Larry Page once built a programmable ink-jet printer out of Legos. Sergey Brin was described as a nerdier Steve Jobs. (Playboy interview) These guys aren’t faking it.

Page and Brin met as graduate students at Stanford, where they created an algorithm called PageRank, which would form the basis of Google as we know it today. The search-engine giant became the fastest company ever to reach $1 billion in revenue. After five years as a private business, they went public in 2004 at a valuation of $27B.

We will not shy away from high-risk, high-reward projects because of short term earnings pressure. Some of our past bets have gone extraordinarily well, and others have not. Because we recognize the pursuit of such projects as the key to our long term success, we will continue to seek them out. For example, we would fund projects that have a 10% chance of earning a billion dollars over the long term. Do not be surprised if we place smaller bets in areas that seem very speculative or even strange when compared to our current businesses. Although we cannot quantify the specific level of risk we will undertake, as the ratio of reward to risk increases, we will accept projects further outside our current businesses, especially when the initial investment is small relative to the level of investment in our current businesses.

“Two hundred thousand years of human beings on Earth- and we are the very last generation to ever know what it was like to be lost.” This was said by the co-founder of one of these smaller speculative bets, Keyhole, a digital mapping start-up. Bill Kilday, Keyhole’s marketing director, tells their story in his excellent book, Never Lost Again.

Keyhole received early investments from Nvidia, and got a desperately needed cash-infusion from In-Q-Tel, a not-for-profit venture capital firm that gets its funding from the CIA.

When Google bought Keyhole in 2004, they gave the newly acquired company “zero direction, unlimited resources, and presented the teams with a secret problem: Twenty-five percent of all queries being typed into the simple white Google search box were looking for a map.”

The newly minted Googlers had a meeting with the bosses on their first day. Larry and Sergey came prepared (emphasis mine).

What percent of the globe do you have covered at one-meter resolution? From what source? At what resolution? Tell us about the satellites. Who makes them? How much do they cost to launch? Are they geosynchronous? What are the size of the sensors? How large is each file? How many servers do you currently have? How fast do the satellites travel…How big would the database be if you covered the entire planet in one-meter resolution detail? I was certain that Sergey was joking. It was the equivalent of turning to Michelangelo after four years or work on the Sistine Chapel and saying, Cool. How about painting the rest of Italy?”

Before the meeting was over, Kilday said,”Larry, Sergey, ten million dollars or ten million users, what would you prefer?” Larry said, “I think you guys should be thinking much bigger than that.” A googol is the number one followed by 100 zeros (Larry Page thought it was spelled Google). They thought big from day one.

On February 8, 2005, Google Maps went live. It took them just 28 hours to reach their two-year earn-out milestone of 500,000 downloads.  Today, their technology is ubiquitous.

Google Maps has 99% coverage of the world, 25 million updates daily, and 1 billion monthly active users. Google Maps laid the foundation for Yelp, Uber, Zillow, and Pokémon GO.  When your goal is to index the physical world, you have no choice but to think big. Google is now in its 15th year as a publicly traded company, and the results have been absolutely incredible. Yesterday, it announced they made almost $33 billion in the most recent quarter, or $83,645 per second.

26% revenue growth y/o/y for a company this size is just wild. 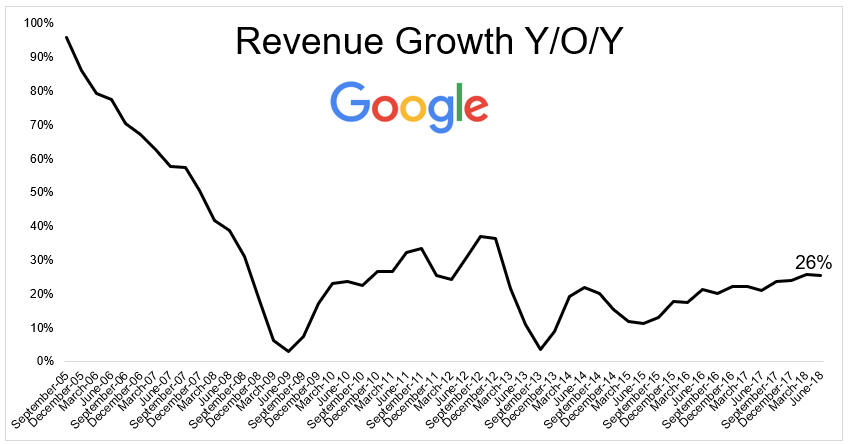 This is amazing- their headcount is up nearly thirty-fold since 2004, and yet their sales per employee has been remarkably steady. Before Keyhole, a single satellite image of an area eight by eight kilometers would cost $10,000 or more. Now you can see every inch of the globe for free. Kilday said, “I had asked Larry to make a choice between making $10 million or having 10 million users. I was off by a factor of one hundred.” Google is a great example of what happens when you combine thinking big with surviviorship bias.