Things were going well for crude oil in 2018. After a few rough years, it was looking to deliver a double digit return, with a 27% gain through early October. The black gold hit nearly $77 a barrel, reaching its highest level in four years. But then, with no warning and without an apology, it swiftly fell 16% from its highs and finished the month with a -11.8% return.  Naturally, some investors were caught leaning the wrong way.

Yesterday The Wall Street Journal reported on an “Oil Hedge Fund Giant Hammered in Crude’s Slide.” The $1 billion Andurand Commodities Fund lost 20.9% in October and is now down more than 12% for the year. Down 20% in a month is brutal, but this performance is likely a lot harder on the fund than its investors.

I’m guessing that few, if any investors have the bulk of their portfolio in a strategy like this. No way to substantiate this, but I’m guessing ~10% is the average exposure to commodities for investors that hold the asset class. If you have a 10% position that goes down 20%, it’s a 2% drag on your overall portfolio. That’s a rough month, but hardly catastrophic. Like I said, the -20% decline              hurts the fund a lot more than it hurts its investors.

It’s easy to get caught up in large numbers, but context is required. The fund has absolutely crushed the broader commodity index going back to 2013 (numbers in the journal story). 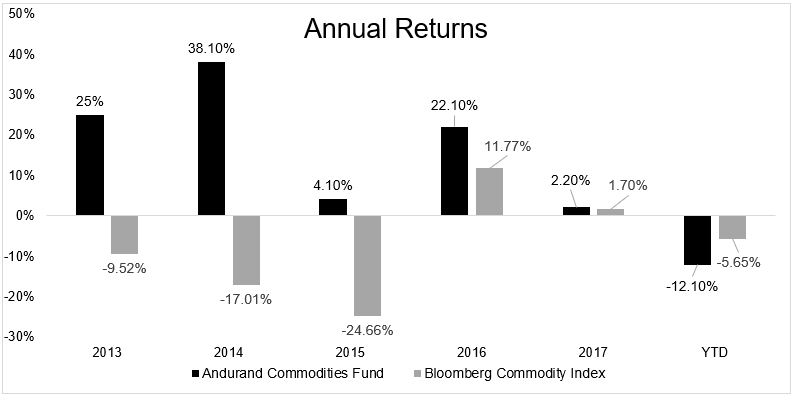 A fund with a billion dollars losing 20% in one month is definitely a story, but often things get lost in the raw numbers. Whether it’s a single fund or a single asset class, it’s important for readers to keep in mind that you’re only seeing a slice of an investor’s portfolio and not the entire pie.