There has been a lot written this year about the shrinking public stock market. Two of the more common reasons provided are the rise and depth of private markets as well as regulations making it more costly to come public. There is a new paper out, Technological Disruptiveness and the Evolution of IPOs and Sell-Outs, that takes a different approach to answer this question.

The basic premise is that the more disruptive a company is, the more likely they are to come public. And the companies tha bring only incremental benefits to established industries are more likely to be purchased by an existing company. The low hanging fruit of disruption has already been plucked, making the relative slowdown in IPOs something that we should expect to continue.

The authors hypothesize that “new innovative ideas are getting harder to discover and develop..the average disruptiveness of U.S. patents has markedly declined since 1950, except for temporary spikes during the 1970s (i.e., computer revolution) and the 1990s (i.e., the internet revolution). A simple comparison of the aggregate evolution of our measure of technological disruptiveness against that of private firms’ exits over the last four decades strongly suggests that IPOs are more prevalent when innovation is more disruptive”

How they measure disruption is interesting. They looked at 506,096 patents and found “strong evidence that startups with more disruptive patents are significantly more likely to go public”

The chart below shows how innovation has changed based on the text within patents. 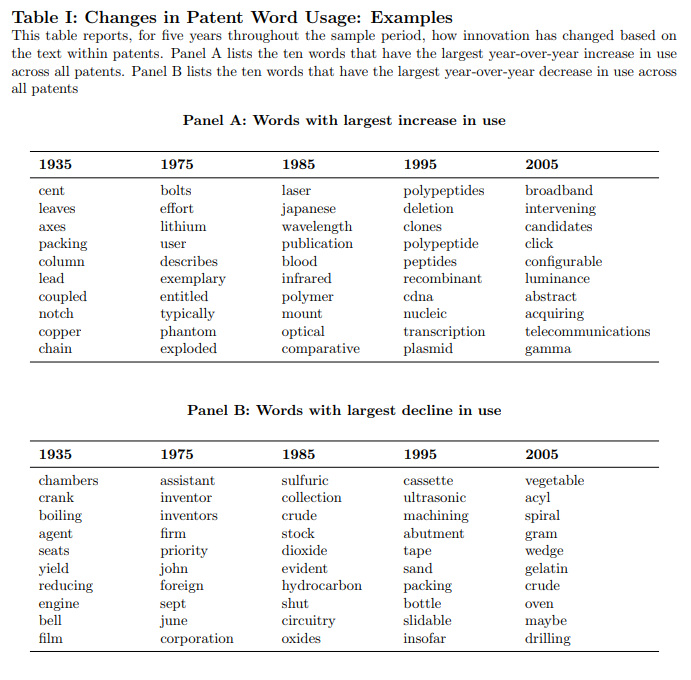 If the authors are correct, it’s going to take true innovation to see a pickup in new public companies. Until we see new fields instead of better widgets, it’s going to be a while until the Wilshire sees 5000 again.

Technological Disruptiveness and the Evolution of IPOs and Sell-Outs