“Apple is so big, it’s running up against the law of large numbers.”

This was taken from a New York Times article in February 2012 when the market capitalization was…$487 billion.

Another NYT article from 2014 states that “What makes Apple’s challenge particularly daunting is the law of large numbers. Its sales are so big that even another new strong product — unless it’s a gigantic hit on the order of the iPhone — won’t lead to the kind of growth to which some investors have grown accustomed.”

The law of large numbers is often invoked when describing Apple and other large companies. This idea, which was made famous by Jacob Bernoulli in the 18th century, has nothing, nothing at all, to do with the size of a company.

Peter Bernstein described this theorem in Against The Gods

What Apple and other large companies are battling is not the law of large numbers, but rather the idea that trees can’t grow to the sky. Think about profits as trees- eventually, and usually it’s sooner rather than later- competitive forces arrive to take a slice of the pie.

The idea that the market is a fiercely competitive arena is clearly presented in this table from Research Affiliates, which shows that “the top dog in each sector lags its own sector by 3.3% per year for the next decade!” 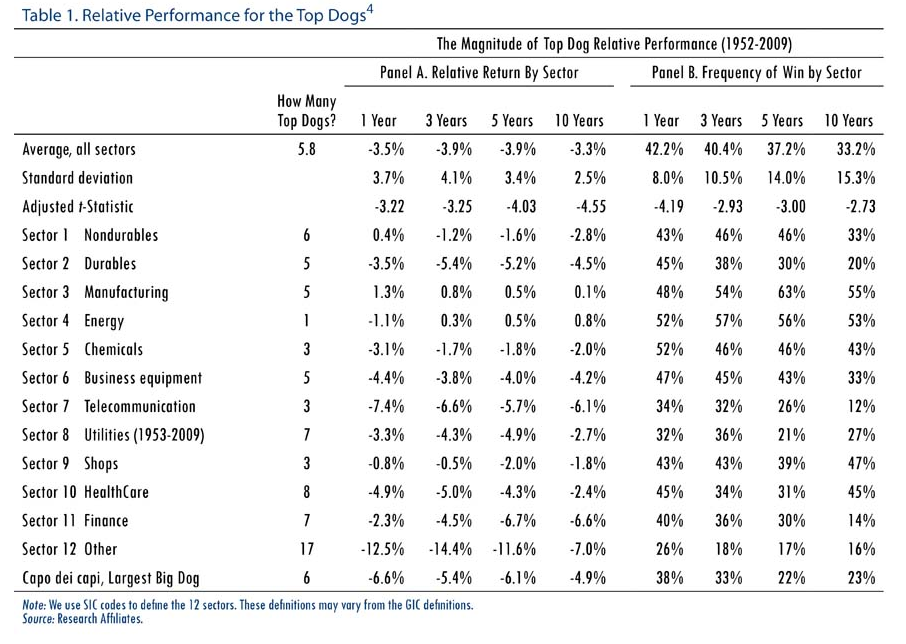 The clock is ticking on most companies from the minute they register their first sale. Geoffrey West wrote about the fate of most companies in Scale:

No matter which sector of what the stated cause is, only about half of the companies survive for more than ten years…Just as all organisms must die in order that the new and novel may blossom, so it is that all companies disappear or morph to allow new innovative variations to flourish: better to have the excitement and innovation of a Google or Tesla than the stagnation of a geriatric IBM or General Motors…The increasing accumulation of rules and constraints is often accompanied by stagnating relationships with consumers and suppliers that lead companies to become less agile and more rigid and therefore less able to respond to significant change.”

An example of these constraints was described by Dan Koeppel in Banana. United Fruit was the dominant player for most of the 20th century, However, when their cash crop, the Gros Michel, was threatened with all sorts of diseases, it was unable to adapt to the life cycle of a Cavendish banana as quickly as its smaller and more nimble competitor, Standard Fruit.

Gros Michel bunches could be thrown in cargo holds and shipped on rough seas without bruising or breaking, as long as they were kept cool. As we know from the mushy spots that appear after a mild jostling in our grocery bags, the Cavendish is nowhere near as hardy. Without another option, Standard Fruit’s engineers tried to find a way to make the Cavendish travel better. What they accomplished, in the decade following World War II, was a revolution, They reinvented the banana industry. Today, that solution appears so simple that it almost seems laughable: Ship the Cavendish not on stems but in boxes. Doing so, however, required a complete overhaul of an infrastructure that had been built up for over half a century…United Fruit’s profit dropped from $66 million in 1950 to $33.5 million in 1955 and to just $2.1 million by 1960.

Large and successful companies, on average, have had and always will have a tough time sustaining their growth. This is probably obvious to most people. But the success and failure of a business is not governed by the law of large numbers because there are far too many moving parts to determine expected outcomes. As Peter Bernstein said, “Dependence on reversion to the mean for forecasting the future tends to be perilous when the mean itself is in flux.”