During a time out at every Knicks home game, a giant spinning air gun is brought onto the court and pointed at the crowd. People of all ages lose their freaking mind, hoping to be one of the lucky ones to catch what can only be described as a parachute sized t-shirt. I’ve never seen one of them, but I’m guessing it has the Knicks emblem, some cheesy wording, and multiple J.P. Morgan Chase logos. It’s worthless. It might get worn to bed, but most likely it stays in the closet until your next spring cleaning and it gets tossed to the curb.

If this was being offered to a passerby on 7th Avenue they would walk right past it without thinking twice.

People act different when they’re in a crowd. Their behavior changes into something completely unrecognizable and predictably unpredictable.

This is the stock market.

Stocks follow a mostly random walk in the sense that nobody knows what tomorrow brings. They also follow a mostly random walk in that the distribution of daily returns is about as close to bell shaped as something outside of a coin toss can be. The chart below shows the daily changes in the Dow Jones Industrial Average going back to 1920 (h/t Nick) 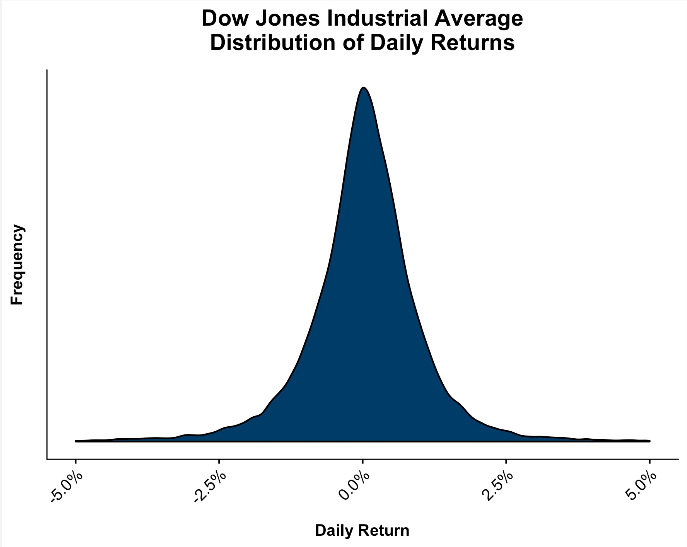 What charts like this hide however are the fat tails. These tails are made up by the days that should not happen as often as they do if the curve were a perfectly normal distribution.

The market makes mincemeat out of people foolish enough to predict its short-term direction.

Last week was the best week for stocks since 2011. This week it gave back all of those gains and then some. Gut wrenching swings are normal when markets are driven by the same crowd of people who lose their mind for a t-shirt they wouldn’t pay $1 for.

I’m fond of saying that the simplest explanation of the way the stock market works is that rising prices attract buyers and falling prices attract sellers. This is too clean a description however, because the transition from buyers to sellers is a mess. This tug of war is emotional and volatile and brings out some of the worst investor behavior. Buying and selling and relief and regret all in a matter of days.

It’s when the sellers finally do gain control, paradoxically, that stocks experience their strongest days.

Take a look at the chart below which shows the number of days where the Dow gained 3% over the previous twelve months. You see spikes in the Great Depression, the crash of 1937, the mid 1970s bear market, 1987, the bursting of the tech bubble and recently during the GFC. 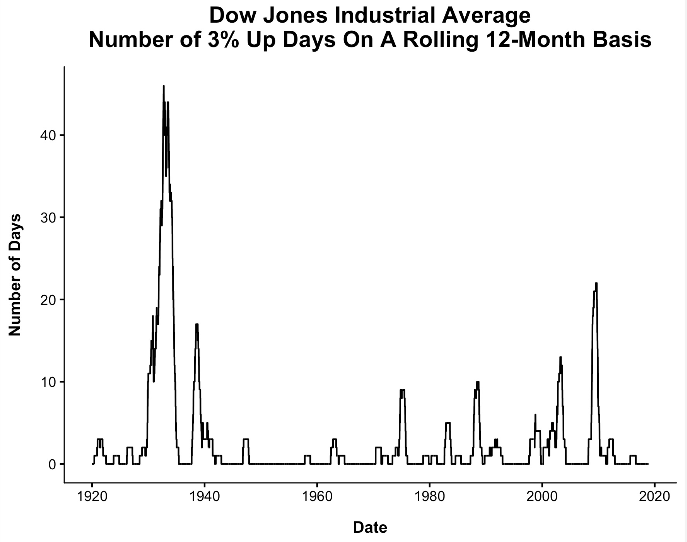 Bull markets are not defined by wild buying frenzies. There was not a single +3% day for the Dow from 1992 through September 1997. Bear markets on the other hand are littered with them. From 1945-today, when stocks gain 3% in a day (N=103), the Dow is in an average drawdown of 24%

From 1992 to today, 84% of the +3% days occurred below the 200-day moving average, as you can see in the chart below. Hope springs eternal, and it doesn’t take much for the fear of missing out to kick in. Bear markets are painful not just because you’re losing money, but because of the salt of false hope that’s poured into the wound of a bleeding portfolio. 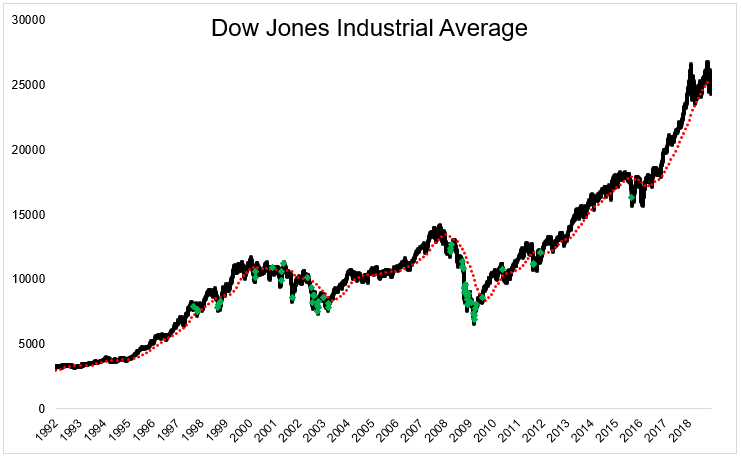 I don’t think any of what I just described discredits the idea that the the market mostly follows a random walk. And if the market is mostly random, does that mean it is mostly efficient? Well that depends. If efficient means that the price is right enough so that the majority of people can’t consistently determine whether it is too high or too low, then yes, the market is efficient. But are markets efficient in the sense that prices are always correct? No, I don’t think anybody believes that to be the case, not even the author of A Random Walk Down Wall Street.

Efficient markets does not mean that the price of every security at every moment in time is correct. In fact, prices are always wrong. Let’s say that stocks are valued…as the present value of all of the dividends you expect to receive from them in the future. Well, that’s the key element. It’s in the future. I guess it was Yogi Berra and lots of other people have said, “It’s hard to make predictions, especially about the future.” And so prices are always going to be wrong. And the problem is we don’t know at any time whether they’re too high or too low.

Market’s can’t be completely random when a crowd of humans are predictably insane. But just because people are crazy, as Meir Statman once said, “that doesn’t make you a psychologist.”