I did a post a couple of weeks ago about the potential benefits of dollar cost averaging.

I explained that it was no panacea and that the only reason why this had higher returns than the market over this period was because of sequence of returns, which cuts both ways.

But this disclaimer wasn’t good enough, because every time you write about the benefits of long-term investing, specifically of the buy and hold variety, you have people who say “now show Japan.”

It’s true that the efficacy of buy and hold investing is challenged through the lens of a Japanese investor. As the chart below shows, you could have made regular contributions from 1971 through 2012 and still have not made any returns on your investment. 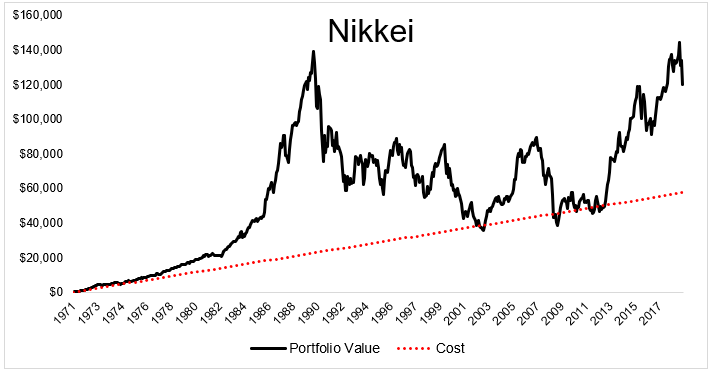 So, is Japan proof of the fact that buy and hold is for the birds? I don’t believe that. I wrote a post a few months ago about how people who say this might have learned the wrong lessons from the epic Japanese stock market bubble.

Josh and I speak about this in the video below.