Should you rent or should you buy?

Whether the item is a car or a home, this is a big question that does not fall neatly into the “yes” or “no” pile. There are hard and soft factors to consider, and like everything else in life, tradeoffs abound. Consider the case of a home.

We bought our apartment in December 2015 and in a few weeks we’ll be moving out. We did not plan on leaving so soon, but hey, that’s life.

Last week I was going through the economics of owning my home and I wanted to share them with you. This will show the ridiculousness of the question “did you make money when you sold your home?” The complicated answer to this overly simplified question is not merely the difference between the purchase and sales price.

The numbers below were normalized for a $10,000 down payment. I’m sure there are some things I’m not remembering but this is a pretty good approximation.

The maintenance, mortgage, insurance, and assessments combine to make up my annual cost. I multiplied that by 38 months and added it to my down payment to come up with total costs (in red). 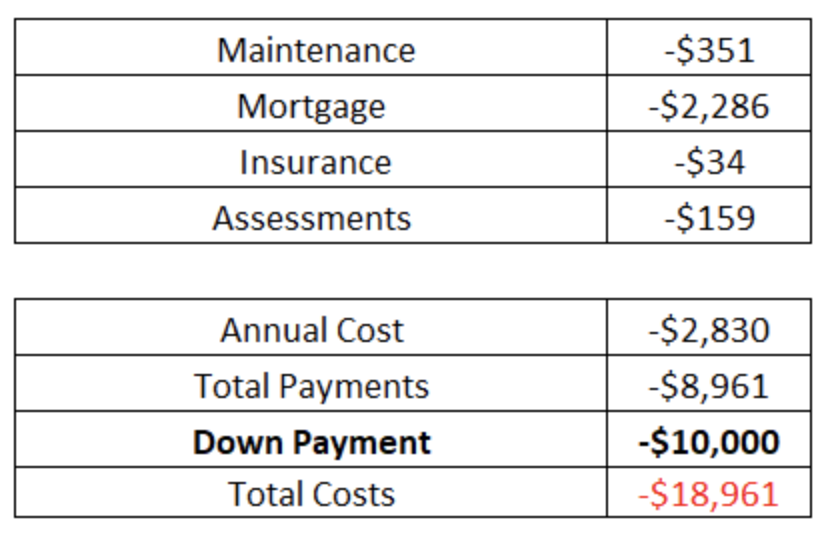 More than 70% of our total mortgage payments went to interest, so we didn’t make too large a dent in our principal. On the positive side, there was a large tax benefit to being able to deduct the interest.

Because we’re leaving before four years we have to pay the building a flip tax of 1%. This sucks but we knew this was in place when we signed our contract. To soften this blow we sold the apartment without hiring a broker (We worked with a buyer’s broker who we’re paying 2%). Fortunately, we sold the apartment for 4% more than we  paid for it. All of this- the 4% appreciation, the 1% flip tax and 2% to the broker- is reflected in “sold for” in the table below.

Finally, I netted the difference between my total costs and total proceeds, which was further broken down into annual and monthly installments.

There is one final thing to consider. What if I was renting and invested the down payment? I’m using the all-country world index as the proxy, which is up around 25% since I bought my apartment. In this case, the cost of owning goes from 54% of renting to 73% of renting.

The debate between renting or buying is a personal one and often times there are more important things to consider than just dollars and cents.

While owning my apartment worked out well financially, as I just showed, there was still a very real cost involved. The idea that you’re going to make money on your home, especially after inflation, is probably not realistic for most people.

This is obviously just one example so I’m not suggesting you use our numbers to make your decision, I just hope this shows that there are a lot of expenses which probably don’t get spoken about enough.