Chris Bosh, two-time NBA champion, was recently on the Bill Simmons podcast talking about the unhappiness of today’s superstar.

It’s hard to imagine how a 23-year old kid who signs a five year, $127 million deal could be anything other than giddy all the time. This type of thing is possible because the 23-year old was once a 19-year old who signed a four year, $23 million deal.

$127 million is a ridiculous amount of money, but so is $23 million. What can you do with $25 million a year that you’re not already doing with $5 million? The second contract didn’t change his life, it just took him from rich to richer, which doesn’t move the happiness needle.

We’re all familiar with the hedonic treadmill, which is the tendency to quickly return to a stable level of happiness despite major positive or negative life changes. Our innate ability to adjust to a much higher or much lower standard of living can be a miracle or a tragedy depending on how you see things.

There is a story, which probably never happened, about John D. Rockefeller being asked by a reporter, “How much money is enough?” He responded, “Just a little bit more.”

The chart below shows people’s actual relative income versus their perceived relative income. The richest people, according to this data, feel like their peers have more money. Everyone, except paradoxically for those at the bottom, think everyone else has more. 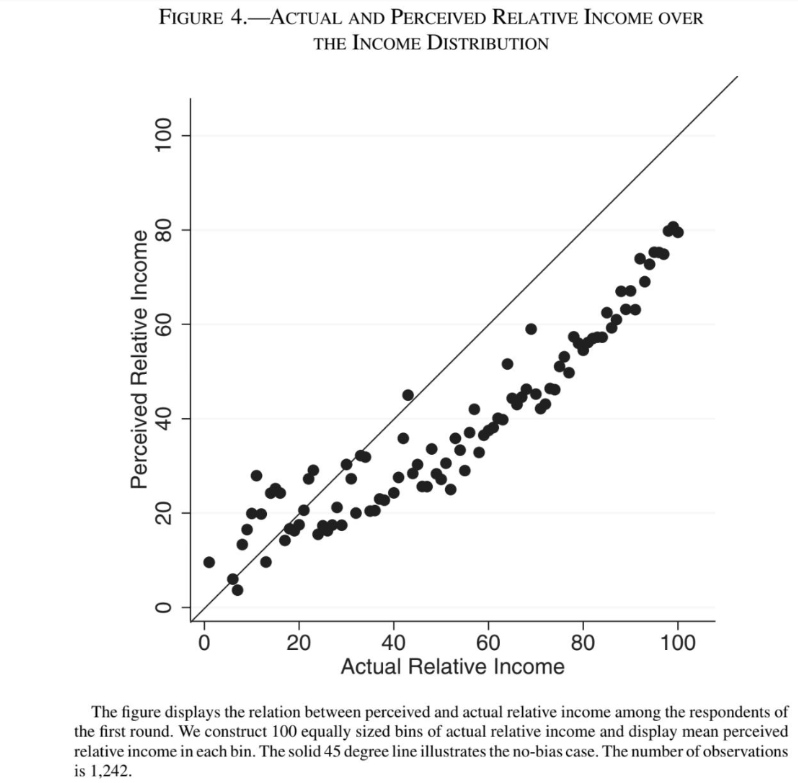 I don’t know that rich people are necessarily driven by more money. I doubt Jeff Bezos gets up and goes to work every day so that he can increase the gap between he and Bill Gates. But he is driven by more, and the U.S. consumer is better off because of it.

The fact that we can never have enough is sad. Not sad like I feel sympathy for them, but sad in the sense that people can waste their entire life thinking that the next thing will make them happy; the next raise, the next car, the next house. But that’s just not the way life plays out. As Jason Zweig once said, “The fires of anticipation are so easily quenched by the cold water of reality.” The cold water sucks for each of us, but it’s good for all of us.

For more on this topic:

Why Are People Miserable at Work?