It was a good run. In the five years leading up to the worst week ever, the NASDAQ Composite gained 445%, compounding at 40% a year. For some stocks it was even better. Cisco, Qualcomm and others made the index look like a snail.

But then, in just one week, it all came crashing down.

The daily returns for the NASDAQ Composite for the week ending in April 14th, 2000 were as follows:

In just five days, the index shed a quarter of its value. Qualcomm and Amazon each lost 30%. 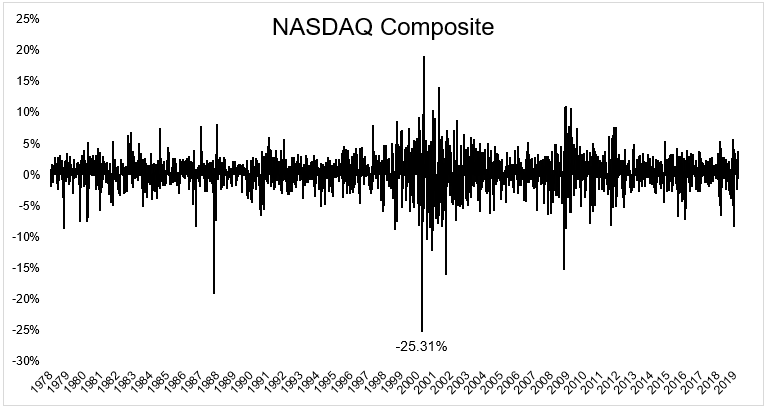 The 25% weekly decline, the worst ever for the NASDAQ Composite, was front page news. 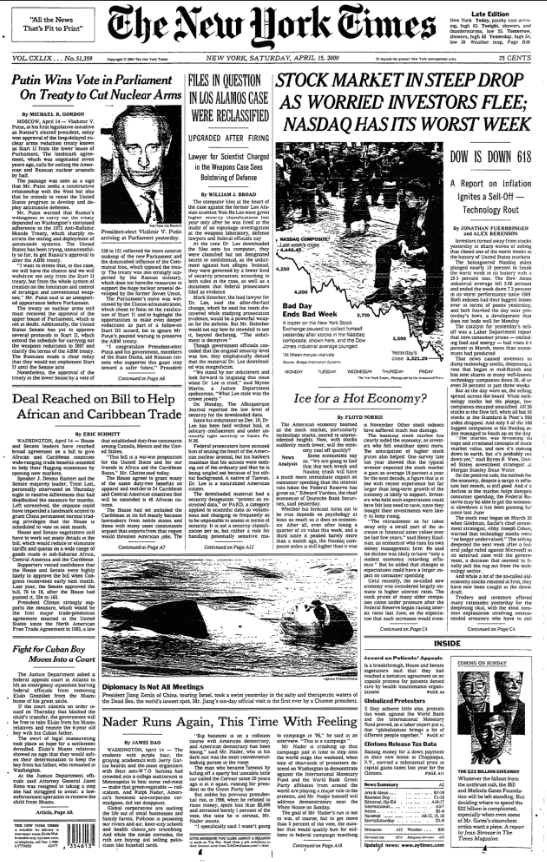 As is always the case, the newspaper needing to cite a catalyst, turned to core consumer prices rising more than economists had predicted.

The New York Times spoke to investors who were feeling the pain:

His largest portfolio, at Prudential, had fallen from $1.8 million to under $1 million. Still, Mr. Malhotra has no plans to sell. ”I have no choice,” he said. ”I have to hold on until they come back.” 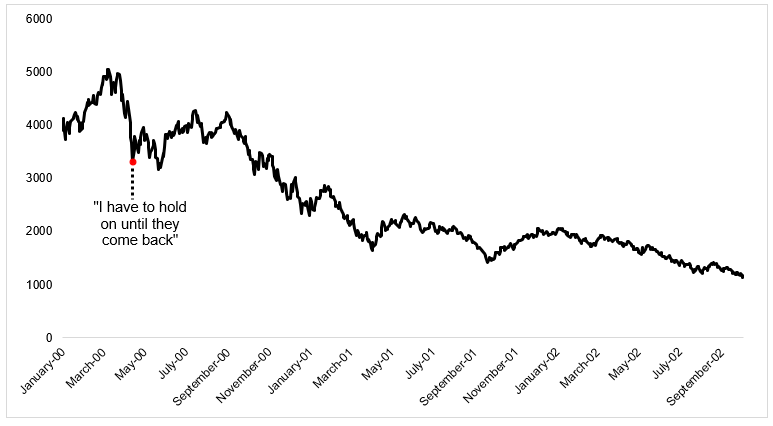 Mr. Malhotra likely breathed a huge sigh of relief when tech stocks gained 6.6% on Monday and 7.2% on Tuesday. But this rally, as can only be revealed by history, was to be short lived. Over the next two and a half years, the NASDAQ Composite lost another two-thirds of its value.

I couldn’t read Mr. Malhotra’s comments without wondering what my portfolio would have looked like both while the bubble was inflating and then after it popped. Would I have sold that week? Would I, like Mr. Malhotra held on until they came back? This is why it’s important to have at least a basic understanding of market history. It allows you to ask the question, “What would I have done and what sort of lessons would I have taken away from this experience?”

Looking backwards shows that the market delivers high highs and low lows, which is why buying and holding, though likely to deliver the best long-term returns, can be excruciatingly difficult. It’s easy to be overconfident of our ability to withstand deep losses, given that they haven’t come around in a while. But history shows that most people have a breaking point, and it’s your job as an investor to stay as far away from that line as possible line while also getting close enough to it to reach your financial objectives. Nobody ever said this was easy.

Studying the past doesn’t reveal the future, but maybe it can help to crystallize how you should think about how you invest in the present.