Vanguard is out with a new monster research report called How America Saves.

There are more than 100 million Americans with a defined contribution plan, holding more than $7.5 trillion in assets. Vanguard did a study at the DC plans on their platform, which has more than 5 million participants. Here are some of their key findings. 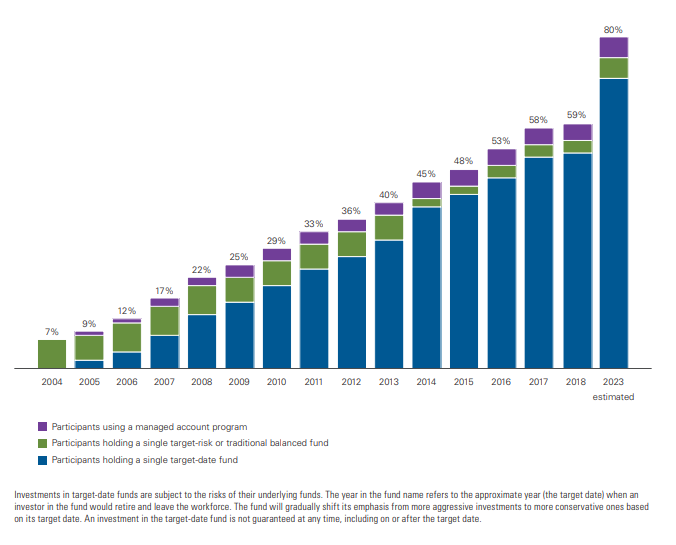 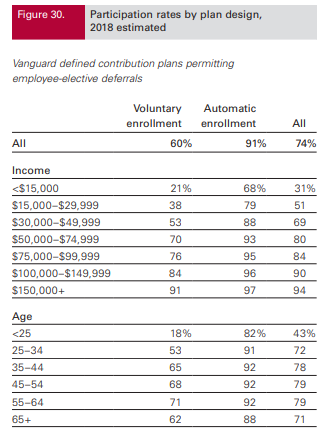 The median savings rate, which combines employee and employer contributions, has been steady at around 10% for the last 15 years.

The average balance is $92,148, but the median is only $22,217. Median participant age is 44. This on its face sounds pretty bleak, but its important to keep in mind, as I was reminded yesterday, that people can have multiple DC accounts due to leaving previous jobs.

Such a large gap between average and median exists because one-third of participants had a balance of less than $10,000, and one quarter had balances over $100,000. Because of the skewed distribution in participant balances, 75% of all participants have balances below the average. 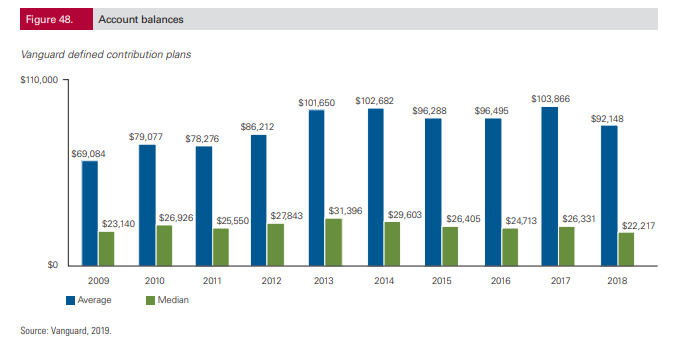 The chart below further breaks down the distribution of account balances.

Finally, the chart below breaks down account balance by income and age. 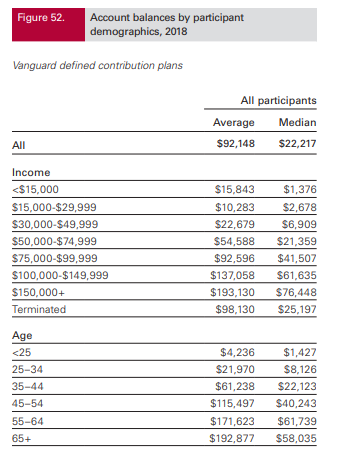 The chart below shows participation rates by demographics. There has been a pretty steep drop-off in participation for people under 25 years old, from 57% in 2014 to 38% in 2017. I wonder if student loans have something to do with this. 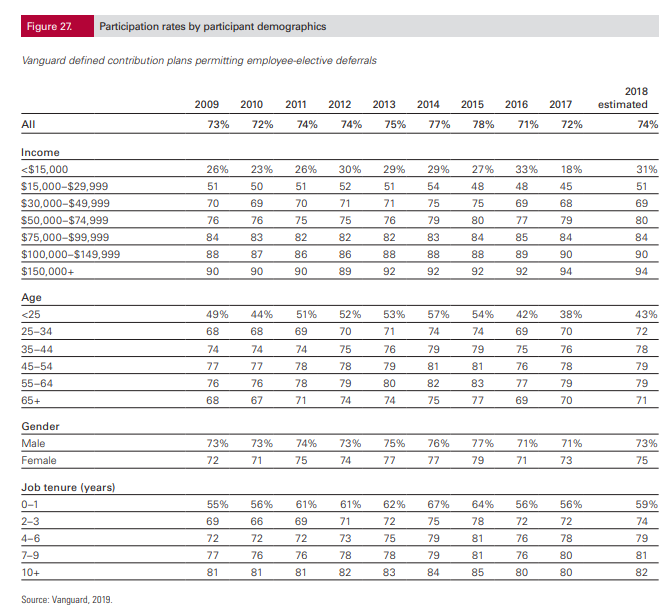 The chart below shows how much people are choosing to save. These numbers are pretty encouraging. Let’s say a 25 year old is making $50,000 a year, and their salary goes up 2% annually, and they earn 5% a year, by the time they’re 65, they can have 600,000. Assuming they’re getting an employer match and they’re saving 10% of their salary, this jumps to $900,000. Compound interest takes a while to work its magic but when it does the results are extraordinary. More than one-third of that $900,000 is added in the last 5 years. 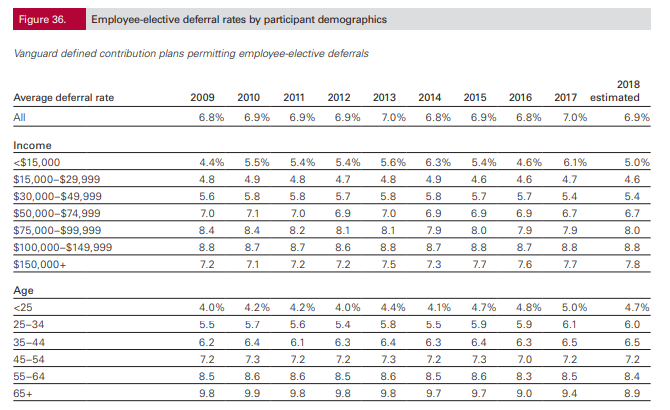 The chart below shows overall asset allocation in these plans. The biggest takeaway for me here is the cash number. There is way too much of it. Outside of a retirement account, I see nothing wrong with holding six months of living expenses or something like this. Inside a retirement account, I can’t think of a good reason why 9% of your portfolio should be earning next to nothing. 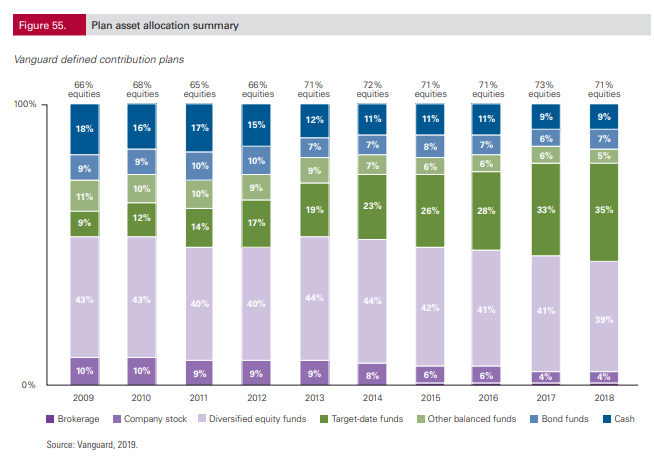 Concentrated positions in company stock has fallen dramatically over the last decade. In 2009, 30% of participants in a plan that offered company stock had at least 20% of their assets in the company they worked for. That number fell to 19% in 2018.

Target date funds are being most used by younger participants. I think this is fantastic. If your retirement account says a year, 2060 or whatever, it gives it purpose and makes it less likely that you are going to tinker at the first sign of trouble. 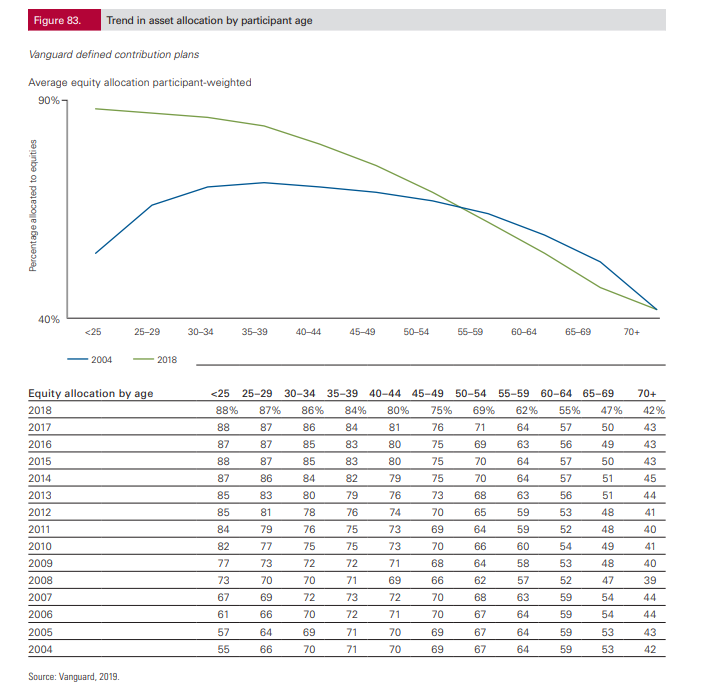 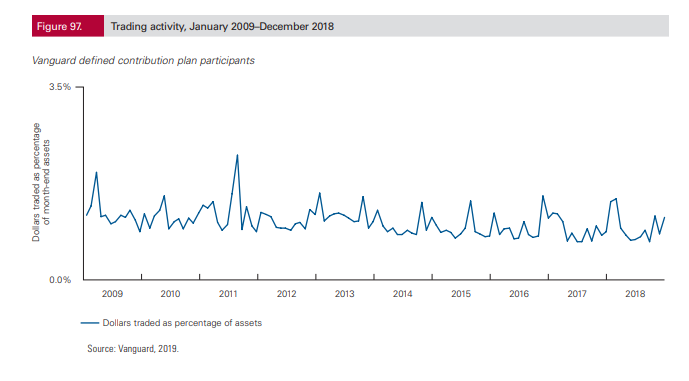 The chart below breaks down trading by gender. In 2018, men were twice as likely to take action as females. 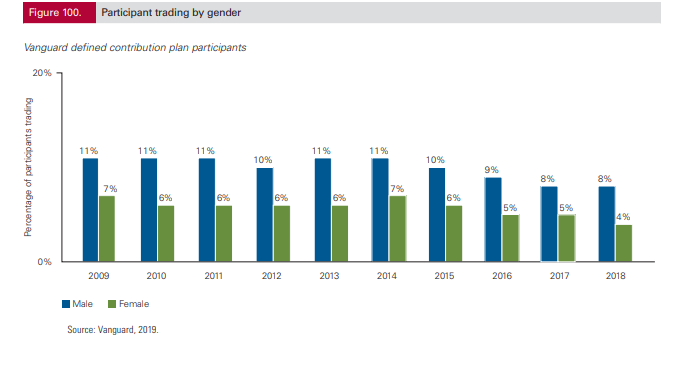 I was actually fairly encouraged by what I saw. I am concerned about folks today approaching retirement, but I’m fairly sanguine on the ability of young people to prepare themselves for a decent retirement. Check out the report for more details