On the podcast this week I spoke about a big story that seemingly went unnoticed. Apparently, the most commonly cited data on buybacks isn’t accurate. Yes, you read this right. The data doesn’t account for the fact that two-thirds of buybacks are done to offset employee stock ownership plans. Here’s a representative from the Fed in an email to Barron’s:

The current source for equity issuance data in the Financial Accounts of the United States does not fully incorporate issuance to employees by public corporations. Staff is exploring how best to reflect such issuance activity in future releases.

Ed Yardeni uncovered this inconsistency and I wanted to learn more. So I picked up this short book, Stock Buybacks: The True Story.

I know this topic has been covered to death so I’ll keep this brief.

The two main points in the book are that buybacks are misunderstood both by politicians who argue that it exacerbates income inequality, and the bears who argue that it is manipulating the market higher. Yardeni and co-author Joseph Abbot take a sledge-hammer to both arguments.

“Most companies don’t view buybacks as a means of returning cash to shareholders but, rather, as offsetting all or most of the dilution caused by stock compensation.” This can be seen in the data. For example, Yardeni and Abbott explain that from 2011 through 2018, large cap companies repurchased 72 billion shares and issued 50 billion shares, resulting in net repurchases of 22 billion shares. 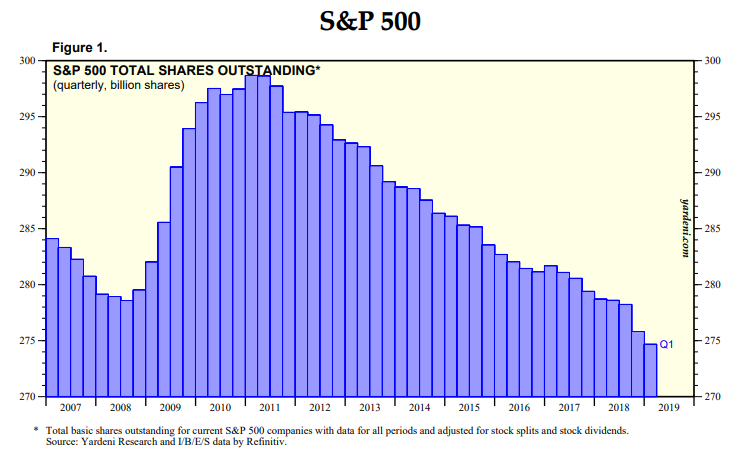 When you talk about trillions of dollars in buybacks, jaws drop. But we must not fall prey to denominator blindness. When you look at the fact that buybacks were 0.67% of S&P 500 market cap in the second quarter, you have to ask, where’s the buyback beef? 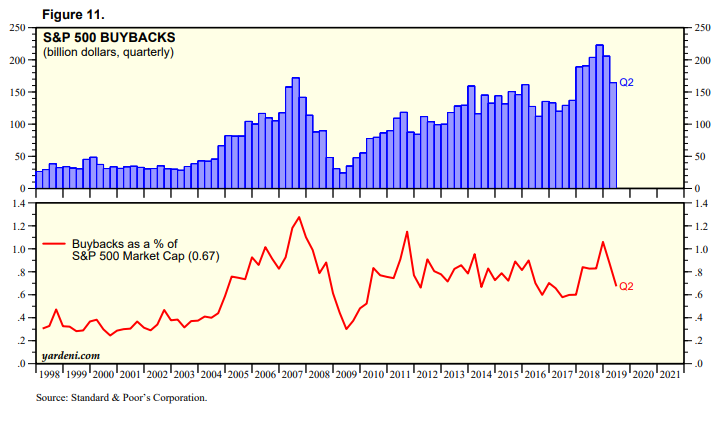 Finally, from 2011 through 2018, the annual average spread between the total earnings and earnings per share was just 1.3%. If buybacks really were goosing EPS, you would expect the red line to have grown faster than the blue line. It hasn’t. 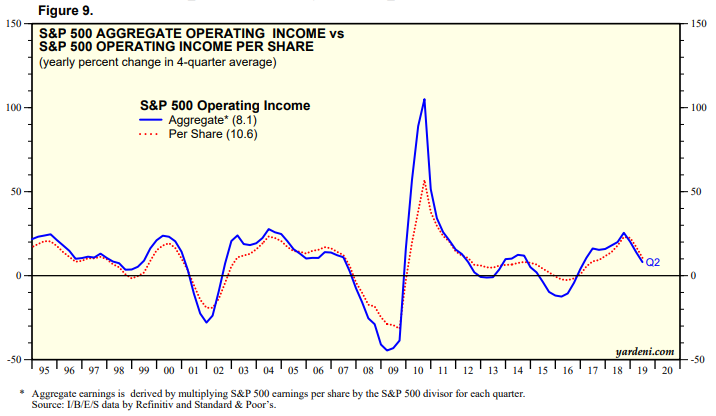 It’s incredible that one of the most talked about topics in all of finance has been relying on faulty data. I know this has been covered to death but I felt compelled to share this.

Click here to find all of the charts in this book.

Two quotes I thought summed it up nicely:

“To a large extent, the bull market in stocks has been boosting buybacks, rather than the other way around as widely believed.”

“The ultimate source of funds for most stock buybacks is the employee compensation expense item on corporate income statements, not bond issuance as the bears contend.”