“Stock prices have reached what looks like a permanently high plateau.”*

Everybody is familiar with this quote from Irving Fisher, which appeared on the front cover of the New York Times on October 16th, 1929. This will live on forever because just eight trading sessions later, the Dow crashed 13.47%. The following day it fell another 11.73%.

That permanently high plateau would not be seen again until the winter of 1954.

There is another Fisher quote that doesn’t get nearly as much attention and one that I only just learned about thanks to  Jason Zweig **  Two weeks later with stocks down more than 20%, Fisher said “It now looks as though the bottom of the market had been found and many are taking advantage of the opportunity to come back and invest again.”

These two quotes have made Irving Fisher a first-ballot member of the financial freezing cold takes hall of fame. 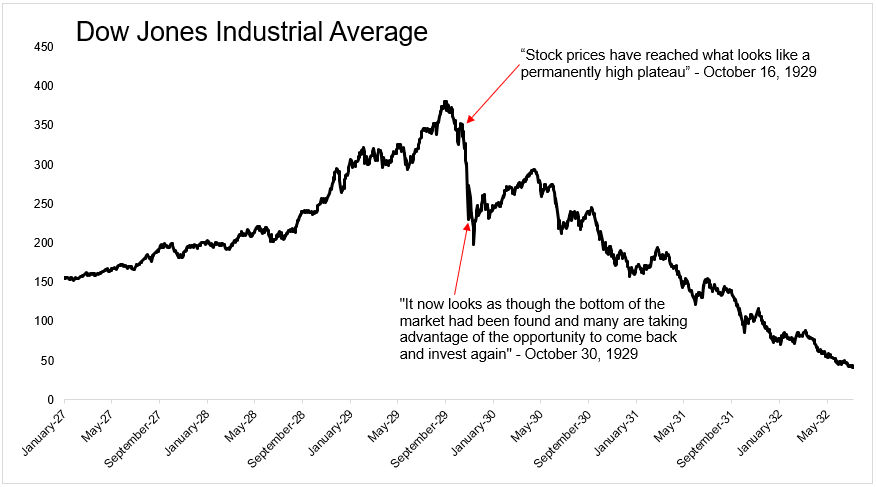 It has been ninety years since these statements were made and you would think we would have learned by now that peering into the future is impossible. We laugh off predictions made by palm readers or fortune tellers but we listen when people tell us what will happen in the markets. Ben Graham absolutely nailed it when he said, “Nearly everyone interested in common stocks wants to be told by someone else what he thinks the market is going to do. The demand being there, it must be supplied.”

Oh it is supplied alright.

Barron’s did their big money poll where they got opinions from 134 money managers on a various array of topics:

They also answered 8 questions on politics and 7 on policy.

*SCREAMING* Imagine having an opinion on the future direction of stocks and commodities and interest rates and GDP and politics and policy!?!

Spencer Jakab wrote a piece about the follies of predictions, specifically those that are bold and use esoteric methodologies. One of the people he highlighted was Robert Prechter, “who claims he predicted the 1982 bull market using an arcane “wave” theory and has since reaped millions of dollars from subscribers, has made several shocking predictions over the years, such as the Dow falling to between 1,000 and 3,000 back in 2010.”

It’s hard to judge the accuracy of these forecasters but thanks to a study a few years back by CXO Advisory Group, we have the receipts. They collected 6,582 forecasts for the U.S. stock market from 68 market commentators. They found the average accuracy to be 46.9%, slightly lower than what you would expect from flipping a coin. Coming in dead last, with 24 forecasts and an accuracy of 20.8% was Robert Precther.

This should be so self-evident that it feels weird typing it, but assume that nobody can see the future. It doesn’t matter how many billions of dollars somebody manages or the latest call they got right. The less time you waste paying attention to this sort of nonsense, the better off you’ll be.

*He also said, “I believe the principle of the investment trusts is sound…But I agree with Roger W. Babson that many market operators had better get out of debt and out of margin account, that there is some unwarranted speculation, and that the market may be at its peak now and for several months to come. While I will not attempt to make any exact forecast, I don not feel that there will soon, if ever, be a fifty or sixty-point break below present levels such as Mr. Babson has predicted.

In reply to one question, Fisher said that he “expected to see the stock market a good deal higher than it is today, within a few months.”

**Jason said “Fisher is unjustly maligned, btw. He was a brilliant economist, and his book “The Stock Market Crash — and After” is great.”