Performance is one of the most mean-reverting data sets in the financial universe*. What goes up must come down and what goes down sometimes comes back up, eventually. 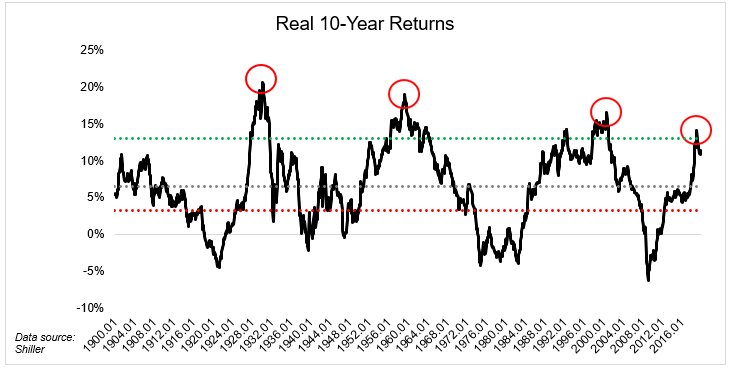 The bad news is that we have just experienced a decade where returns ran at more than twice the average historical returns. When they’ve been this extended, returns have tended to fall sharply in the following decade. The good news is that if we extend this data set to a longer horizon, we see that returns over the long-run haven’t been nearly as high, in fact they’ve been well below average thanks to two market crashes during this time period.

Mean reversion might be the closest thing that financial markets have to gravity, but people will see these two charts and come to six different conclusions. Even data is in the eye of the beholder.

Nick Maggiulli will be running a piece next week that looks at similar data. Be sure to catch it, he’ll be including some truly mind blowing numbers and charts.

*This idea came from this killer chart from Jim Bianco