We (re)learned a few things about risk assets over the past few weeks. One of the most important takeaways from the recent correction is that treasury bonds are the best place to hide during a dislocation in the stock market.

Over the same time, Bitcoin, which had been touted as a risk off asset, has declined more than stocks. 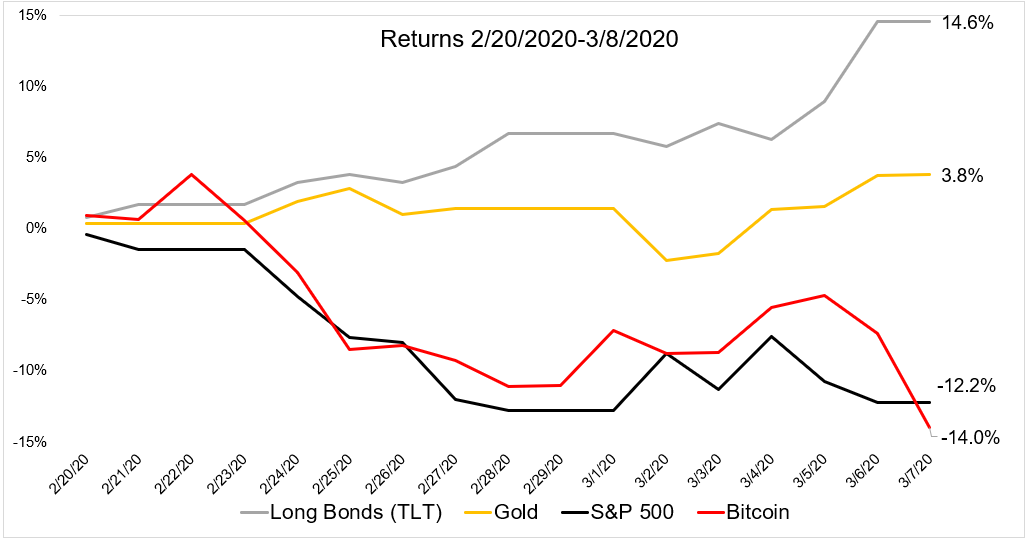 This is not a knock on Bitcoin, which remains one of the truly independent asset classes in the world, making it potentially the ultimate diversifier in a traditional portfolio. I point this out to say that non correlated does not mean negatively correlated. You can never guarantee that something will go up when something else goes down, but when there is a real flight to safety, U.S. Treasuries are still the best place to be.

I was excited for Amazon’s Hunters, starring Al Pacino. The basic premise of this show is that Nazi’s are in new York City in the 1970s and are plotting their rise again. A group of Nazi hunters, led by Al Pacino, is doing everything they can to stop them. I can’t say much more about it because I bailed during the 3rd episode. It was watchable, I guess, but after 2.5 hours I had seen more than enough to know I didn’t want to waste another 8 hours.

I turned on Netflix yesterday and was pleasantly surprised to see a new Mark Wahlberg movie, Spenser Confidential, on the home screen. I’m a fan of his action movies, even if they’re not very good. Four Brothers for example, nothing to write home about, but it was fun. Spenser Confidential on the other hand, not good, and not fun.

The nice thing about watching HBO is that you know they’ve committed the resources to put out quality television. They can only make so many new shows in a year, so their hit rate is solid.

Amazon and Netflix are not burdened by the shackles of time slots. Their model is to spray and pray, which is why I’m from now on I’m going to wait for reviews before watching something new. There’s zero need to be first.

This was my favorite exchange about how we adapt to changing market conditions.

Feel like you can get accustomed to chaos pretty quickly. Down 1,000 points loses its shock when it's happened 5 times in the last 10 days.

I hope everybody stays healthy and has a productive week.