95% of all stocks in the S&P 500 are down year-to-date. The selling has been merciless, but it has not been indiscriminate. The market has done a good job reflecting what’s going on in the real economy.

Energy has been the hardest hit sector, with the double whammy of the price war between the Russians and the Saudis coupled with the dried up demand. 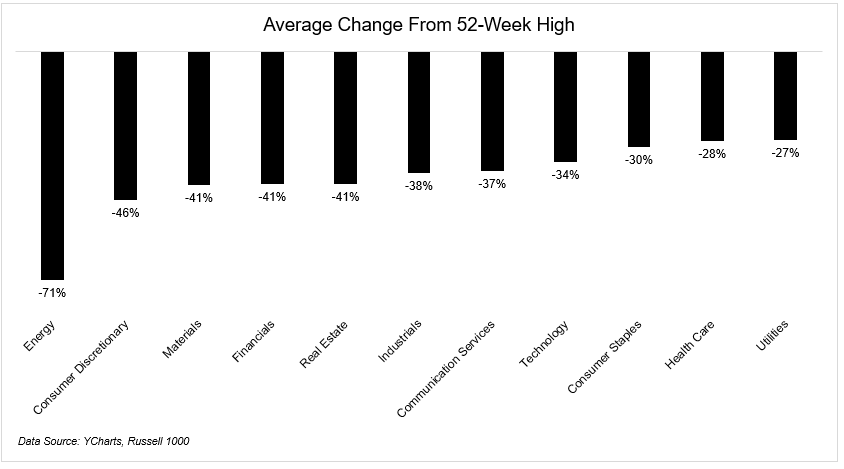 I wanted to look under the hood at different industry groups to see which areas have been hit the hardest.

Exploration and Production (-76%) This number reflects the average change from the 52-week high for each group.

These companies have $85 billion worth of debt maturing over the next four years. How much of this actually gets paid back?

Carnival Cruise is down 82% so far this year. I can’t imagine that all of these Cruise companies make it through to the other side of this.

This company recently announced that they will revoke their first quarter dividend. I wonder what sort of dividend cuts we’ll see compared with previous bear markets.

Simon Property Group, which is the largest owner of malls in the country, is down 68% in 2020 alone. They recently furloughed 30% of their work force, so you have to think their dividend, which currently yields close to 18%, is at significant risk.

It’s hard to believe, but Harley Davidson had a bigger market cap than Apple in 2004.

This has been in a secular decline long before 2020, but it’s still amazing to see its market cap under $3 billion when it was $19 billion in 2006.

MGM, Wynn, and Caesars are all down more than 75% from their all-time highs. The casino industry’s best days are long behind them.

Marriott was at an all-time high at the end of 2019. It has declined 58% in the first three months of the year.

Mohawk Industries, the world’s largest flooring provider, is down 51% YTD, and is nearly 80% below its December 2017 highs.

These stocks were looking really healthy before all this happened.

Just six weeks ago Lennar was right near its all-time high. It was up almost 30% in the first few weeks of the year, and now its down 38% for the year, after falling 51% from its high.

These companies are as exposed to small businesses as any other area of the economy. Texas Capital Bancshares, for example, is down 81% from its high in May 2018.

Six flags is 84% below its highs from June 2018. When do they reopen? Are group activities done for the foreseeable future?

Lionsgate is down 85% from its high in January 2018. The current debt-to-equity ratio is 100x. Movie theaters are in a world of pain, as are the studios. The future is in question for these companies.

Dick’s Sporting Goods is down 64% in 2020. Malls are closed, sports are gone. This one is in the eye of the storm. They just announced they’re closing their stores for two weeks.

Grub Hub was having a tough time before the Coronavirus. You would think that people staying home would be a tailwind for the company, but they can’t seem to get out of their own way.

Grubhub announced last week that, between the hours of 5 to 9 PM, customers could order takeout or delivery through its platform and receive $10 off orders of $30 or more. It sounds like a good deal, until you realize that while Grubhub is promoting the offer on behalf on restaurants, it’s also contractually forcing those business owners to eat the cost of that discount for every eligible order.

Domino’s Pizza has been one of the best performing stocks of the last decade, with nearly twice the gains of Amazon. It’s run continues, with an 18% YTD gain.

The stock market is reflecting the pain in the real world. I have zero doubt that the economy will eventually recover, but I have serious doubts that it will ever look the same.

There are going to be people, and businesses, and entire industries that never come back. All I can say is the obvious, which is that I hope we get past this as quickly as possible.