Here was his response:

This is the irresistible force meeting the immovable object. We have the biggest, sharpest GDP decline in history, this is absolutely unprecedented. This is not a financial crisis where credit issues are transmitted to the real economy. The economy just stopped. There is no model, there is no precedent, there’s nothing you can look to for what just happened. So it is inherently unpredictable. On the flip side we have significantly more fiscal and monetary stimulus than at any other point in history, any other recession. In any measurable way this is the most aggressive Fed we’ve ever seen.

From an investing standpoint, I’m very curious to see what plays out. On the one hand like Gavin said, we’re experiencing the quickest destruction in business fundamentals that we’ve ever seen, and on the other, we have the biggest injection of liquidity that we’ve ever witnessed. Whatever the outcome, this period in time will be studied and dissected for as long as markets exist.

One other factor at play are valuations. Did high valuations add fuel to sellers’ fire? It’s impossible to say with any certainty, but I don’t think so. I tend to think that valuations don’t matter during panic selling.

Nevertheless, I think it’s noteworthy that the CAPE ratio went from 33 last year to 23 today.

Multiples are going to look all messed up in the coming quarters, so I think now more than ever it makes sense to look at the CAPE ratio, which smooths out the earnings variability that we’re about to experience. 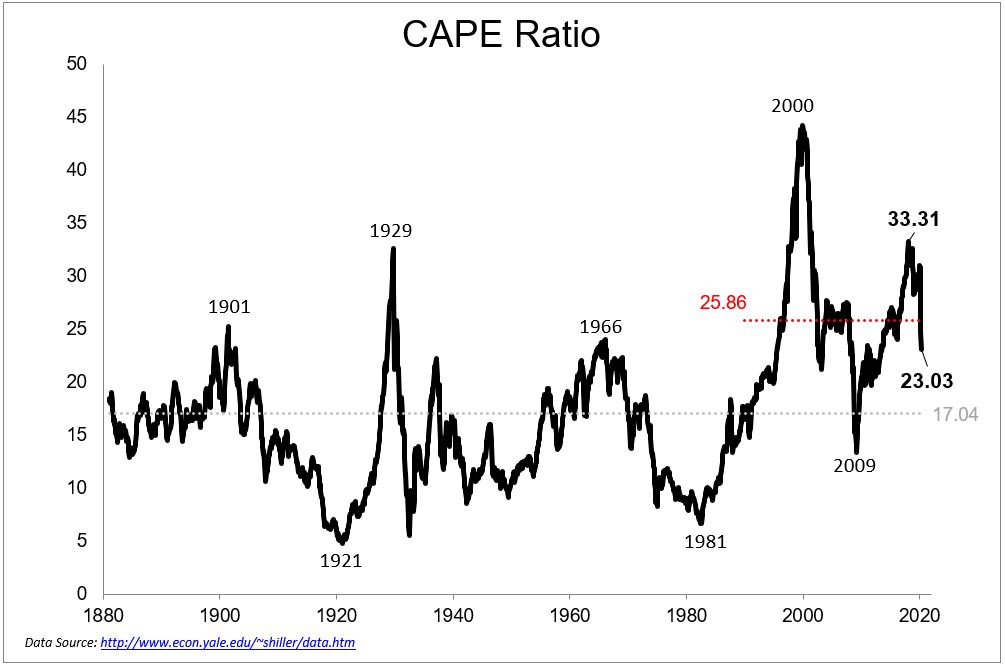 The CAPE ratio is still above the long run average of 17, but considering that it dipped below it in 2009 for only a couple of months, even after a nearly 60% decline, that should tell us all we need to know about this data series. The long run average, which includes numbers from the 1800s, should be taken with a huge grain of salt. The average has been rising for a few decades now and in fact, the CAPE is currently below the average from 1990-today.

The CAPE ratio does a fairly decent job at predicting long-term returns, but it’s useless over the short term. While I do think that long-term returns are more attractive today than they were a few months ago, the next few days and weeks and are going to be all about an irresistible force versus and an immovable object.