A common question in my inbox these days goes something like this:

Should we be freaking out about inflation coming?

Okay, that was an actual question, and more and more of them have been coming in over the last few weeks.

The basic thinking is that we’re printing record amounts of money, which might decrease the value of our currency. But if we’ve learned anything since the great financial crisis, it’s that the amount of money in circulation does not necessarily cause inflation.

The chart below shows that the money supply has doubled since 2007, and while prices might be rising in certain areas of the economy like health care and education, nobody would argue that this has been an inflationary environment. 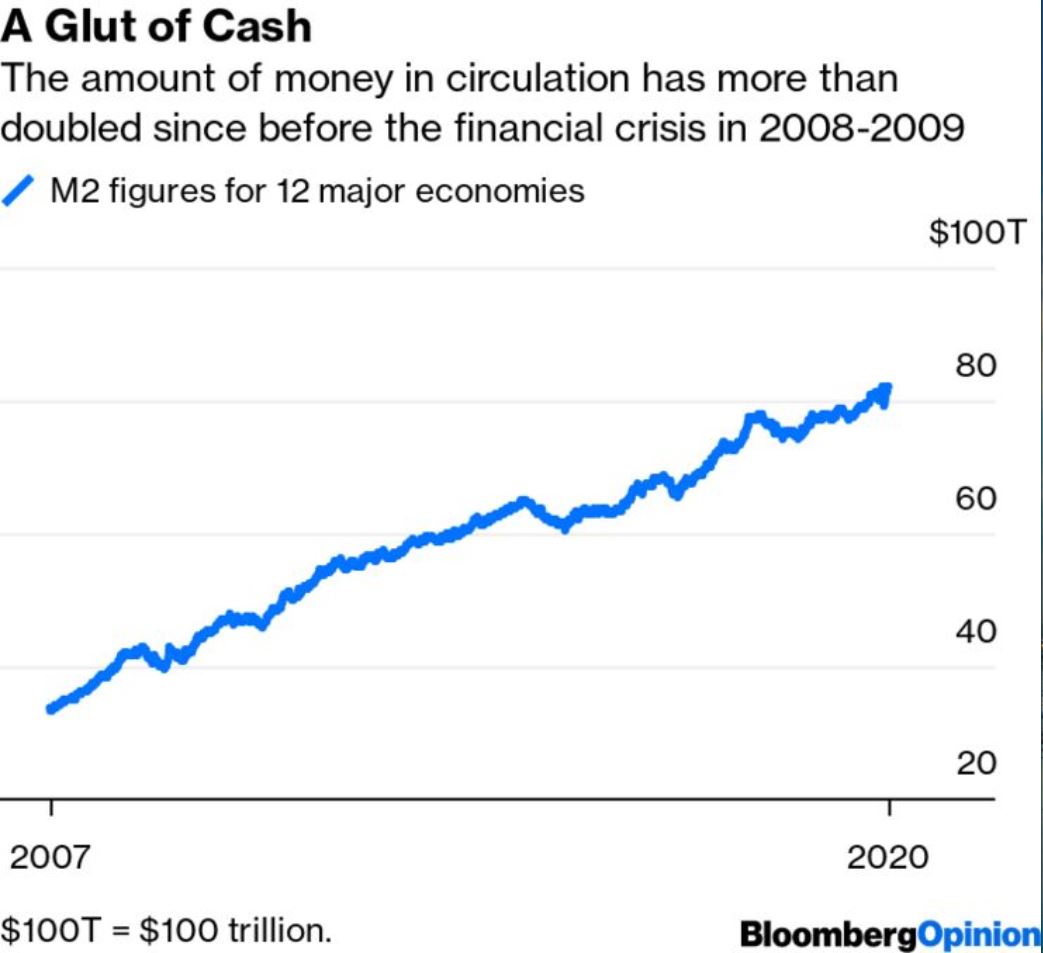 One of the most common causes of inflation, at least according to the way the world works in a text book, is too much money chasing too few goods. It’s hard to see this happening given the state of the world.

An economist recently told The New York Times, “This is the sharpest decline in consumer spending that we have ever seen.”

Unemployment in the auto industry reached 23 percent. Among steelworkers, it hit 29 percent. And the damage was enduring: a study of Pennsylvania workers who lost their jobs in the mass layoffs found that six years later they were still earning 25 percent less.

A home builders’ association in Kentucky published a wanted poster for Volcker. His crime: Murder of the American Dream.

Inflation and deflation used to be a huge problem. Rapid increases or decreases in price lead to economic instability and caused all sorts of social problems.

It’s safe to say that all economists were surprised today when Oil, which was once the biggest culprits of inflation, went negative. It’s hard to see inflation being a huge problem when one of its biggest drivers is crashing.

Economic and social instability are caused by recessions, and you can see in the chart below that when there were recessions, inflation was never too far off. 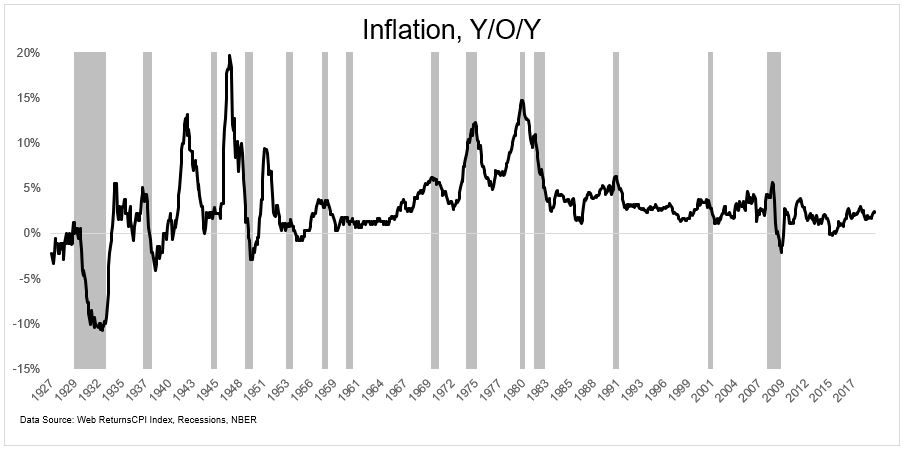 Fortunately, inflation has been falling now for the better part of the last four decades. 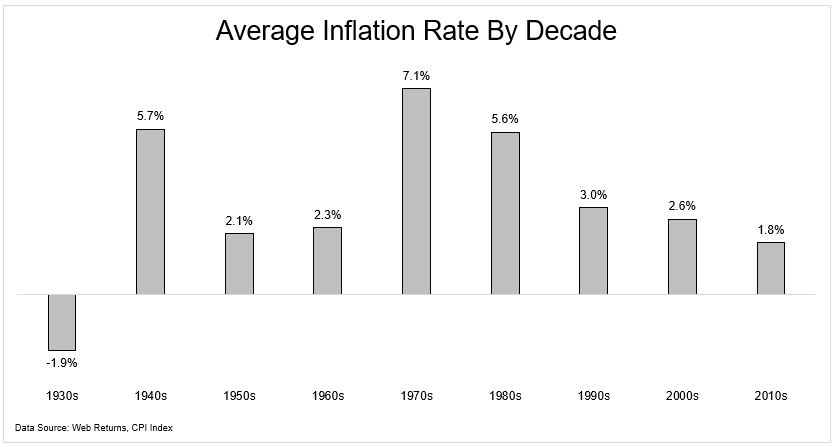 Even though it has been 40 years since we last experienced an inflationary spike, investors are right to fear this silent destroyer of wealth. The chart below the enormous differences in growth for a *60/40 portfolio, before and after inflation. 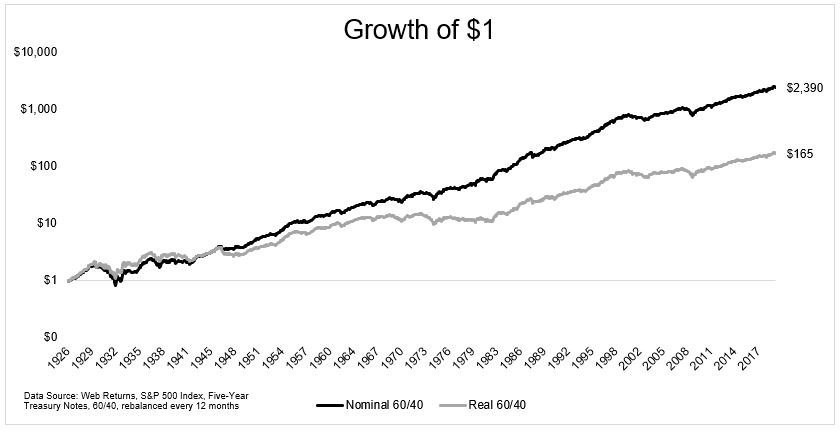 Those who invested during the 1970s describe it as the worst decade to be an investor. This chart supports their intuition. The 70s were the only decade where inflation grew at a faster pace than both stocks and bonds. 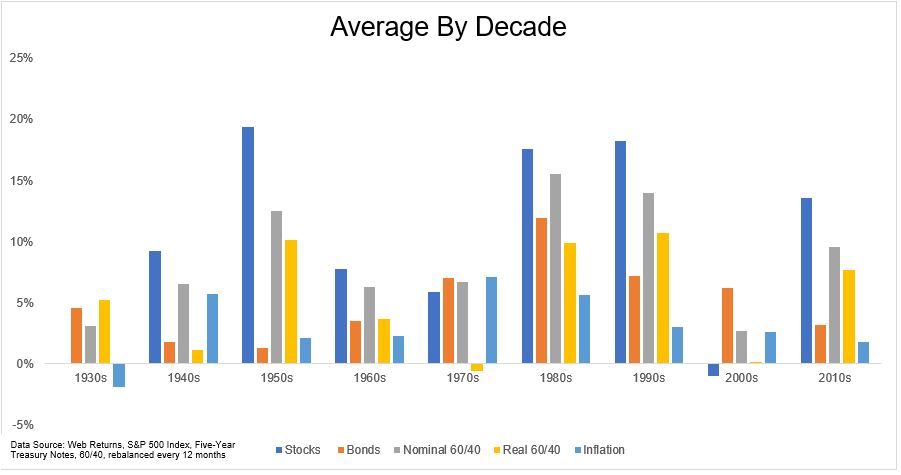 Inflation might be the least understood area in all of financial markets. We still don’t really know what drives it. I mean, we know what the books say, but it seems like figuring it out in the real world is like trying to predict out where the ball will land on a roulette wheel.

What we do know is that over time our dollars lose value, which is why risk is not a choice. Risk is forced upon us, whether we put our dollars under our mattress or in the market. Investors have to balance one risk versus another.

*For the sake of simplicity I showed how inflation affects traditional assets. If you’re really worried about it showing up again, there are other investments that you could include in a portfolio like Gold or TIPs. How these fare in an inflationary environment is a separate topic altogether. 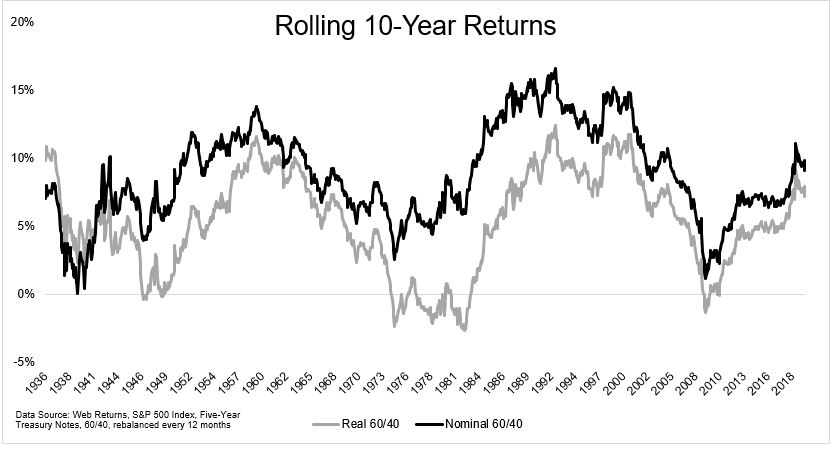