Zoom and Teladoc are both up more than 130% this year, so in this case investors should have applied third-level thinking, which says that sometimes we should stick to the first level.

Like most people, I learned about this from Howard Marks. The way that I interpret these words is that we should slow down and give system 2 a chance to counteract system 1. Of course that could be doing yourself a disservice, in the example I gave above, but more often than not people would benefit to think beyond the surface level.

For example, I’ve been doing push ups during the quarantine, so when Justin Castelli suggested I use a social app to help keep you motivated, I thought it was a no-brainer. The basic idea is you do a certain amount of push-ups, in my case 35, and check in on the app. Any day you don’t check in you have to pay a small stipend, and at the end of 14 days, whatever is in the pot gets split up among the group.

Day 1: I opened the app to check in and was surprised to find that you need to have video proof. I guess this makes sense, if the honor system worked in the real world we wouldn’t need a legal system. The problem is the video is only 60 seconds long, and I don’t know about you, but I can’t do 35 push-ups in 60 seconds.

So I started faking it.

For four straight days I did push-ups on my knees, which allowed me to do the 35 in the allotted time.* This, to be clear, was not why I joined. I wanted to do 35 push-ups every day, and now I’m cheating. I didn’t think about the unintended consequences when I signed up.* I didn’t get past the first level.

The same thing might be happening with our elected officials.

The Federal Government is sending an additional $600 a week for unemployment benefits. They landed on this number because “When you add $600 to the national average unemployment payment — $371.88 a week at the end of 2019 — the replacement rate goes from 38 percent to almost exactly 100 percent. This comes from The New York Times, which reports that unemployment benefits are higher than the average salary in more than half the states. 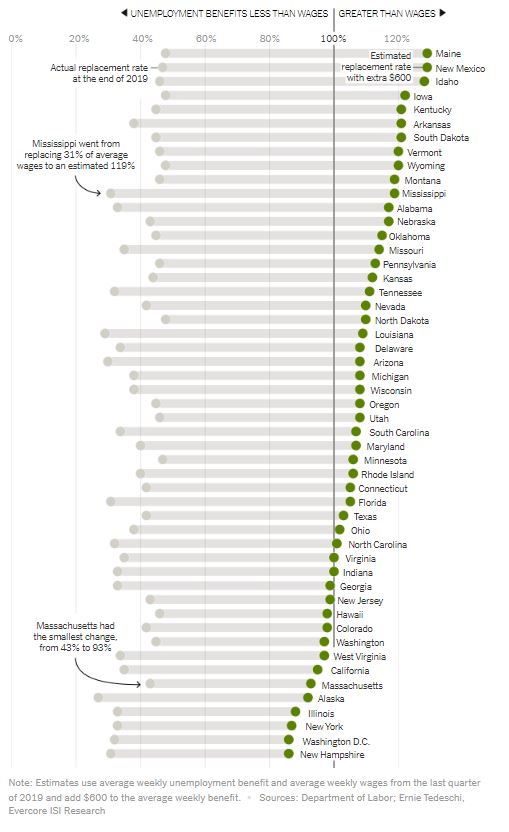 If people are driven by incentives, and we know that they are, then they will look at their unemployment checks and quickly realize that they’re better off financially at home than they are at work. To be clear, this is not permanent. The $600 from the government runs out in July, and states have a maximum amount of time that you can stay on unemployment. That being said, this likely will have some sort of impact on the job market, at least in the short run.

Unemployment benefits are typically meant to keep people afloat but stay low enough to incentivize them to find a job. Now, when seeking work may be both fruitless and dangerous, the incentives have nearly reversed.

I understand why the government did this and I agree with their decision, but there are potential unintended consequences with these types of programs that we’re unable to quantify.

The same can certainly be said for the amount of money we’re spending trying to glue the economy together. Again, I understand why we’re doing what we are and for the most part I support it, but it’s hard to imagine that we come out of all this scot-free.

Nobody has decision-making down to a science. Every choice leads us down a road with an outdated map, which is why we can only use the information we have today while being open-minded enough to alter our course tomorrow. These words are easy to write but hard to live by.

*Now I’m doing 35 legitimate ones, nobody is fact checking you.