For the first half of the 20th century, stocks offered investors higher income than government bonds. Peter Bernstein describes this in his wonderful book, Against the Gods:

In 1959, exactly thirty years after the Great Crash, an event took place that made absolutely no sense in the light of history. Up to the late 1950s, investors had received a higher income from owning stocks than from owning bonds. Every time the yields got close, the dividend yield on common stocks moved back up over the bond yield. Stock prices fell, so that a dollar invested in stocks brought more income than it had brought previously…Total dividends paid by publicly held companies were cut on nineteen occasions between 1871 and 1929; they were slashed by more than 50% from 1929 to 1933 and by about 40% in 1938.

The chart below is a visual representation of what Bernstein described. Every time the yields between stocks and bonds converged, stocks went down, their yields went up, and balance was restored to the force. That is until 1959, when the light of history shined a different light.

Bonds aren’t yielding much these days. The 10-year treasury is offering investors a juicy 60 basis points of income, or $60 for every $10,000 invested. As you can see in the chart below, nearly 80% of stocks in the S&P 500 have a higher dividend yield than the 10-year treasury rate. The idea that you can generate more income from stocks makes perfect sense to investors from the first half of the 20th century and absolutely no sense to investors from the second half of it. 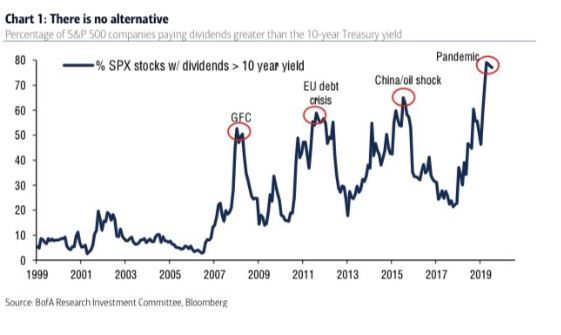 For years now, people have been saying this is a T.I.N.A. market, which stands for “there is no alternative.” If you’re an investor who is looking for income, or growth for that matter, bonds just aren’t going to get it done.

Investors can invest in the S&P 500, which is now yielding almost 2%, or they can invest in individual stocks with even higher yields. In order to eliminate accidental high yielders and look for reasonably priced companies, I ran a simple screen for stocks yielding between 2 and 6 percent that are trading between 10 and 20 times earnings. In this group you’ll find blue chip names like Intel and General Mills and JP Morgan (absolutely positively not investment advice). Where would you rather put your money? 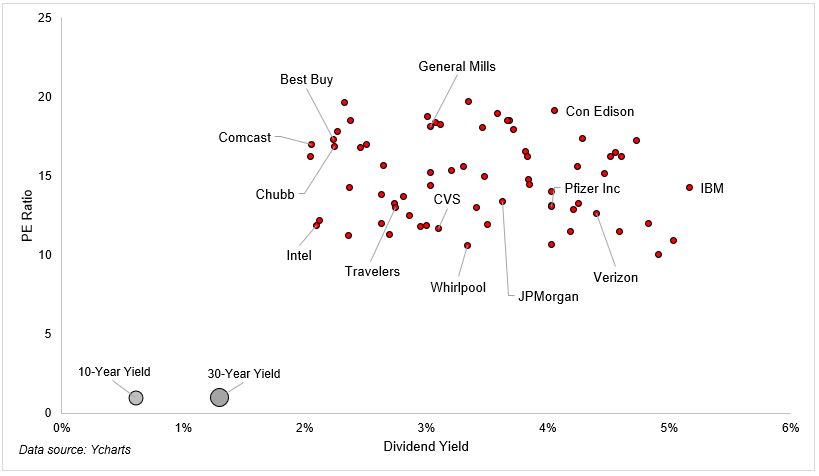 1- There is more to investing in stocks and bonds than looking at their current income and comparing them with one another.

2- People look at stocks and bonds and compare their future prospects versus one another, not limited to but including current income.

I still think bonds can serve a purpose, even with paltry rates, but there is no alternative. I can hear the bears, and now show Japan-ers cackling, so listen to me very closely. I am not suggesting that one needs to have 100% of their money invested in the stock market, but understand that the days of the 60/40 portfolio giving investors stock-like returns are over.

Nothing in investing is set in stone, so investors need to be ready for a future that doesn’t resemble the past.