Yesterday, the S&P 500 made a new all-time high. However, of the 500 members in the index, just 6% were concurrently making 52-week highs. 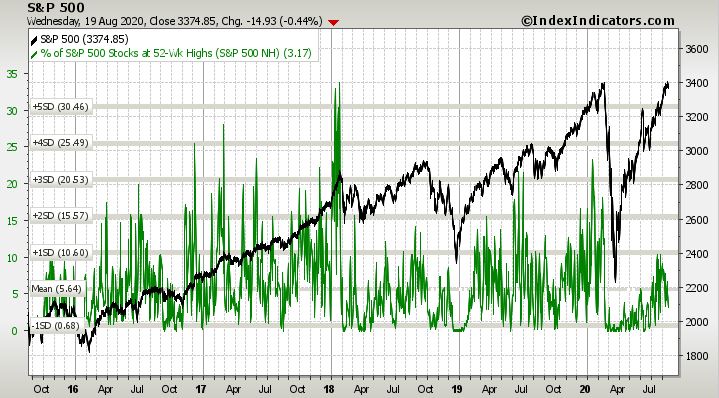 This is a remarkable data point, but it doesn’t necessarily tell the whole story. What if the other 94% were just 2% from a 52-week high? They’re not, but if they were, this data point would obscure that fact.

This data point also doesn’t reveal that the median stock is 63% above its 52 week low. Most stocks might not be near a 52-week high, but they’re also very from their 52-week lows.

So how exactly are stocks doing? On an absolute basis, the median S&P 500 stock is down 3.1% year-to-date, while 56% of them are above their 200-day moving average. Hardly terrible, but not great either.

On a relative basis, it’s pretty gnarly out there. 64% of the S&P 500 is under performing the index in 2020. The median level of underperformance -22%. The 64% is actually in line with historical numbers, but the magnitude (-22%) sounds high. I don’t have that data, but would love to see it if anybody does.

The only thing you really need to know to determine how a stock has performed in 2020 is by looking at its market cap. Granted, there might be a little double counting going on because I’m measuring from today, not from Jan 1, but I’m nearly certain that the numbers wouldn’t change much at all.

It’s normal to worry about the market when fewer and fewer stocks are leading the charge, but this is not a new worry, we’ve been talking about this for years.

I know this is the type of thing that doesn’t matter until it matters, but we should also consider an alternate outcome. What if a handful of the other 94% of stocks catch up? I’m not predicting that, but it’s an outcome that we have to at least be open minded to.