2020 is unlike anything we’ve ever experienced. This year has included some versions of the following:

Let’s take these one by one

The income inequality of The Gilded Age

The Panic of 1893, the worst crisis to date in American history, did a number on our economy. But just a few short years later, the rich had fully recovered while the rest of the country was still healing. In 1897, the richest 4,000 families in the U.S. (representing less than 1% of the population) had about as much wealth as the rest of the country combined.

I never thought about why it was called “The Gilded Age” until this I read this article in Time, which perfectly explains its meaning:

The ball held in New York City in 1897 exemplified both sides of the period in which it was held. The very wealthy flaunted their newly extravagant lifestyles, viewing their riches — a result of that century’s great social and technological changes — as proof that the U.S. was on the right track. Meanwhile, others in the city struggled to get by.

That’s why that term for that late-19th-century period in American history — the Gilded Age — is so apt. As historian Nell Irvin Painter explains, “‘Gilded’ is not golden. ‘Gilded’ has the sense of a patina covering something else. It’s the shiny exterior and the rot underneath.”

Wealth inequality has been an issue for a long time now, as you can see in this chart from J.P. Morgan. COVID-19 is the boulder that broke the camel’s back. 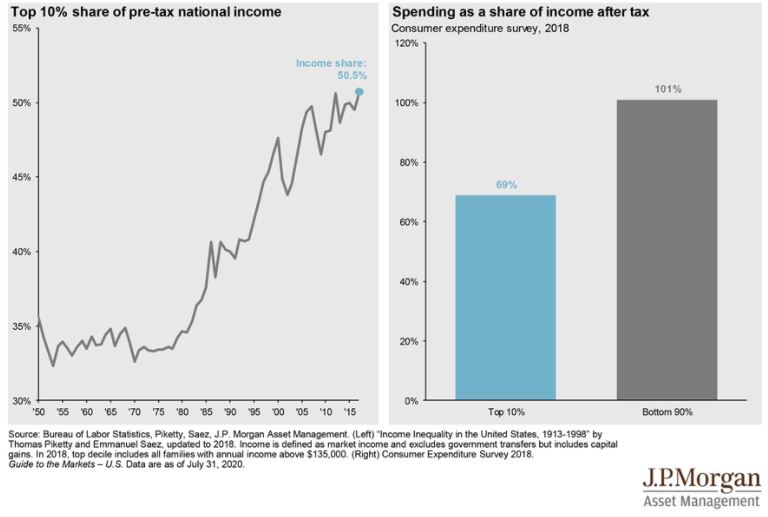 The soaring stock market coupled with the soaring unemployment has pushed income and wealth inequality to extraordinary levels. The United States has 13 million fewer jobs than it did in February. Meanwhile, last week Jeff Bezos’s net worth eclipsed $200 billion. For some context, not that this needs any, only 28 companies in the S&P 500 are worth more.

The inequities of the Gilded Age led to one of the more contentious elections in U.S. history. William Jennings Bryan, the populist, versus William McKinley, the Republican.

The way it played out was described by Ohio State’s History Teaching Institute:

Bryan’s campaign was conceived by opponents as being sectional and regional, pitting the rural, the poor, and the immigrant against the urban, native, and the middle-class/rich. In this cartoon, the ghost of Abraham Lincoln stops Bryan while on the “Road to national Destruction.” 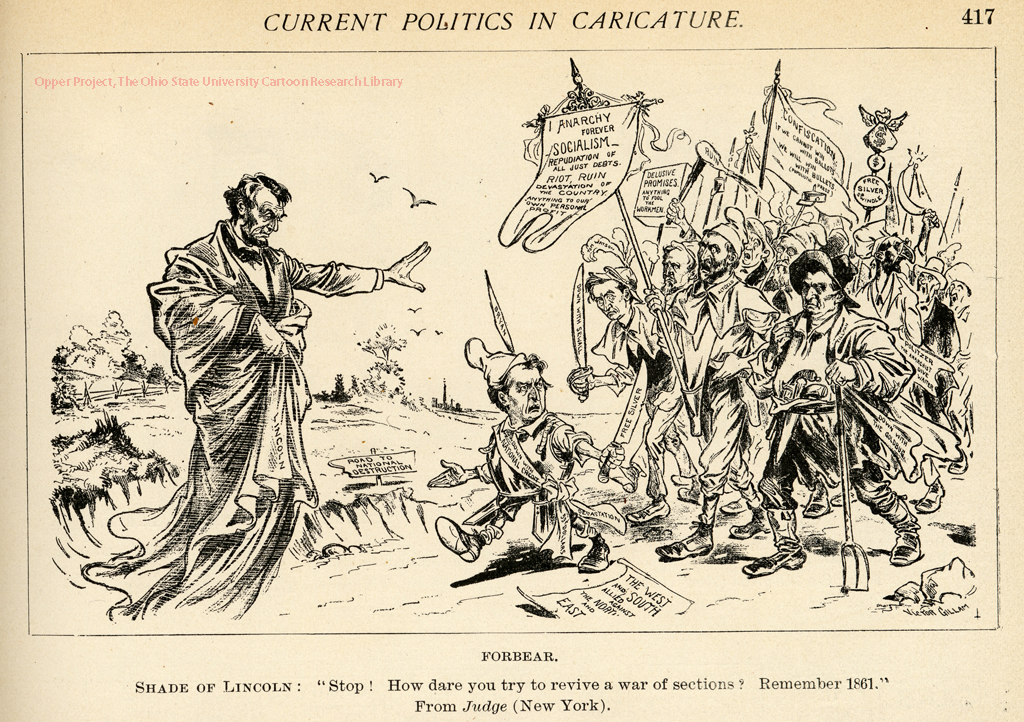 Politics are always divisive, but this election has cranked up the “us versus them” to disturbing levels, with each side afraid of what the other might do.

COVID-19 is the worst pandemic that any of us have ever seen. Not since 1918 has the planet experienced something like it.

A century ago, the influenza infected 500 million people and killed 50 million, with an estimated 675,000 occurring in the United States alone.

While it looks like the absolute and relative number of deaths will be much lower this time, thank goodness, certain hot spots like New York City was not unlike the outbreak in 1918.

A recent research report concludes that “The mortality associated with COVID-19 during the early phase of the New York City outbreak was comparable to the peak mortality observed during the 1918 H1N1 influenza pandemic.”

30,000 Americans died in August from the virus. Our existence will be forever altered by this horrible outbreak. Its end can’t come soon enough.

The Great Depression is the worst economic contraction in our nation’s history. Some statistics to hammer this home:

The difference between then and now is that our economy didn’t just crash, for certain areas, it was completely turned off. This chart shows that people didn’t go out to eat and barely went anywhere at all. 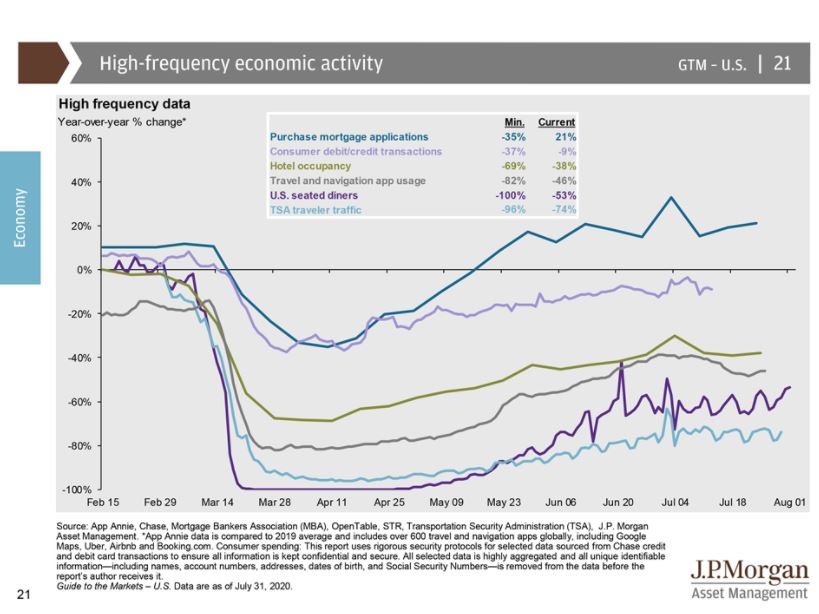 The social movements of the 1960s

It’s sad that black people are fighting the same fight that they have been for decades. Centuries, really.

Athletes with a voice and a platform have taken up the cause. Last week, players in the NBA decided to boycott games, hoping to use their power to drive actual change. This isn’t the first time NBA players decided to take action for a cause they believed in. At the All-Star game in 1964, just before tip off, they threatened to strike unless some concessions were made

Major concessions were made across the board. The first-ever pension plan for NBA players was created. Every team was required to hire an athletic trainer. Sunday afternoon games could no longer be scheduled directly after Saturday night matchups..The NBPA was the first union to be recognized in major American sports. Baseball (1966) and football (1968) soon followed suit.

And it wouldn’t have happened if players hadn’t been willing to risk their own livelihoods for change that they believe in. It is a message that modern players seem to have internalized, even under different circumstances.

I’m proud of what the players did. In a dark year, they were a ray of light.

Markets are like snowflakes, no two are exactly alike. While we didn’t have a one-day decline of 20%, we did get a few that were over 10%. In just 22 days, the market fell 30%, the fastest speed at which something like this has ever occurred… 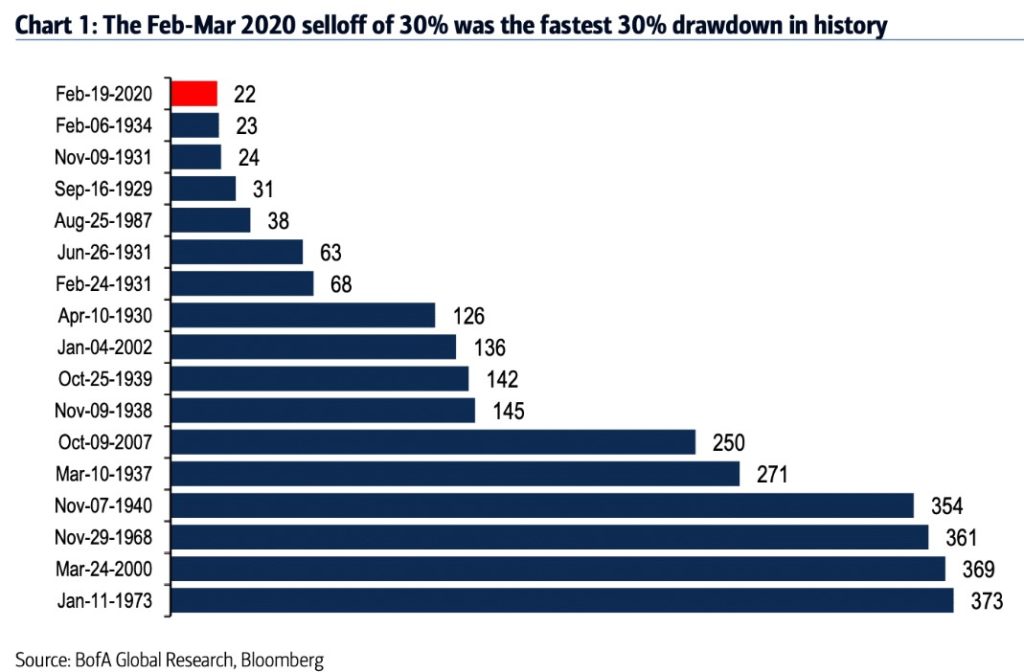 …And who could have foreseen what would happen next? A cocktail of the quarantine, free commissions, and stocks going vertical has led to an explosion of retail trading like we haven’t seen since 1999.

The Wall Street Journal shared a chart showing that individual investors have consistently been responsible for ~15% of stock trading. That number has jumped to an estimated 20% this year. 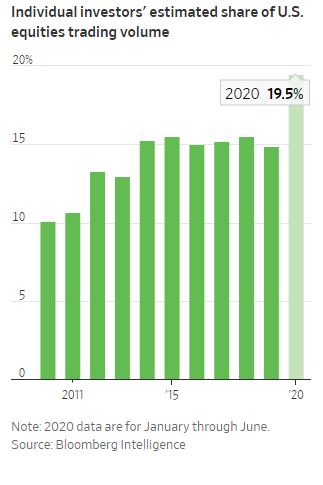 “Mr. Hughes, the New Jersey real estate agent, said he had multiple clients who each lost bids on about half-dozen homes, including a two-bedroom house in East Orange that received 25 offers. It sold for $345,000 — 21 percent over the asking price.”

This comes from a New York Times article, “New Yorkers Are Fleeing to the Suburbs: ‘The Demand Is Insane’”

This is as much a demographics story as anything else, but the idea that home prices and home sales would be surging is not something anyone could have predicted in March. 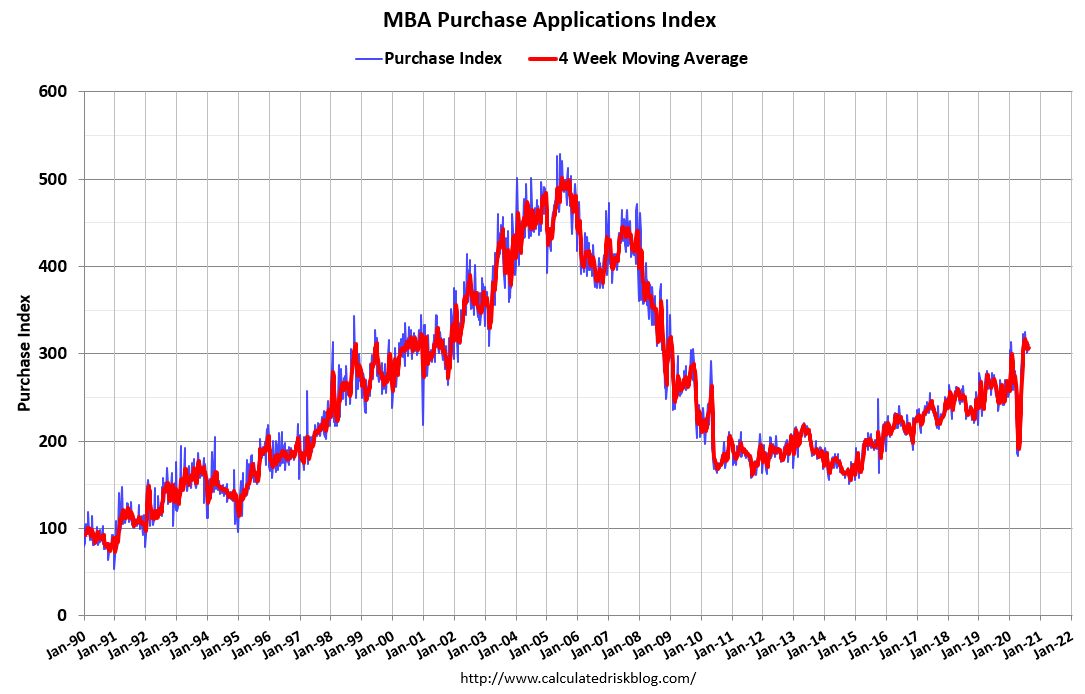 This year is a string of contradictions; There are people living their best life while others have never had it worse. People are buying houses while others can’t afford rent. Stocks are booming while many parts of the economy are still contracting.

When we look back on 2020 we’ll remember the virus and how it changed our lives. But as we’re living through it, we should acknowledge that there is much more to the story, and everyone has their own version of it.

We’re good at weaving together a narrative using disparate pieces of information, but 2020 defies cohesion. It takes some serious mental gymnastics to put all these pieces together. I’m not sure we ever will.