If we learned anything from the 2016 election, it’s to watch what people do, not what they say.

You can’t trust polls that ask people what they’re going to do for a million and one reasons, but when it comes to asking people what they’ve already done, I think you can get a little closer to the truth. So, when 63% of investors tell UBS that they tweaked their holdings in some way before the election, I *mostly believe it. 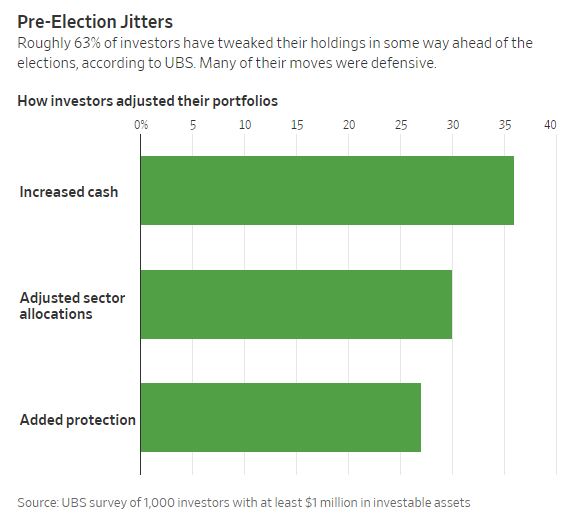 Look, I get it. The number of Covid cases is accelerating, millions are unemployed, we’re still waiting on another round of fiscal stimulus, and on top of all of this we’re staring at the possibility of a contested election.

With the stock market up 50% from the bottom in March and 3% on the year, it feels like investors dodged a bullet. Which is why I understand the desire to raise a little cash, which 35% of investors did, or to buy some protection, which 27% of investors did, according to this poll. I don’t think this is the worst idea in the world. If the decision is to raise a little cash or go to all cash, then by all means, do what you gotta do.

Let’s rewind four years. On election night in 2016, futures took a dive as the numbers came in favoring Trump.

So how much did stocks actually fall the next day? They didn’t, the Dow gained 256 points the day after the election.

It’s certainly possible that protection buyers will get paid this time around. It’s also possible that we could see a massive rally as all of these hedges come off and all of the pressure gets released. That is of course assuming that we actually know the outcome of the election, which is maybe just wishful thinking on my part.

This is an emotional time for our country, and for investors, so I understand why people are tinkering with their portfolios ahead of the election. While most investors would be better off following Jack Bogle’s advice of “don’t just do something, stand there,” there are worse things an investor can do than buying some protection or raising a little cash. It’s the big mistakes we have to avoid, and if this allows you to get through to the other side, then no harm no foul.

*Could just be confirming my priors