Everything has its limits. Laws are no exception.

Matthew Klein wrote about the end of Moore’s law and the effect it’s having on the economy in Barron’s this weekend.

During the tech boom in the second half of the 1990s, the U.S. economy grew about 4.3% each year. According to a new study from economists at the Bureau of Economic Analysis and the Bureau of Labor Statistics, more than 1.4 percentage points of that growth came from efficiency improvements in the manufacturing of computers and related equipment, from investments in new computer hardware by other businesses, and, to a lesser extent, from purchases of computer software. More than a third of the growth of the U.S. economy during that period came from the tech sector.

From 2007 to 2016, by contrast, the U.S. economy grew just 1.2% each year—3.1 percentage points slower. About one percentage point of the difference can be blamed on the weak job market following the financial crisis. But another full percentage point of the growth shortfall can largely be explained by the sharp decline in new investment in IT hardware and the severe slowdown in the underlying rate of innovation at America’s tech manufacturers.

This is one of the Moore interesting charts I’ve seen in a long time. *jumps down elevator shaft* 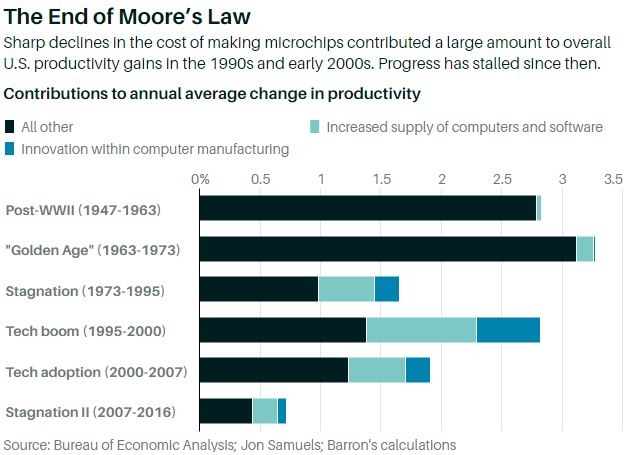 If you’re interested in learning more about semi-conductors, I just saw someone share this podcast with Brandon Beylo and @FoolAlltheTime. I haven’t listened to it yet, but plan on getting to it later.

Have a happy Sunday.

Moore’s Law Is Ending. Here’s What That Means for Investors and the Economy.