People aren’t very good at timing the stock market. This is especially true on the way out. Believe me, I know from experience.

When I was actively trading individual stocks, my purchases were actually pretty well-timed, generally speaking. I favored buying stocks as they were breaking out. My problem was, I sold them when they started to retrace, effectively exiting where I entered.

People spend a lot of time talking about what stocks to buy and when to buy them, but they often overlook the second part of the transaction, which matters at least as much as the first part.

Selling is more difficult than buying for a few reasons. You’re thinking clearly before you buy something. Once you pull the trigger, it’s yours. It’s not longer Amazon. It’s my Amazon. You’re now anchored to your purchase price, and your profit or loss influences your decisions.

There are two broad ways to think about selling a position. One attempts to maximize return, the other attempts to minimize risk. Neither is right or wrong, neither promises failure or success.

If you’re trying to maximize return, then you have to be willing to swallow decent losses. Sorry, but this is the way. The reality is that all of the winning stocks get crushed from time to time. If you want all the upside, you need to take all of the downside. Of course, the challenge with this is you don’t know if you’re holding a giant future winner or a stock that’s going much lower. That’s a different conversation entirely.

Tesla had its deepest drawdown ever this year, falling 60% from peak-to-trough. Incredibly, it’s also up 640% this year. If you were using any risk management strategy, you would have been stopped out. I know this is an extreme example, but it’s a good one. 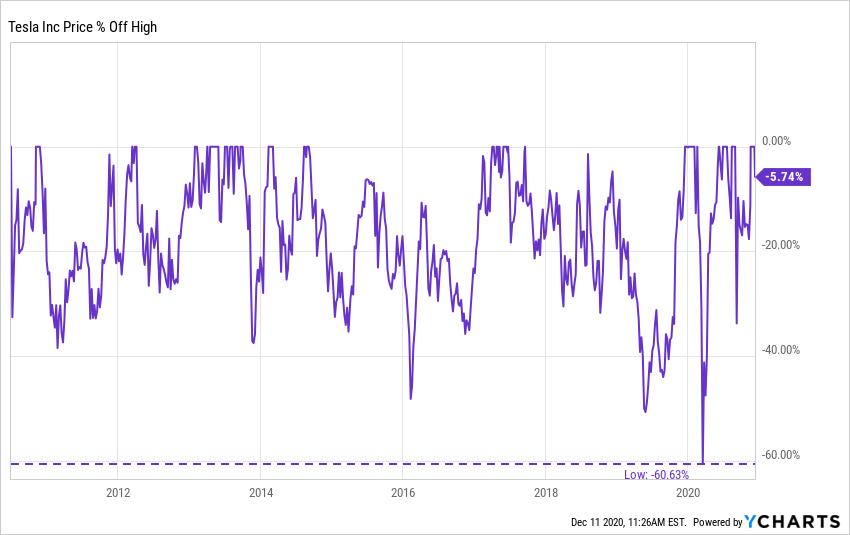 This post was inspired by an article in Barron’s that looked at a study that showed that “selling decisions underperform substantially—even relative to random selling strategies.”

Ben and I got into this and much more on this week’s Animal Spirits.