Michael Cembalest and his team at J.P. Morgan Asset & Wealth Management just put out their 2021 outlook. They do incredible work, and I wanted to share some of the most important charts from their piece, which I cannot recommend highly enough.

Eye on the Market Outlook 2021: The Hazmat Recovery

If someone told you that a global pandemic would come out of nowhere and grind the economy to a halt, you would have been incredibly bearish on the stock market. But Covid-19 was such a wrecking ball that we quickly found ourselves in an upside-down market. In this scenario, to quote Jesse Livermore, “News, good or bad, triggers a countervailing policy response with effects that outweigh the original implications of the news itself.”

This next chart should get more attention than it does. I’m not sure I’ve ever seen it before. The tax burden on large-cap stocks has been falling for a long time, lining shareholder’s pockets. If Biden has it his way, corporations will pay more taxes than they have in the recent past. Cembalest notes, “In aggregate, Biden’s corporate tax plans would raise $2.2 trillion compared to corporate tax cuts of $740 billion provided by Trump’s 2017 bill. In terms of its impact on profits, Biden’s plan could reduce S&P 500 EPS by ~10%, but that’s before incorporating any growth benefits from increased government spending (i.e., multiplier effects).” 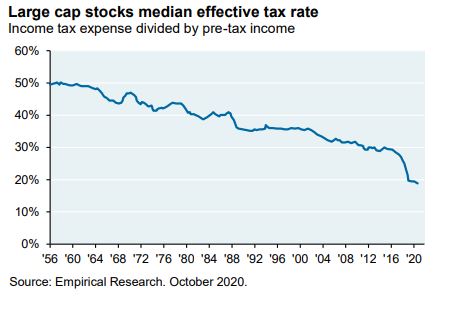 As everybody knows by now, the stock market is expensive by traditional valuation metrics. On a few of them, like market cap/GDP, and enterprise value/EBITDA, the market has never been more expensive than it is today. Of course, there are important distinctions between today and the 1960s, making a comparison all but irrelevant. Cembalest writes:

It’s worth noting that 90% of S&P 500 market cap is now based on intangible assets (R&D, intellectual property, software, etc), complicating historical comparisons. P/E ratios of the asset-heavy US corporate sector of the 1960s-1980s might not be the best comparison for today’s asset-light, less capital-intensive S&P 500 universe. Intangible asset shares were 20% in 1975, 30% in 1985 and 80% by 2005. So, some upward drift in S&P 500 P/E ratios over time makes sense, in principle.

There are certain things about today’s market that are reminiscent of 1999, but these two charts show some of the key differences. 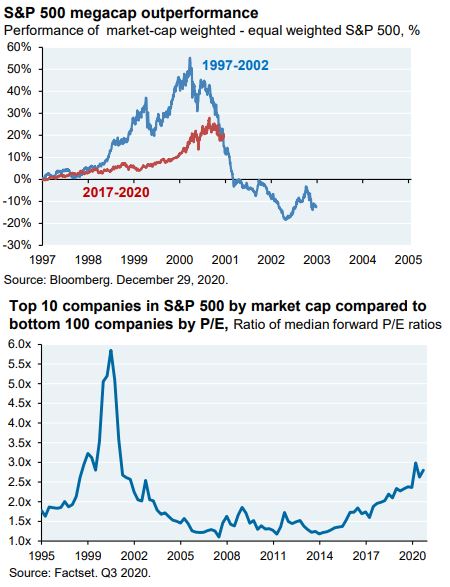 The late 90s were a large-cap bubble as much as it was a TMT one. Corry Wang, in a fantastic thread, showed that Coca-Cola traded at 43x earnings, J&J 41x, and Walmart 46x! The chart above, which shows the difference in P/Es of the top 10 to the bottom 100, is something we might never see again. 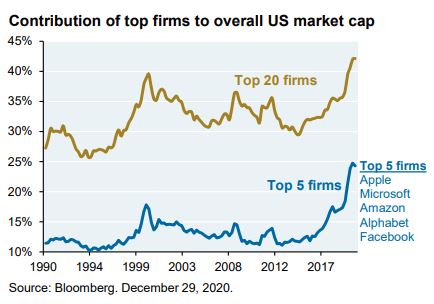 Cembalest and team showed the revenue of the 15 largest companies as a percent of GDP. We’re entering uncharted territory here. I don’t know what can slow this down other than government intervention. People talk about this being a potential risk, but it could take years for anything to happen, and who says this wouldn’t be good for shareholders? Imagine investor demand for Instagram, YouTube, or AWS? 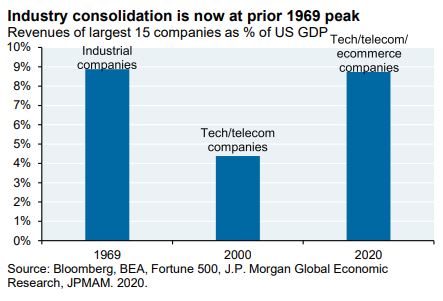 The whole post is well worth taking the time to read. Hit the link below.

Eye on the Market Outlook 2021: The Hazmat Recovery