2020 was the wildest year in the stock market that any of us have ever seen.

We had two of the five worst days ever, the fastest bear market ever, and the fastest recovery ever. 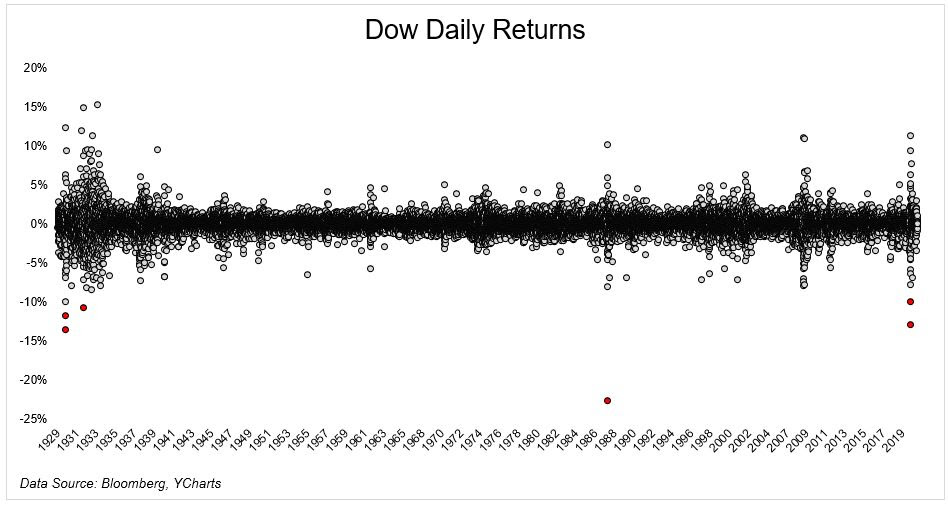 Today I want to look forward and talk about some of the things I’m thinking about for 2021.

Will the NASDAQ ever fall? 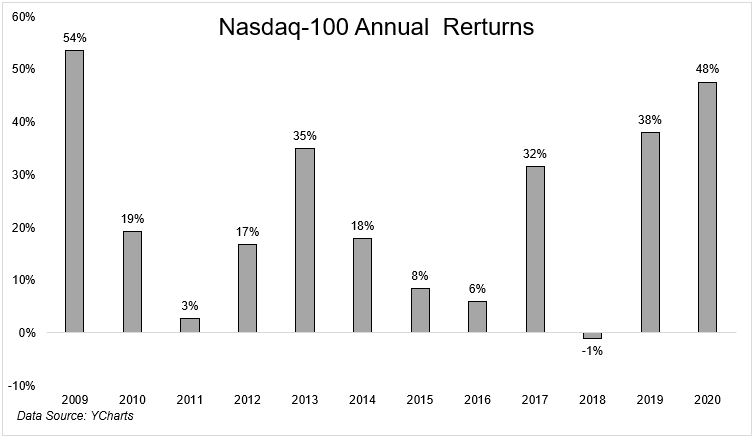 Speaking of the big five, these stocks represent a quarter of the S&P 500, which is the largest weighting for five stocks since the early 1970s. It’s hard seeing this continue, but it’s harder to come up with a reason why it won’t. 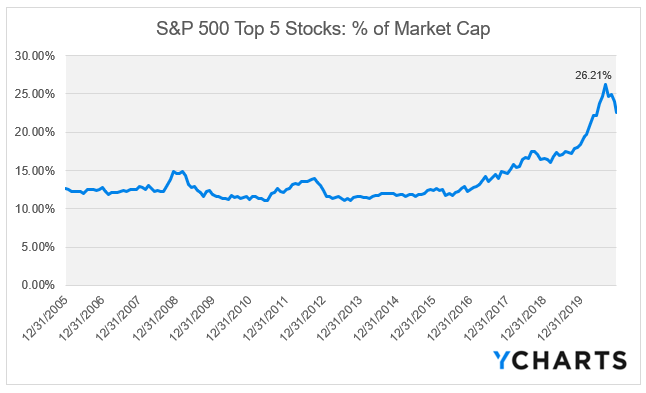 Will value come back?

Over the last 5 years, the Russell 1000 Value Index has grown at 9% a year. Not bad, not bad at all. But when you compare it to its growth counterpart, which has grown at 21% a year, it looks downright dreadful.

Maybe we should be talking less about value being dead and more about growth being impossible to keep up with.

One of the reasons for the discrepancy in returns has to do with the difference in sector weights. Value has 29% fewer technology stocks and 26% more financials, industrials, and energy. The spread between value and growth on fundamental factors is as wide as it’s been since 1999, and on some metrics, it’s even wider. But is it actually different this time? You can’t rule it out. 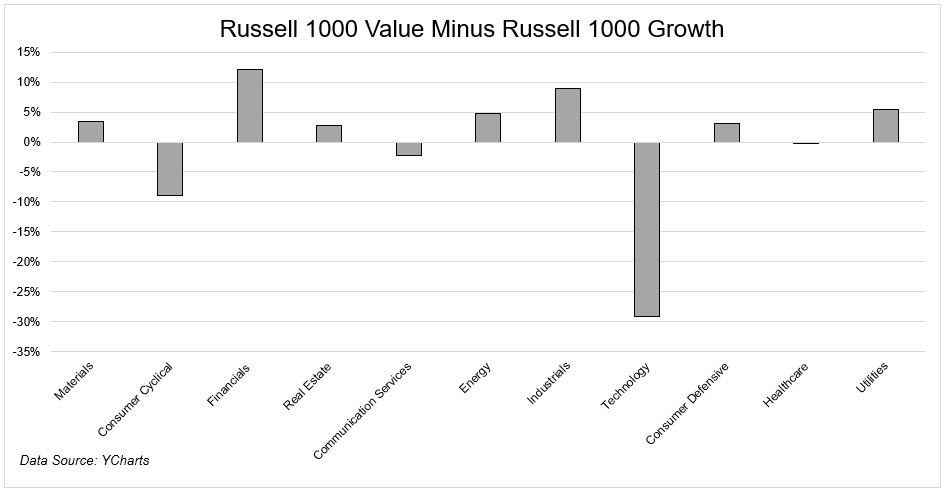 Will the stocks that benefited the most from Covid continue to outperform?

The world looks different today than it did a year ago. People are working from home, and they’re wearing masks in the street. Some parts of our lives and some parts of the economy are changed forever. The question is, has the market already discounted all of the change and then some?

Again, the Covid beneficiaries added twice as much in market cap this year as the combined value of the badly hurt names by the virus. Did the market get this right? Does the gap narrow next year? Does it continue to widen?

Investors went a little crazy this year. And I don’t mean in the way that Zoom gained $100 billion in market cap. That might be justified. What investors did after Apple and Tesla announced that they were splitting their stocks was absolutely bonkers.

That was its second-best performing day of the last decade. $172 billion in additional market cap was added one day because investors were getting four shares for every 1 they had previously, with the price of their shares getting cut by 75%. In theory, this shouldn’t impact the value of a company. In reality, L O L.

Will investors continue to ignore things like, I don’t know, common sense? Investor behavior is impossible to predict, but I’m really looking forward to seeing whether or not 2021 is a continuation of what feels like a lot of shenanigans.

The 10-year treasury rate began the year under 2%. Investors in the traditional 60/40 portfolio didn’t expect too much from this side of their ledger. They got it anyway. Bonds are up more than 7% this year.

The stock market started the year with a CAPE ratio north of 30, was coming off a 32% year, and had seen increases in 9 of the last 10 years. Investors couldn’t have expected too much from this side of their ledger this year. They got it anyway. The S&P 500 is up 16%. 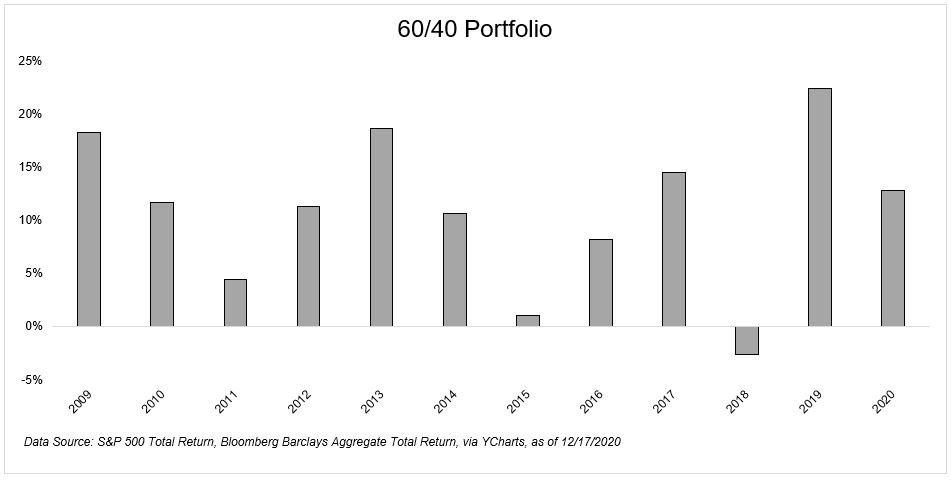 Where does the Dollar Go?

Maybe all that money printing is finally catching up with us. For the first time in a long time, the mighty dollar is starting to show signs of weakness. This has implications for the global economy and implications for U.S. investors.

A weaker dollar is good for gold and good for non-hedged foreign stocks. Gold quietly made an all-time high earlier in the year, and international stocks are showing signs of life, after doing a whole lot of nothing over the last decade.

International developed stocks (EFA), think Japan, United Kingdom, have only outperformed U.S. stocks once in the last 8 years. This is another one of those things that shouldn’t continue forever, but it’s hard to make the case why it wouldn’t.

Will we see more institutional adoption of Bitcoin?

Speaking of dollars, it’s been a heck of a year for Bitcoin. Until recently, Grayscale’s Bitcoin was the only way for U.S. investors to access bitcoin in a listed fund.

Because it was alone in the universe, it has often commanded a hefty premium to the value of its underlying holdings. At Grayscale, business is a-boomin’. Michael Sonnenshein said today that flows are up 6x what they were last year. 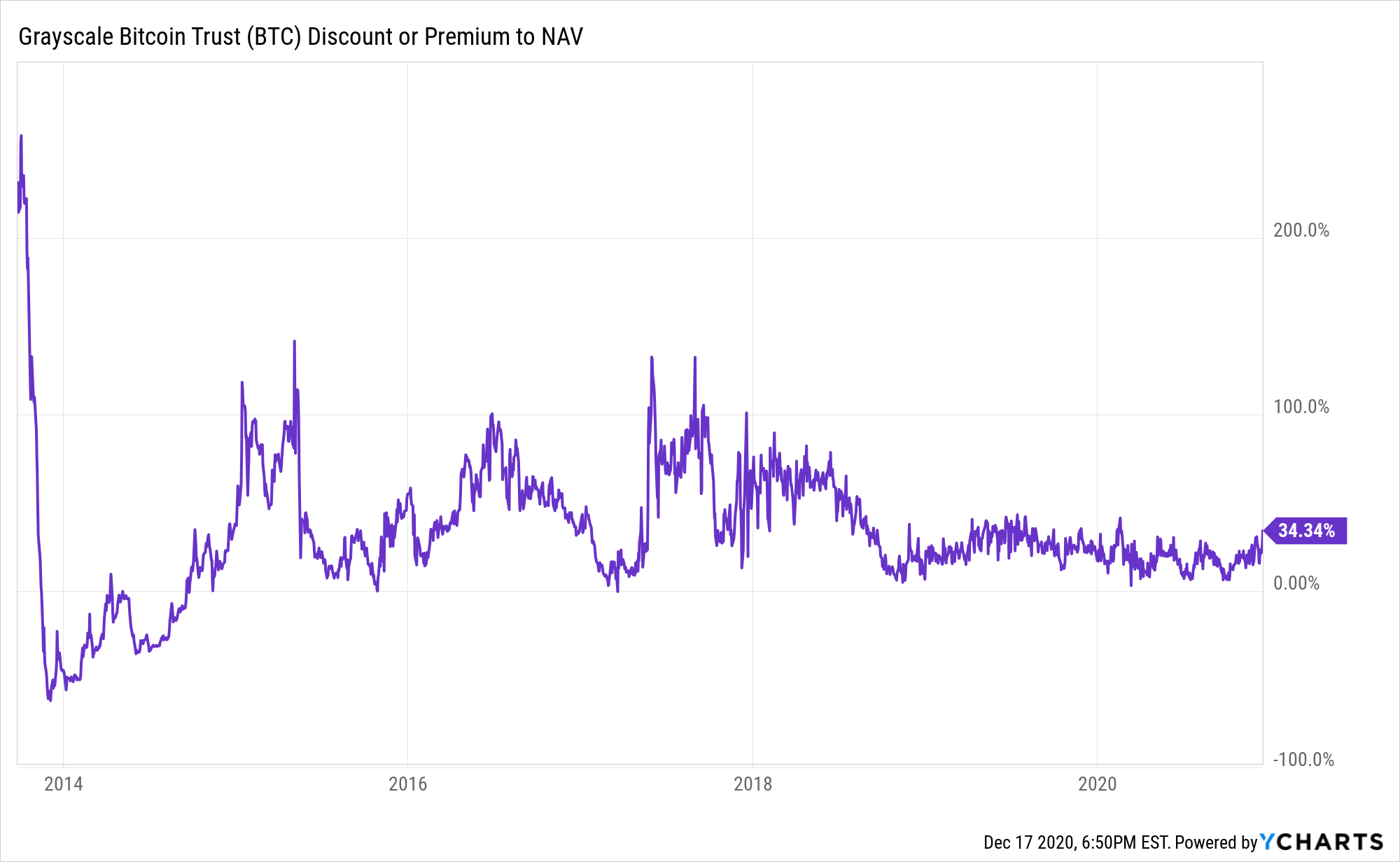 A competitor recently came onto the playing field. Bitwise is an index fund of cryptocurrencies. This launched less than a month ago, and investors are going absolutely nuts for it, paying 369% more for the fund than the value of its underlying holdings. It already has $189 million in assets.

Until now, Bitcoin has been mostly a fringe asset and hasn’t had a place in the portfolio of 99% of investors. What happens if institutional investors start to get involved?

You would think that the rising price will attract more demand, which should lead to higher prices.

Will the yield curve continue to steepen?

The yield curve, historically one of the most predictive economic indicators, went negative in 2019. That got a ton of attention at the time. Once again, it preceded a recession, albeit one that had nothing to do with the underlying economy. Be that as it may, right now it’s at a 3-year high and I see few people talking about it.

A steeper yield curve, again, in theory, is good for economic growth and rising inflation expectations. With the Fed committed to keeping short-term rates low for the next few years, this may continue to widen, and maybe longer-term bonds start to outpace inflation.

What’s next in the democratization of finance?

Investors are earning nothing on their cash. This has led to an explosion of alternative assets as money looks for something above and beyond the zero risk-free rate. People are turning to baseball cards, artwork, income share agreements, private companies, real estate, and farmland, to name a few.

It’s hard to imagine these places garnering this much interest if money could earn something in a bank account.

I’m curious to see what comes next.

For a preview, read this excellent piece from John Street Capital

Before this year, I had never heard of a SPAC. Now they’re ubiquitous. 200 SPACs raised $64 billion this year. And they’re just getting started.

According to Goldman Sachs, $61 billion in SPAC IPO proceeds are currently searching for acquisition targets.

I cannot wait to see this. There are going to be some spectacularly bad deals come through.

It’s always hard to see things changing. And then along comes a year like 2020. Nobody had any of this on their list at the end of 2019.

2021 is sure to deliver some surprises, and unlike the last dreadful year, hopefully, they’re for the better.