“The top 20 ETFs to debut in 2020 by total fund assets include only three products from BlackRock Inc. and none from Vanguard Group or State Street Corp., according to data compiled by Bloomberg.”

There are four main themes that I’m most interested in for the ETF marketplace. The first one, tied to the quote above, is maturation. While active equity funds continue to hemorrhage money, flows into passive have plateaued over the last few years. 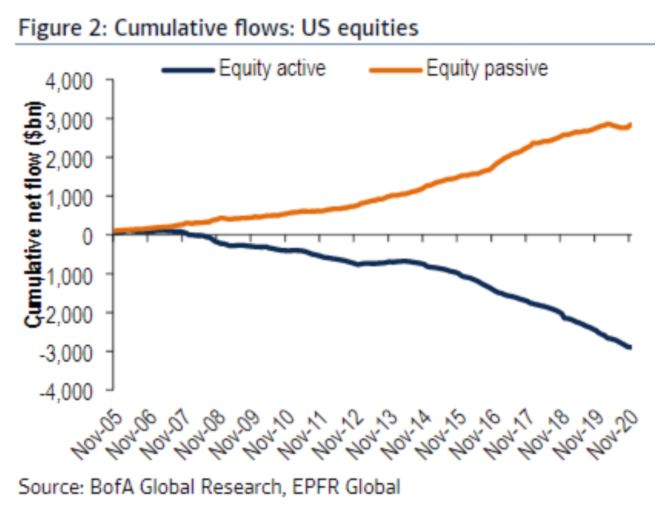 At some point, this had to slow down. The big three, iShares, Vanguard, and State Street, control nearly 80% of the pie. Slowing down may be a bit misleading because money is still coming in, only at 110mph instead of the 120mph that we’ve been accustomed to. Vanguard ETFs had $201 of inflows in 2020, while BlackRock added $116 billion. Those are huge numbers, but BlackRock’s growth last year trailed the overall ETF industry, according to Cinthia Murphy. 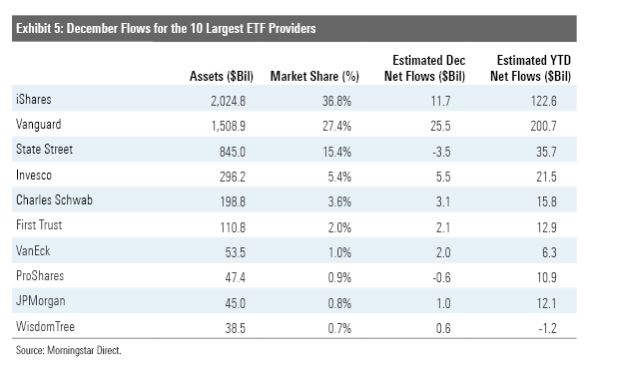 An 80% share for three issuers might sound insane, and it is until you consider that they represented 92% in early 2019.

Opposite the establishment, you have new players like Global X and Ark that exploded onto the scene. The former grew 60% to $21 billion in 2020, and the latter, well, you probably already know all about them.

Ark brought in $20.5 billion in assets in 2020, which is almost as amazing as their performance. All five of Ark’s ETFs, according to Ben Johnson, produced triple-digit returns in 2020. In December, two of their funds, ARKK and ARKG, took in more than Vanguard’s Total Bond ETF (BND) and Vanguard’s Total International Stock ETF, VXUS. Wow.

Another story that I’m watching are the asset managers with wealth management arms. Eric Balchunas described this as a “bring your own assets strategy.” JP Morgan and Goldman Sachs are players now. According to my calculations, JPM has ~$45 billion in ETF assets.  Goldman has ~$22 billion.

People are straight-up gambling. There’s no other way to describe the next table. Assets in inverse ETFs doubled this year. I don’t think this is going away. The market could double from here or get cut in half, but I think new retail is here to stay. They’re players now, representing 20% of the overall trading volume. 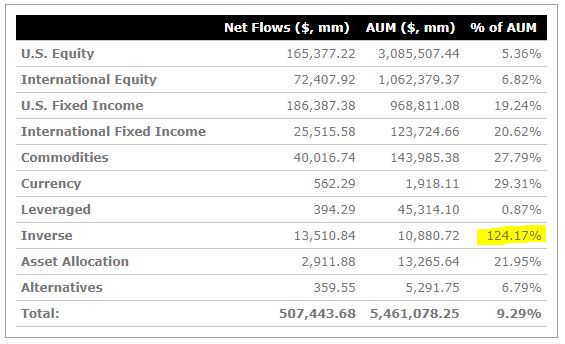 Maturation, new players, BYOA, and gamblers were the big themes in 2020. As always, I’m excited to see what happens next.