The best way to convince somebody to give you money is to tell them a compelling story. The next best way is to be right. Combine the two, and amazing things can happen. 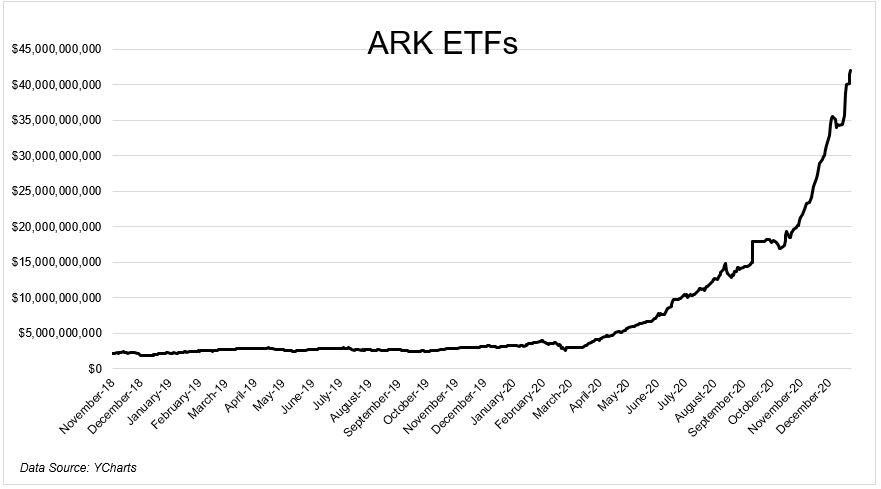 I know many readers will think, “She got lucky with Tesla.” Okay, let’s go with this argument for one moment.

Tesla’s 740% gain in 2020 was clearly a tailwind for ARKK. But it’s not just Tesla, which is a 10% position. The fund also has large holdings in the following stocks:

Check the charts. They’re all going vertical. Was this luck as well?

The Ark Innovation ETF gets all the attention, but they have four other ETFs, and they all returned more than 100% in 2020. 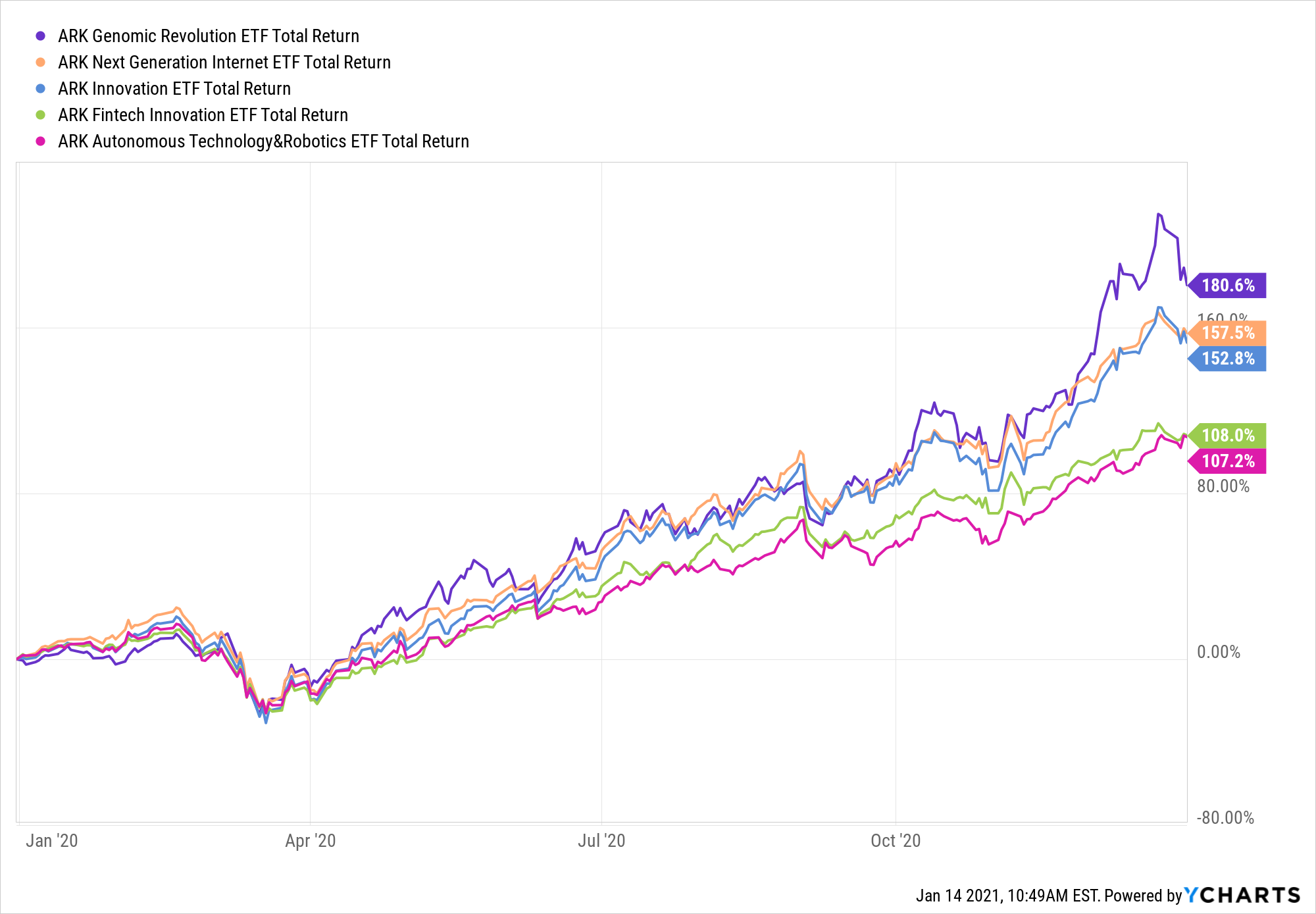 Cathie Wood isn’t the only star money manager who has ridden Tesla’s coattails to enormous gains.

Ron Baron’s Focused Growth Fund has an even bigger position in Tesla, but the performance hasn’t captured the public’s imagination the same way that Cathie Wood has. 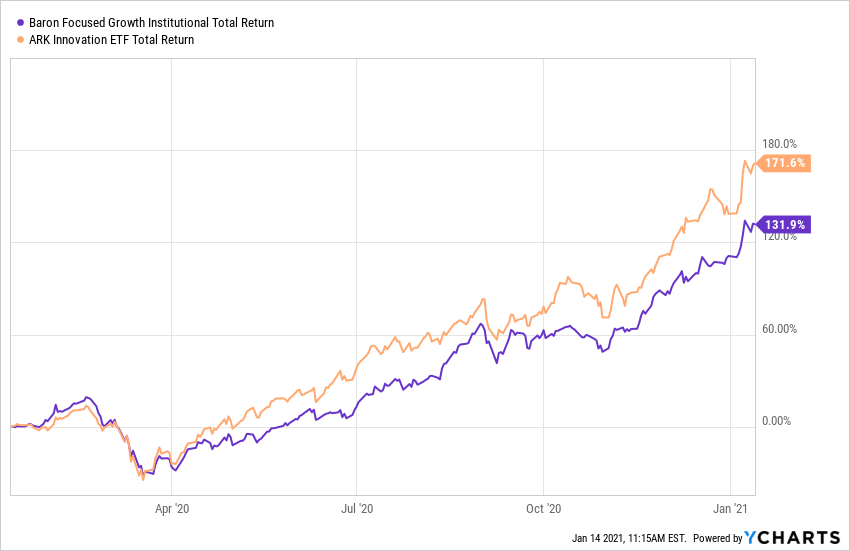 If ARKK’s success was all about Tesla, then what do we make of the following chart? ARKK has a 10% position in Tesla, while the Baron fund has a 38% position! 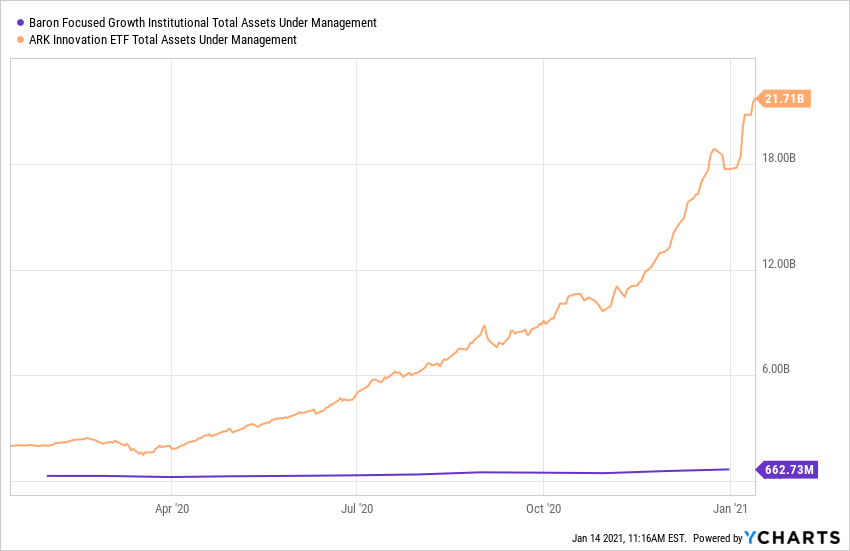 Is the outsized position in Baron’s fund part of the reason for the gap in total assets? Like, if 38% of the fund is Tesla, and that’s the reason why you’d buy it, then maybe…just buy Tesla? There might be something to this.

Is the fact that Baron holds Tesla in a mutual fund and not in an ETF part of the reason for the gap in total assets? There’s probably something to this.

Is the fact that it charges higher fees (1.1% versus 0.75%) part of the reason for the gap in total assets. Yeah, this definitely matters.

But above all else, the single biggest reason for the gap in total assets is that Cathie Wood. She has become a celebrity, at least in the world of money management, because she told a story, and she was proven right.

Ark just passed iShares for YTD flows, doing $500 million a day. Just insane. This is what happens when you can tell a story that turns out to be right.

You can have the best ideas and the best research in the world, but numbers don’t matter if you can’t make somebody believe. People aren’t motivated by data. They’re motivated by feelings.

The flip side of this is if you’re going to call your shot, you better be right. You can be the Michael Jordan of storytelling, but at some point, the fans will turn on you if you shoot enough air balls.