Big stocks get all of the attention, and for good reason.

Apple and Amazon each reported $100 billion in revenue in their most recent quarter. We haven’t seen numbers like this since Exxon and Walmart did it in the early 2000s.

The big 5 are doing $200 billion in free cash flow, vaulting their market cap past $8 trillion.

The story that’s catapulted large-cap stocks into the stratosphere is nothing short of remarkable. Truth be told, I didn’t think the giants could continue their growth trajectory given how large they were. I was wrong, clearly.

When the pandemic hit, large stocks fell less than small stocks and recovered much quicker as well. The reasons for this are well documented. We don’t have to rehash them here.

Unless you happen to manage a small-cap fund, you probably can’t name too many stocks in the Russell 2000. Because they’re not household names, and because they’ve done so poorly relative to large stocks, we don’t hear too much about them.

You probably didn’t skip a beat while reading that last paragraph, but it contains a factual error, “They’ve done so poorly relative to large stocks” just isn’t true.

You might be aware that small stocks have been on fire lately, but did you know the recent run closed the gap on 1, 3, and 5-year returns? 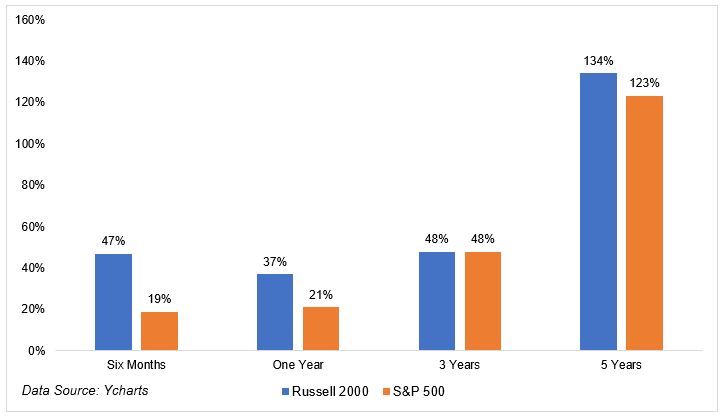 In fairness, a lot of the returns that you see in the table came in the last couple of months. If you pull up a long-term chart of the Russell 2000 and the S&P 500, it looks something like this.

I’m trying to come up with reasons as to why small caps are performing the way they are, especially relative to the narratives we’ve all been talking about over the last few years.

Things don’t always play out the way we think they should.

Two days ago, Exxon reported that it lost $22 billion in 2020, its worst performance in four decades. Most people would just expect a stock to go down on that sort of news. The opposite happened.

In the three sessions since this report, the stock gained 7.5%. How does this happen? Because it wasn’t news to the market. Everyone knows 2020 was a bad year. Exxon fell 36% last year, its worst annual decline since at least 1972 (that’s as far back as my data set goes).

Given that things are still really poor for a lot of small business, what are we to make of the massive gains over the last six months? I can only hope that the market is looking forward to better times. Much, much better times.