“As soon as you figure out the key to the market, they change the locks.”

I don’t know who said this, but boy is it true.

None of the equations work all of the time because the inputs are always changing. Markets resemble biology more than they resemble physics.

Just recently, we’ve seen examples of this with zero commissions, the impact of direct stimulus checks, and the ability of companies to start and scale a business with just a handful of employees.

An area where this applies to that I want to explore a bit further is emerging markets. When you think about the characteristics of EM stocks, you probably think about energy and materials. But what used to be true doesn’t always remain so.

In November 2009, these two sectors were responsible for 29.8% of EEM. Now they’re just 14% of the index. Technology went from 15% in August 2017 to 27% today. This comes from Ben Johnson over at MorningStar. The chart tells the whole story. 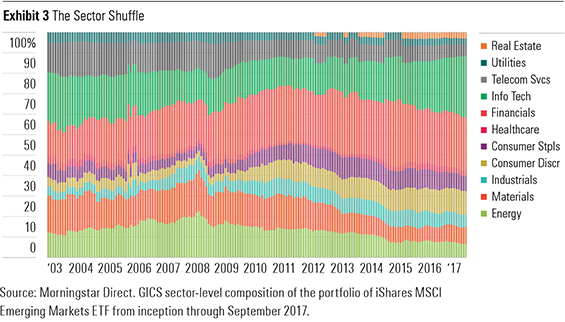 Another example of the way market dynamics are changing is initial public offerings.

This next chart from the Wall Street Journal is one of the crazier things I’ve seen recently. SPACs, which were once the subprime of IPOs, basically came out of nowhere and are now the most popular way for private companies to go public. SPACs have raised $38 billion this year, twice as much as traditional IPOs.

So few investors produce outsized returns over time, from one decade to the next, because what used to work eventually stops working. Or at least it gets a lot harder.

For most people, the answer to an ever-changing market is diversification. It’s not fun. You won’t get rich quick. But you’ll save a lot of time, energy, and frustration.