If you want to listen to me read this blog post, you can do so below. Otherwise, jump to the text.

Investors are ravenous. They’re filling their bellies like there is no tomorrow.

Since the start of last year, according to The Wall Street Journal, SPACs have raised $130 billion. $26 billion of that came in January alone. 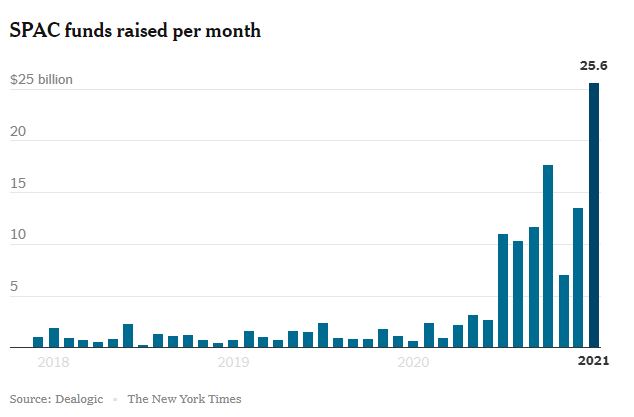 The Wall Street Journal reports that 15 non-biotech startups with zero revenue either completed a merger or announced one that values them at $1 billion or more. According to SPAC expert, Jay Ritter, “That already exceeds the annual peak in large listings by zero-revenue companies during the dot-com bubble.”

Two weeks ago Ben Carlson called me and said, “Holy shit. Packy’s latest syndicate just sold out in like 2 hours.” Actually, it was 64 minutes. Packy McCormick, whose name you’ve heard if you’re an Animal Spirits listener, brings these deals to investors on Angel List. I’m going to write more about this next week, but for now, all you need to know is that like everybody else, he is oversubscribed.

This week I was riding the Peloton when Ben called to tell me that Packy’s newest deal just dropped. I said, “I’ve got 11 minutes left, think I have time?” I was only half-joking. This thing filled up in two hours.

Investor’s insatiable appetite extends far beyond public and private equity. No doubt you’ve heard about non-fungible tokens, or digital assets that authenticate ownership of everything from art, to music, and basketball cards. I wrote about Top Shot last week, a newish thing that sits at the intersection of sports and investing.

Any time they announce a new pack, their servers are flooded with people trying to find the golden ticket like Charlie  from Willy Wonka & the Chocolate factory.

If this looks like a bubble that just burst, it’s basically the opposite. 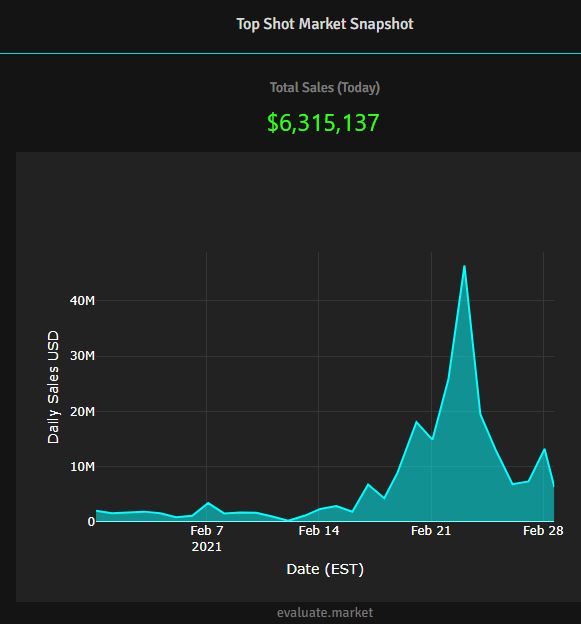 Top Shot disabled new accounts several times over the last week. The marketplace, where you can buy and sell moments, was disabled for maintenance almost every time I went on. I expect these numbers in the next few weeks to make this look like a blip.

Over the weekend, the team at Top Shot did something smart. They guaranteed packs to anybody who wanted one. If you were in the queue, whether you were number 5,000 or 200,000, and yes there were over 200,000 people waiting, you would be getting a pack. This is smart because eventually, people would get tired of waiting in line with nothing to show for it. For example, I think I’ve been in line 6 times and I only hit once. Moving on.

If the ownership of a digital highlight doesn’t make sense to you, then you’re going to really love the next thing. Feast your eyes on CryptoPunks.

What are CryptoPunks? This is from Larva Labs, which I’m guessing is the platform that created them.

The CryptoPunks are 10,000 uniquely generated characters. No two are exactly alike, and each one of them can be officially owned by a single person on the Ethereum blockchain. Originally, they could be claimed for free by anybody with an Ethereum wallet, but all 10,000 were quickly claimed

If you’re interested in being the owner of one of these, be prepared to pony up $30,000. That’s the cheapest one listed for sale right now.

They’re making the scarcity argument that everybody else is making, leading to an abundance of scarcity. You can laugh, but right now, it’s working.

You’re probably thinking that this won’t end well. Non-fungible tokens, SPACs, cryptocurrencies, stocks, the whole lot of it. Believe me, I get that mentality, but everybody thinks that. I would suggest you take a second and open your mind to the fact that it might not end badly.

I’m only saying that it’s possible.

John Tempelton, who is famous for saying “The investor who says, ‘This time is different,’ when in fact it’s virtually a repeat of an earlier situation, has uttered among the four most costly words in the annals of investing.” But Templteon also said that 20% of the time they’re right.

So maybe it’s not different this time, it probably isn’t. But maybe it really is.