My first experience with this new technology was the hit sensation, Serial, which really put podcasts on the map in 2014. From there I discovered Bill Simmons, Tim Ferriss, Dan Carlin, and others.

Something that barely existed 10 years ago has become a part of my daily life.

I had heard about this on-demand radio prior to 2014, but I was such a devoted Howard Stern listener that I figured I didn’t have time for another form of audio entertainment. We always find reasons to shrug off new ideas.

But now I’m all in on audio.

Yesterday somebody tweeted Packy McCormick’s post “The Value Chain of the Open Metaverse.” My mind was blown. I remember reading this all the way back on…January 25th. It feels like a lifetime ago.

I was vaguely familiar with this concept thanks to Matthew Ball, but still, this read like science fiction. Fast forward to today and all the stuff that Packy was talking about has exploded onto the scene. So I wanted to read his piece again to see if it made more sense this time. But holy shit, this was sooo long. I scrolled down for 30 seconds and shook my head, nope. But then I remembered that Packy has been turning his blogs into audio! So I went for a 30-minute walk, put Packy on 1.25x speed, and downloaded that blog right into my ears. It was marvelous.

You’ve probably seen people talking about Clubhouse. Oh, great, another thing. I get it. Just hear me out. Last night I hopped on a chat with Howard Lindzon and a few other friends from the Twitter community. For 30 minutes we chopped it up about growth stocks and de-fi and Top Shot and everything else that’s going on right now. It was awkward at times, with people talking over each other, but it was also a lot of fun.

Clubhouse has been so successful that Twitter quickly stepped in to provide a competitor, called Spaces. On Monday I hopped onto a chat that was all about Top Shot. I don’t remember who was the host but I remember how I felt when I entered the room. I was blown away.

You could see everybody’s Twitter avatar, and while you listen, you can poke around to see who else is in the room. People with blue checkmarks float to the top, which is smart because that’s one of the biggest use cases for these types of things. It gives you access. Access to people you never would be able to hang out with. And that’s what these Spaces feel like. It feels like you’re hanging out with, forgive me, the cool kids.

Take the Top Shot chat for example. I can’t remember a single thing that was said, but I remember who was there. Adam Bain the former COO of Twitter. I don’t know Adam, but I know that for a few minutes, we were hanging out, doing the same thing. 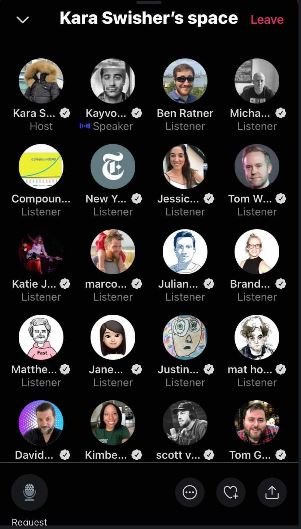 One of the people Kara opened the mic to was the head of product at Twitter. They were talking about Tweetdeck and other things the company is working on. I only stayed for a couple of minutes, but I thought, wow, I get it.

I don’t know that I see myself becoming a power user of these platforms, but I see its enormous potential. It’s great for people that want to chat, and it’s even cooler for people who just want to listen. It feels like you’re hanging out with famous people, and I wouldn’t underestimate how powerful that is.

I don’t think this goes away when the pandemic is over. I think it’s just getting started.

I’m not trying to give anybody homework. If you don’t want to add another thing to your life, I totally get it. And I’m here for the “I’m not going on Clubhouse live in 10 minutes” tweets.

But it’s not every day that you experience something once and think, wow, this is going to be huge. So if you’ve been meaning to check it out, then maybe this is the nudge you need. And if you’re rolling your eyes over this, that’s cool too.