A few years ago, I made a version of this chart highlighting the most famous investors of all time. It shows each investor at their 22nd birthday, ostensibly when they got into the financial industry. 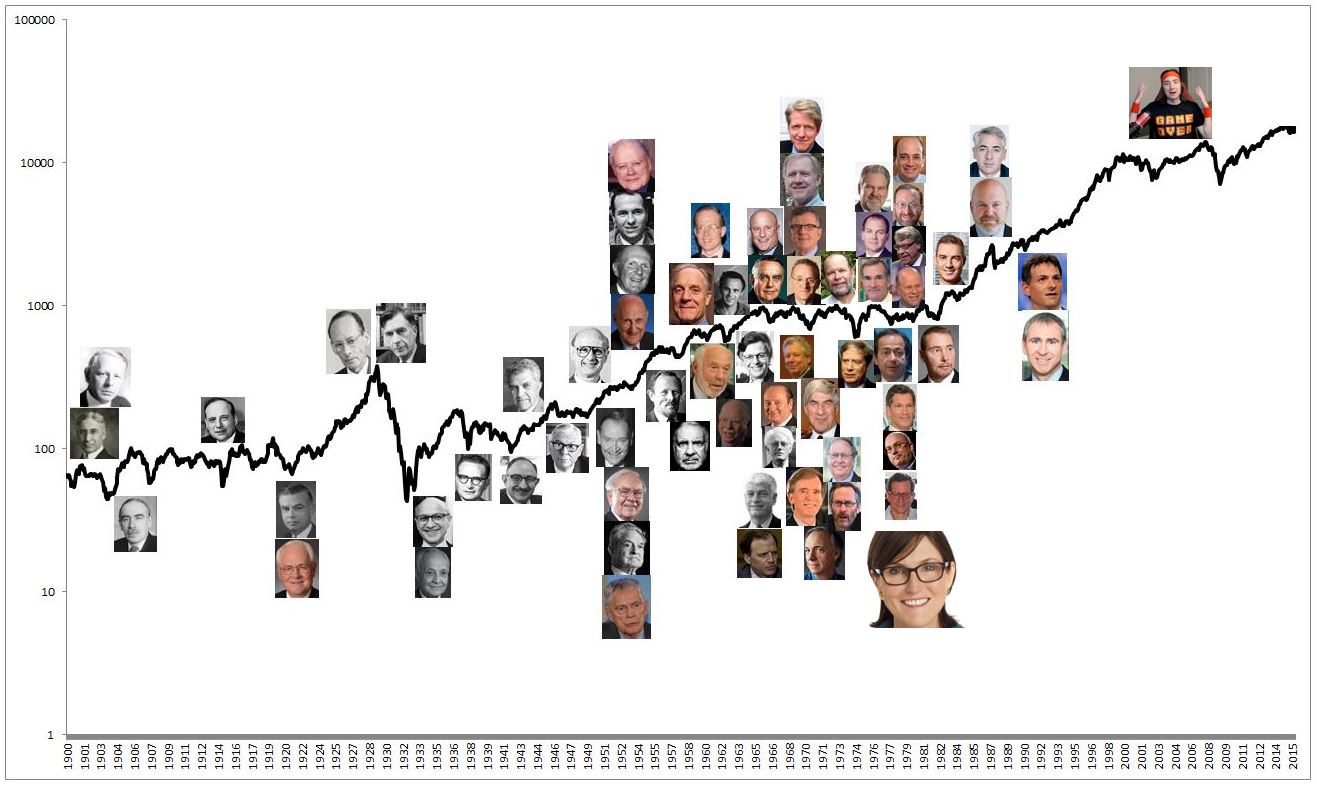 There are two glaring omissions in this chart: one, a lack of diversity. There are no people of color on this list, and there are no women. The other notable thing is that the youngest of them, Ken Griffin and David Einhorn, were born in 1968.

Cathie Wood’s Ark ETFs are on absolute fire. Last year, all 5 of her actively managed funds gained over 100%. They went from $800 million in assets in January 2018 to $50 billion today, a 62x increase.

The driver of her success has been a potent combination of story-telling and success.

Wood has developed a cult-like following on the back of her wizard-like returns. A few weeks ago, a friend of mine who owns Ark ETFs said, “I think it’s impossible for her to lose.” This type of adoration, bordering on delusion, is common among her fans.

And on the other side are a group of people that cannot wait to see her funds blow up. I want to break down why.

A few caveats before I get to this. Her army of followers dwarfs her legion of haters. And not all of her critics fit the profile that I am about to describe. There are a group of investors that objectively take umbrage with some of the things she says. And while they might be on the other side of her trade, they aren’t rooting for her personal demise.

So why do some people hate Cathie Wood? The obvious answer is because she’s an outsider. She doesn’t look like “one of us.” I think there’s more than a little truth here, but I think this is just one part of a bigger schadenstory. Her gender is absolutely an essential part of this, but there are other factors at play. The people rooting for her downfall are the same people who want to see Elon Musk crash and burn. Ditto for Chamath.

Most of the people hoping for Ark to come back down to earth are traditional stock pickers. They have had a difficult time over the last decade, especially if their style skews towards value. The market has rewarded high growth and high cash burn companies for a long time now. The backdrop that fueled her success has led to their failure.

If I had to characterize what her detractors think about her, here’s what it would look like:

Yeah she’s winning right now, but it’s not going to last forever. The crazy predictions that she made, like Tesla hitting $4,000 in five years, she just got lucky. Elon is a con artist and god I hate him and ugh I can’t believe people don’t see through his bullshit.

And look at her investors. It’s all dumb money. This will end badly for them.

Here I am busting my hump, doing real analysis, and people aren’t giving me money because my returns look terrible compared to hers. And without the Fed and easy money, she’d be nowhere. Ugh I can’t wait until ARKK crashes and burns. Once her style stops working, mine will start and I’ll be able to show everybody that I know what I’m doing.

In the minds of these people, Cathie Wood is the face of “all that is wrong with the investing world today.”

Her success makes other people feel bad about what they’re doing. And that I can understand. I’ve looked at ARKK more than once and felt like an idiot for not owning it. So it doesn’t come as a complete shock to me that some people are rooting for her returns to come back down to earth, even if it’s nothing personal. It will make them feel better about what they do. I totally get the desire to be able to say to themselves and others, “See. I knew I wasn’t crazy.”

We’re always rooting for people at the top to fall. It’s in our nature. It was true in 1596 when Shakespeare wrote: “Heavy lies the crown” (the actual quote is “Uneasy lies the head that wears a crown”). It’s still true today.

The people who don’t like Cathie Wood have been chomping at the bit over the last few weeks as her flagship fund fell 30% from its high. They’re hoping for a self-fulfilling cycle that will feed on itself. Her stocks go down, she gets redemptions. This will push her stocks down further, and she’ll get more redemptions. And then they win. To these people, I’m sorry to say this is wishful thinking.

She has a loyal fan base who won’t be scared away by a few bad weeks, which you can see in the chart below.

A lot of volatility in tech this week, but $ARKK is still on track for a record weekly inflow pic.twitter.com/ckAZiwExwf

I’m not saying her investors are completely inelastic, but it’s going to take a lot longer for the love affair to end than her haters believe. I don’t know if that’s months or quarters, but I’m pretty sure it’s not days and weeks.

Ben and I got into this and much more on the latest episode of Animal Spirits.