It’s been one year since the market bottomed. Okay, fine, you got me. The real date was March 23rd. But since there will be a million posts on the actual anniversary, I thought it would be a good idea to front-run them. And even though the S&P 500 didn’t bottom a year ago today, 31%* of stocks in the index did, so I’m within my rights to write this.

This was the only recession in the history of markets where everyone knew that the economy was going to contract on the same day. And since we all knew on March 11th that things were about to change, the market quickly responded. It’s crazy to think that stocks bottomed just 8 days after that night when we got the news dump of Tom Hanks/Rita Wilson/NBA stopping a game.

The companies that would be most damaged by the shutdown got hit the hardest.  These same stocks also bounced the most, as is clear in the chart below. If you fall 80%, you have to make 400% to get back to even. Remarkably, a lot of these companies did just that. 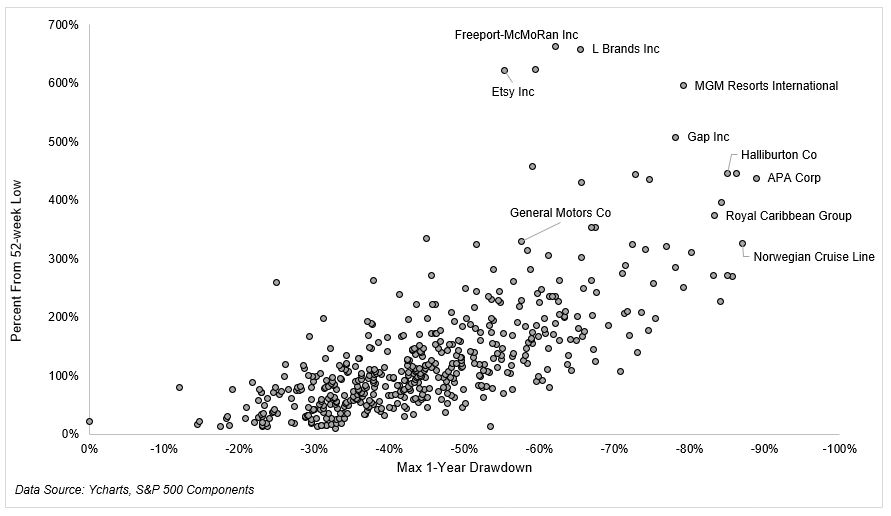 90% of stocks bottomed in March, and since then, they have done remarkably well. Over half of the index is up more than 100% from its 52-week low. 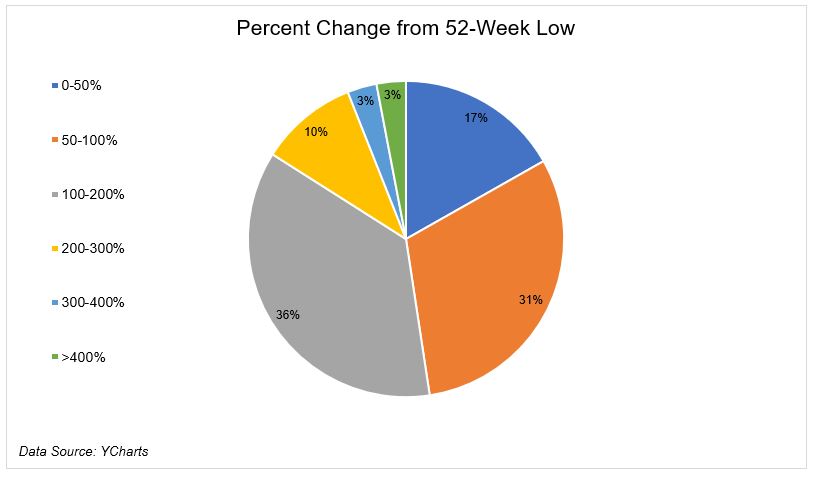 I turned to Nick Maggiulli for a more granular breakdown of how various stocks have performed. As we know, smaller, cheaper stocks have done the best. I should mention that Nick went back and grabbed these numbers from the bottom. In other words, we looked at the smallest and cheapest stocks a year ago compared to where they are today, as opposed to looking at the smallest and cheapest stocks today compared with where they were a year earlier.

This chart shows the S&P 500 broken down into deciles by their size. Smallest on the left, largest on the right. The smallest stocks were hit the hardest. They also bounced the hardest. The same goes for value stocks. 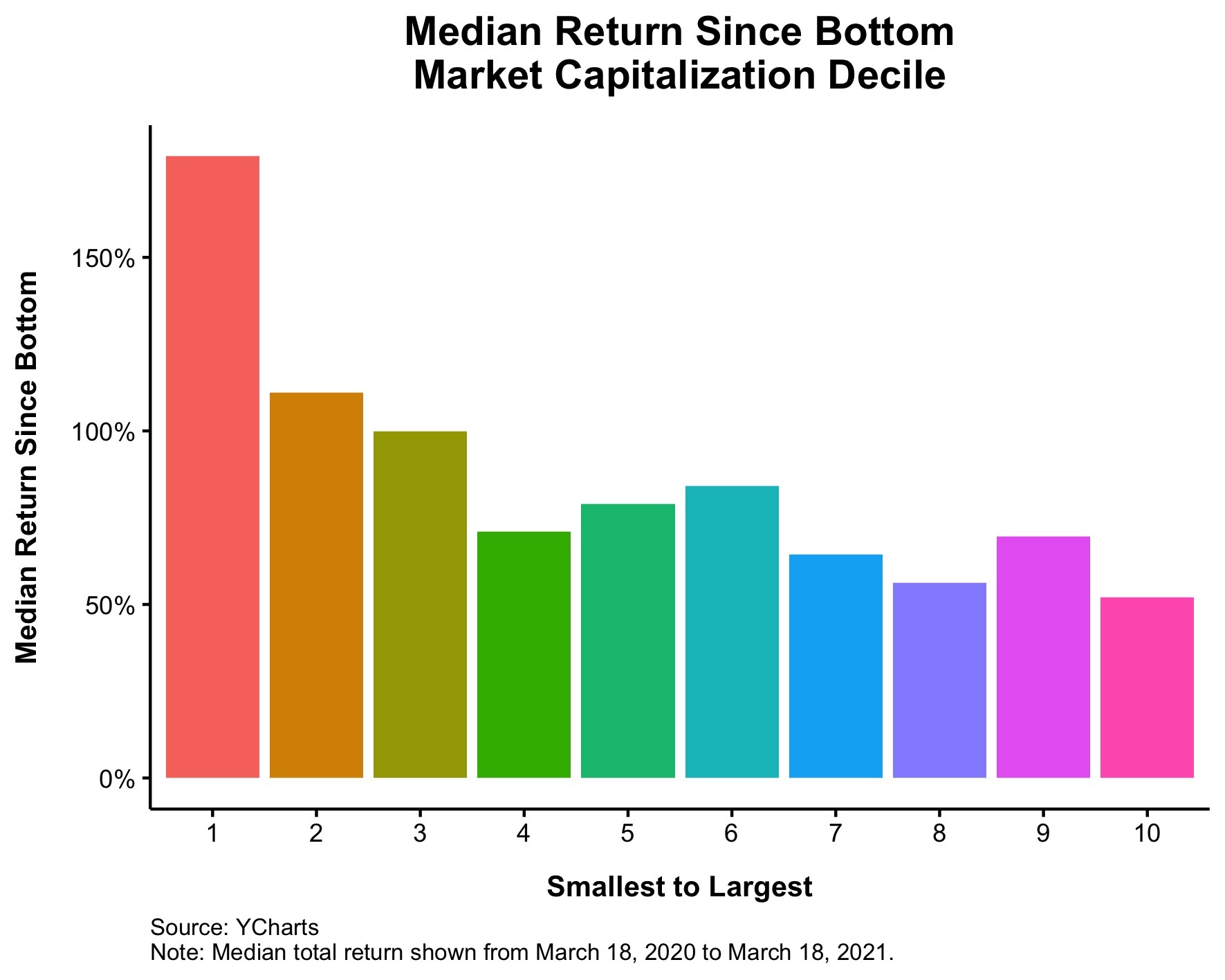 The next 3 charts show that cheaper stocks have performed better than expensive ones. Here they are sorted by price-to-book. 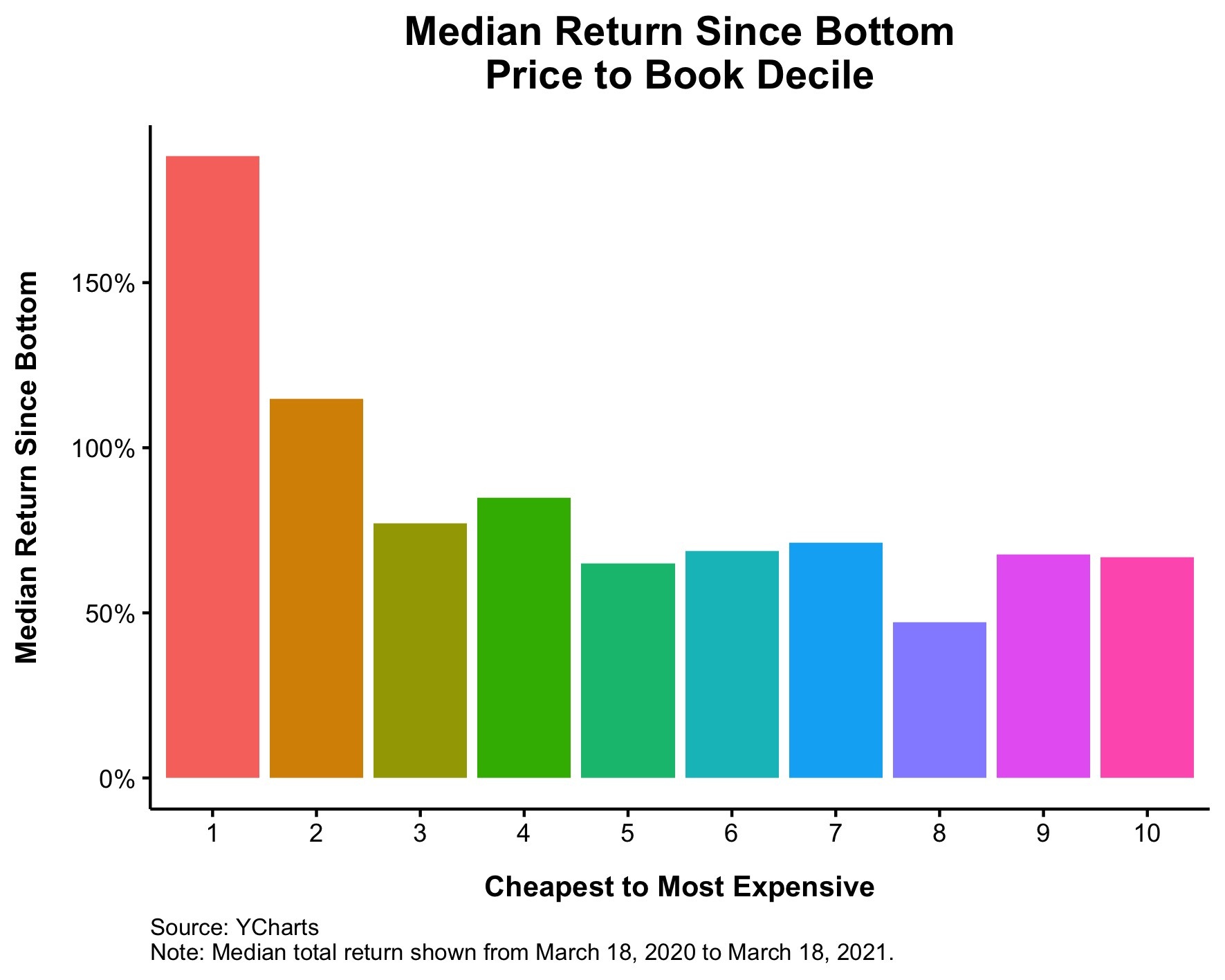 This one shows price-to-earnings. 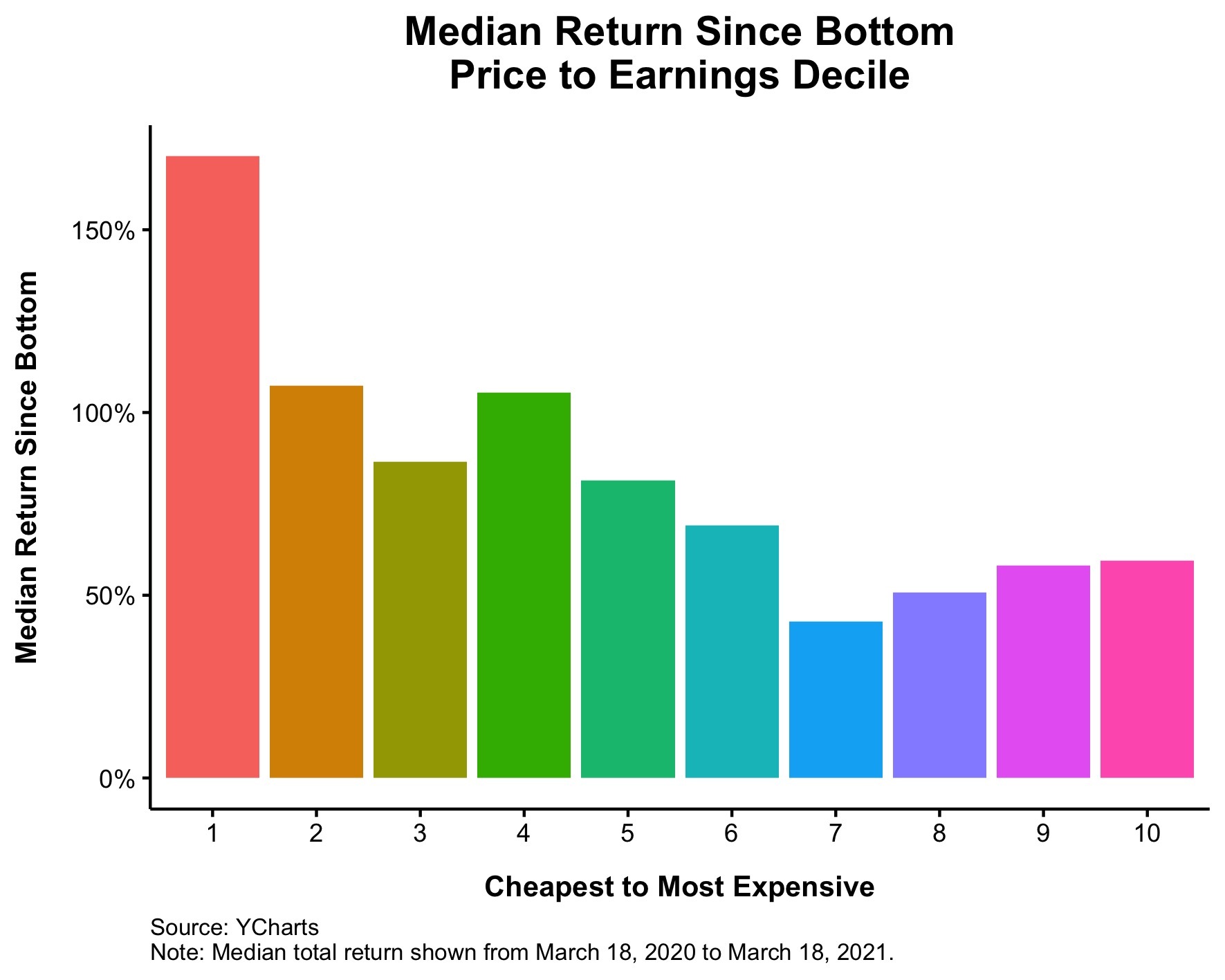 This one shows price-to-sales. Whatever metric you look at, statistically cheap stocks have outperformed. 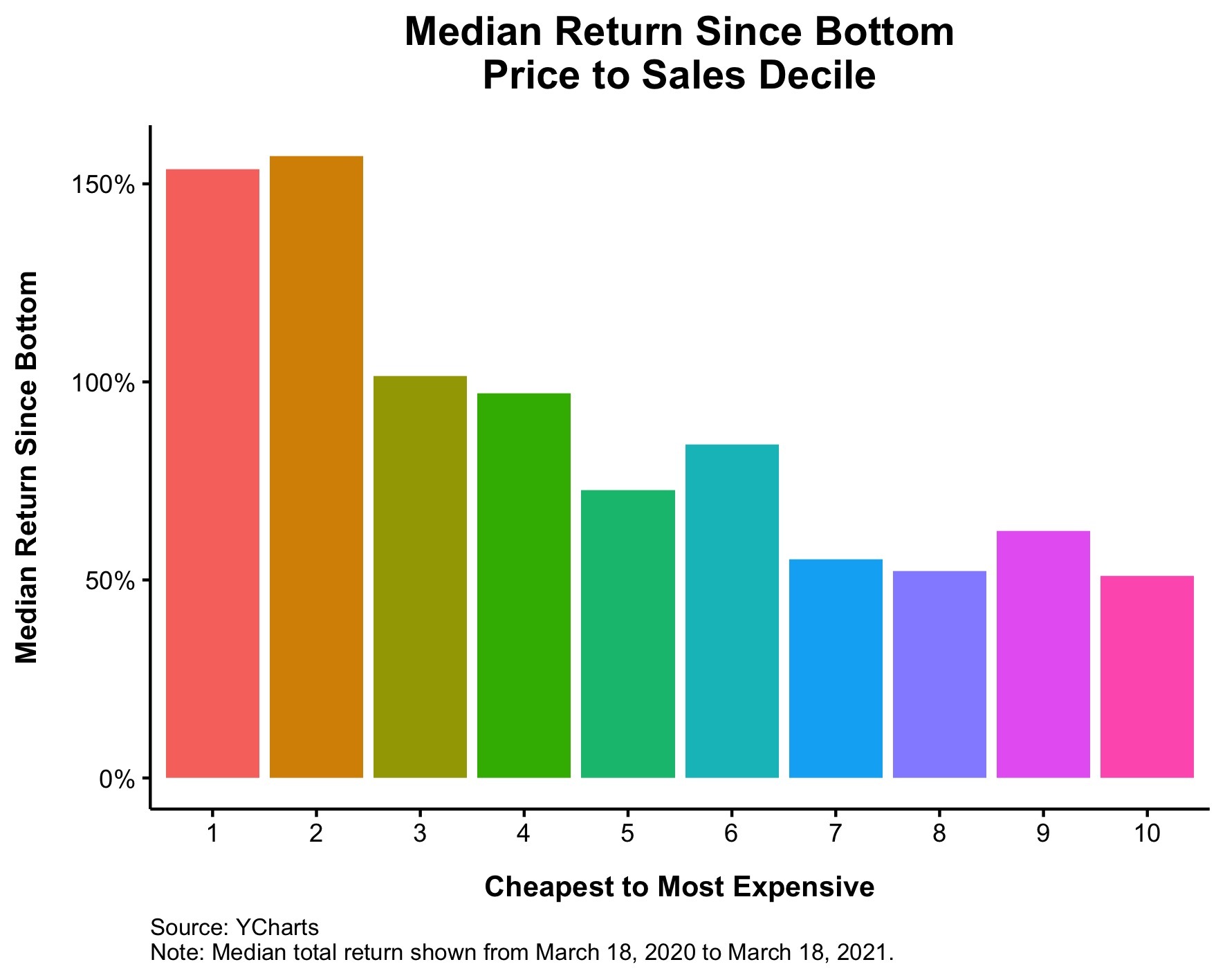 The last 12 months have been a wild ride that might have changed the markets forever. I think policy response, for better or worse, will never be the same. Mailing checks during recessions could become the new norm. The other aspect of the market that is never going back is retail participation. Nobody was talking about trading and investing in 2019. Now it’s all anyone can talk about, and I don’t necessarily think a bear market will change this dynamic. The retail investor is back.

One of the big lessons from 2020 is that risk is always present, even if we don’t always feel it. Things were smooth sailing until they weren’t.

The other big lesson is that survival is the name of the game. It’s not about maximizing returns. It’s not about beating the market. It’s about staying the course. And you can only stay the course if you have a course to stay on. So if you didn’t have a plan in 2020, make that a goal for 2021.