Michael Cembalest and the team from JP Morgan Asset Management are out with an update to one of my favorite research reports ever. They first wrote about the risks and rewards of a concentrated stock position in 2004, updated it in 2014, and are out with version 3.0 today.

This data point has had as big an impact on how I see the world of investing as anything else:

More than 40% of all companies that were ever in the Russell 3000 Index experienced a “catastrophic stock price loss”, which we define as a 70% decline from peak levels which is not recovered

Stock picking is hard. Even the best stocks like Apple and Amazon get killed. The difference between the winners and the losers is the former recover and the latter never do. Don’t kid yourself, in real-time nobody knows which bucket these companies will fall into. 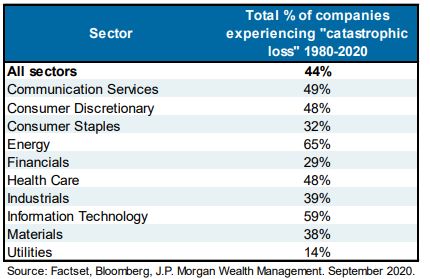 Here’s one more data point that made me respect how difficult it is to generate alpha (emphasis mine):

The whole thing is well worth your time. Hit the link below.