If you would prefer to listen to this, hit the link below.

Matt Levine wrote about private investments. Here’s what he said:

The best deals used to be reserved for the best investors. But as more liquidity entered private markets, and finding money was no longer the primary issue, founders now have other factors to consider. One of the biggest factors is getting their product or services in front of users. Traditional venture capitalists are no longer the only game in town.

On a podcast with Patrick O’Shaughnessy, Jesse Walden said: “We are entering a paradigm shift where everyone is an investor.”

My favorite “everyone” turned investor is Packy McCormick. His substack, Not Boring, has taught me so much over the last year.

In one of Packy’s brilliant posts, Software is Eating the Markets, he talked about the non-financial reasons why people invest. Things like social status and entertainment are becoming a qualitative part of quantitative reasoning**. This graphic helps explain why digital socks can sell for $100,000. 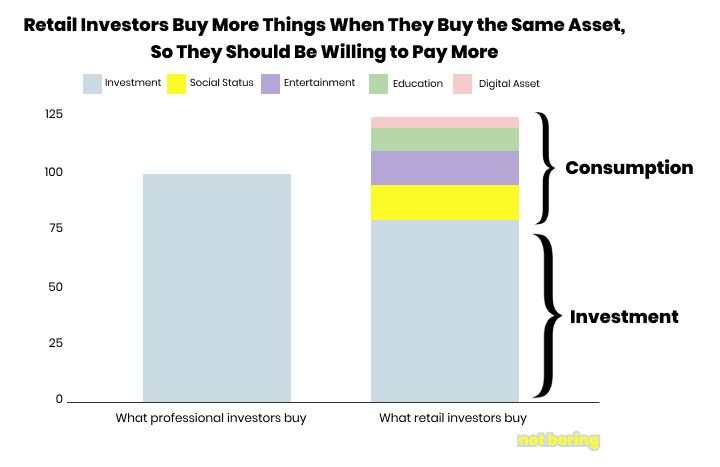 In this same post, Packy wrote about AngelList*, a platform that allows individuals to invest in private companies. He wrote:

The company makes it simple to set up a fund, take investments from LPs, and deploy capital into startups. In exchange, AngelList takes a fee and keeps a piece of the upside, or “carry.” As of 2019, AngelList had $1.8 billion in AUM, and 1,657 startups were funded on the platform last year. The company hasn’t released 2020 numbers, but I expect that there will be a significant uptick. Already, there are 47 unicorns in the portfolio — AngelList, via its carry and investments it makes in deals, sneakily has one of the most impressive startup portfolios in the world.

In this piece, I learned that Packy has his own syndicate on AngelList. He uses his newsletter to generate deal flow, which immediately resonated with me. Using content to generate business is something I’m very familiar with (shameless plug).

I’ve made 6 investments in the Not Boring syndicate since December and have been blown away by the quality of the deals. Why is he getting access to these things? Because he has over 50,000 people subscribed to his Substack, and they’re the people these companies want to get in front of.

The founders for one of the companies I invested in were all Stanford Grads with multiple PhDs. They had previous work experience at the Silicon Valley companies we all know and love (or hate, in some cases). The fact that I can invest just $1,000 in something like this is mind-blowingly cool. Sure, statistically speaking, they’re probably not going to make it, but the fact that I even have a chance to invest at the ground level in something like this is exciting.

Another deal that Packy brought to his investors had some huge names on the deal. You would recognize these people from other companies they’ve started. One of them is the founder of a company that recently went public. Another deal had the backing of a major VC firm that sold out in an hour.

As I said, most of them are going to fail. 81% of companies fail to exit. Even ones that raise money multiple times usually don’t make it! This is why I’m only putting $1,000 in each of them. Hopefully, there will be a winner or two that make up for all the ones that don’t work out.

Surprisingly raising venture capital does not have a lot of correlation with startup success. pic.twitter.com/2QuNgfj9qH

And the best part about this is that if one of these deals hits, it will be in a tax-sheltered vehicle. I use AltoIRA to fund these investments. I have almost all of my retirement money in index funds, so I’m happy to invest in something that is Not Boring.

If none of these investments work out, then I will view them as a form of entertainment. I love seeing Packy’s deals show up in my inbox, and I enjoy the memos that he writes about the company.

Everyone is an investor these days, and I feel lucky to be a part of it.

*Unfortunately, AngelList is only available to accredited investors. If you work in the financial services industry, those standards are relaxed, which you can read about here

**This doesn’t make any sense, but I thought it read well