The best stocks almost always appear expensive. But that doesn’t mean buying a basket of expensive stocks is a good idea.

In Barron’s, Tony Sacconaghi shows that stocks with a price-to-sales ratio of 15 or higher have not fared well going back to 1970. 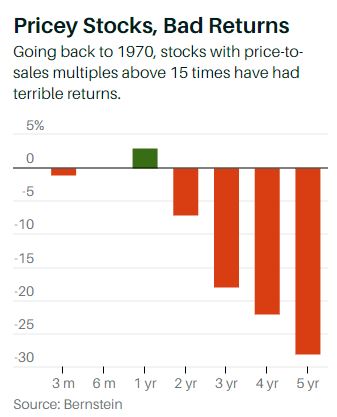 These days, the market is flush with stocks that appear expensive based on this criteria. Sacconaghi notes that 25 tech stocks were in this bucket in 2017. Today there are 366.

I wanted to look at how the price-to-sales ratio for some of the younger technology companies compares with the giants as they began their ascent.

Amazon is the outlier of this group. At its peak in the late 90s, it traded for 43x sales. That number crashed after the dot-com bubble burst. Sales exploded higher while the stock price came crashing down. In the last 15 years, the average P/S ratio has been 2.5x, trading above 5 only for a minute.

Google was expensive at its IPO, but quickly grew into its multiple, trading below 10x for the last decade.

Netflix has earned a premium multiple due to investor’s desire for annually recurring revenue. But even at its peak a few months ago, it never got above 15x.

Facebook, the youngest company of the group, followed a similar path to Google. 20x at the IPO and settling in at 8-10x. 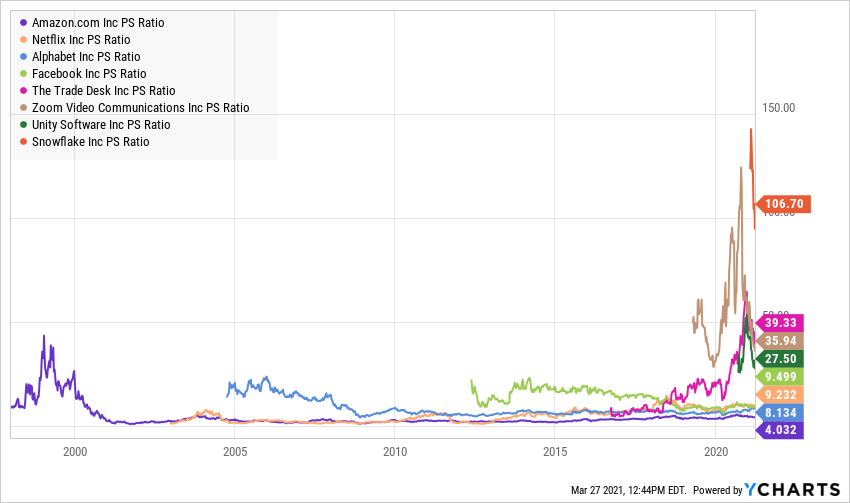 Now let’s take a look at some of the stocks today for comparison purposes. Holy smokes. 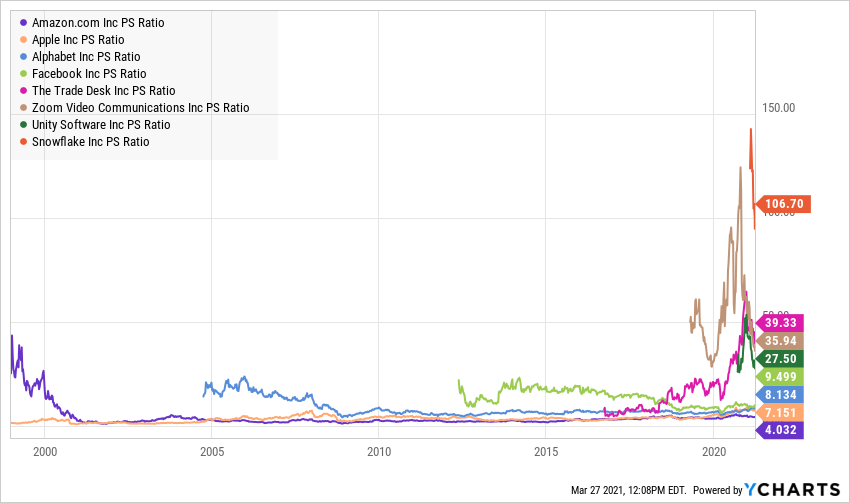 Zoom, The Trade Desk, Unity, and Snowflake all have higher price-to-sales ratios than Google or Facebook ever did. Have investors lost their minds? Maybe, but maybe not.

When Amazon came public, we had no idea what the internet would become.

When Netflix came public, they were mailing DVDs to customers and were a small player compared to Blockbuster.

When Google came public, there were 25x more advertising dollars spent on newspapers than on search. And smartphones weren’t a thing.

When Facebook came public, Amazon was half the size of General Electric and 1/4 the size of Exxon Mobil.

Comparing Snowflake’s valuation today to Amazon at the IPO is Apples to Oranges. We now know that $100 billion market caps are expected for the next generation of tech companies. $1 trillion is a possibility. And this is why investors are willing to pay what would appear to be ridiculous valuations by historical standards. It’s because the blueprint for growth is there. They can see a path for these becoming much larger businesses.

Listen, I’m not saying it’s a good idea to go all-in on these names. Buying stocks with price-to-sales ratios over 15 has historically been a terrible strategy. I’m just trying to explain how we got here. Oh yea, I should probably mention zero interest rates. That was a tailwind, to state the obvious.

Investors might have overdone it with what they were willing to pay for these names, so if these companies show even one hint of a slowdown, they will get cut in half or worse. But if they continue to redefine the way business is done, they might end up looking cheap in hindsight, even if they look ludicrously expensive today.