Well, that was fun. Here is a look at my Top Shot account.*

I wrote about my experience with this platform a few weeks ago, right as the hype cycle hit its apex. Oops. I didn’t know that was the top, but I did know the pace it was on couldn’t continue.

I’m having a lot of fun playing this game, but I know it can’t last forever. I mean, literally, it cannot. I bought a CJ McCollum moment for $425 and sold it 24 hours later for $799. If this were to continue at this pace, it would be worth (lol) over $1 million in 12 days. It has to slow down.

Since then, prices have crashed, albeit in a slow-motion sort of way. According to Lev Akabas, as of March 31, Top Shot’s market cap was roughly 50% below its peak. 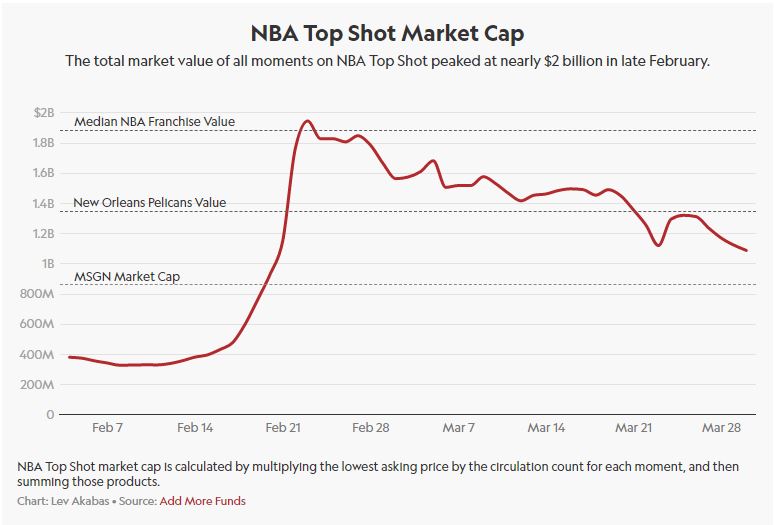 The market in February was the wildest thing I’ve ever been a part of. People could buy a $14 pack that might have a 5-figure moment inside. As a result, the demand overwhelmed supply. And as a result of this, supply caught up quickly.

Having 200,000 people in line for only 25,000 packs was unsustainable. Eventually, people would lose interest. I mean, how many times are you gonna wait in line without anything to show for it? So they did what they had to do and started expanding the supply. For example, here’s one of the recent releases. 325,000 packs. I get why some moments are truly rare and might retain their value, but it’s hard to continue making the scarcity argument at this point. 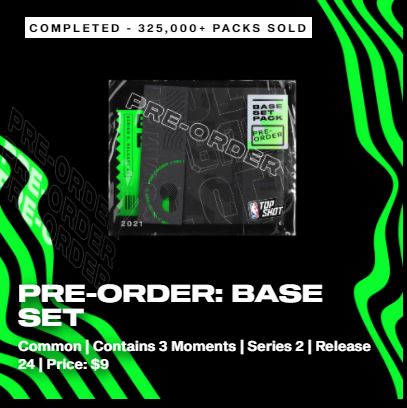 So here’s my deal. I put in $2,500 and started moving and shaking. At the peak, my moments were listed for ~$9k. But as the market slowed down and buyers dried up, I was forced to lower my asking price. I had to do this multiple times.

Now maybe shame on me. I’m not a long-term player. I was looking to come to a party, grab a few free drinks, and leave before anybody could throw me out. I was playing the greater fool theory, and it turns out I was the greater fool.

I don’t want to be a hater. I’m a Top Shot fan. I take responsibility for my own actions. I knew what sort of risk I was taking. In no way, shape or form am I pointing fingers at anybody.

In fairness to them, it’s not fair for me to say the bubble burst. This thing went from not existing to a $933 million market cap today (according to  Evaluate Market). And even though I didn’t leave with a huge profit, I didn’t exactly get killed either. I’ll probably end up taking a 10-15% haircut, depending on where the rest of my moments sell, which is nothing. Almost everyone gets wiped out when a bubble bursts. That’s not the case for Top Shot. At least not today.

If I had to guess, I would say that late February was the peak in Top Shot’s hype. It’s hard to see what could cause a second wave of mania.

That doesn’t mean I’m bearish on Dapper Labs, the company behind Top Shot. They just raised $305 million at a $2.6 billion valuation, so I’m sure they have big plans for the future. And they’re probably happy to be rid of people like me who were just in it for a quick buck. They’re trying to build a business that will be successful over the long term, and for that to happen, you need long-term customers.

Overall, this was an enjoyable experience, even if I lost a few bucks. Big deal. I view this as entertainment, which is the same way I feel about losing money at the blackjack table.

Even if I’m done buying moments, I’ll continue to buy packs and follow their story. And even though I think prices peaked, there are many reasons to believe that the future is bright for NFTs. I’m excited to see what happens next.

*The numbers are not 100% accurate, but they’re close enough. The way that Evaluate Market arrives at “account value” is they add up all your moments by “lowest ask.” Most of my moments are listed at significantly higher. For example, I have a Luka that is moment #500/15,000. The lowest ask is $127. Mine sold for $260. As far as the profit/loss goes, it doesn’t adjust for my cash on cash return. In other words, I paid ~$5k for the moments I currently own, but I only deposited $2,500. So the lowest ask versus my purchase price shows an 81% drawdown. Again, not entirely accurate, but yes, the damage has been done.