A trade becomes an investment when it goes against you. Instead of just taking a small loss, people go to extraordinary lengths to justify their original decision. We’ll look for something, anything, that confirms our priors.

But every once in a while, you buy something as an investment, and it goes so well that it can turn into a trade. That’s what my experience was like with Bitcoin. I want to share my journey from my first purchase until today, and what my thinking was like along the way. I’ll start by saying that I bought more Bitcoin today, bringing my total investment to…drumroll…1 full coin.

I was not an early believer in Bitcoin. I’m not a zealot today.

I’ll admit, I thought it was a joke at first. There are certainly some Tweets I’d like to take back. Oh well.

I started thinking about how I could diversify away from the S&P 500 in mid-2020. Not because I don’t believe in stocks for the long run, but because I believe too much in that mantra. I max out my 401(k). 100% of my bi-monthly contributions go into the stock market. Once a month, I contribute to my taxable account at Liftoff. Again, 100% of those dollars are going into the stock market. Finally, the ownership stake in RWM, my largest asset, has a tremendous amount of exposure to the stock market. I am all in on stocks, for better and for worse.

So I started seriously thinking about alternative assets with little correlation over time to the stock market, and Bitcoin certainly fits that description. The idea at the onset was to build a position in Bitcoin and never sell. Hold on the way up, hopefully, add on pullbacks, etc., etc. But it didn’t go the way I expected it to. Life never does.

My first purchase was on June 2, 2020. I wanted to build up to 1 Bitcoin and figured I would have plenty of time to do that. Wrong. My first purchase was at $9,565. I bought $1,000 worth or 0.1045 coins. Over the next few weeks, I made three more purchases under $10,000, bringing my total to .4 coins by July. And then the price started to run away from me. I’ll spare you the details of every purchase I’ve made over the last year, but you can see that I bought on the way up, and I definitely bought on the way down.** 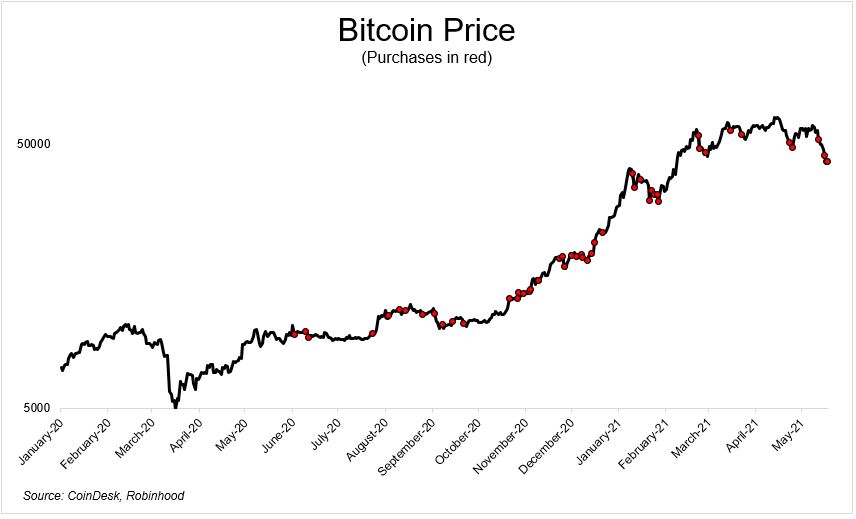 Today’s purchase was the largest one yet. At over 50% off its highs, I feel very comfortable being uncomfortable. I mean, if not now, when? I have no idea if it goes lower, but I’m not interested in nailing the bottom. 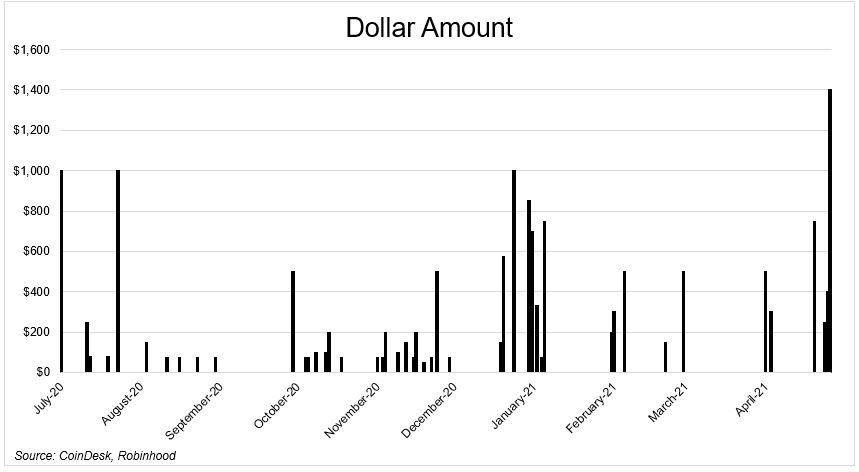 Alright, so getting back to my initial point about how an investment almost became a trade. In just seven months, I was up over 250%. I don’t know that I ever really thought Bitcoin would get to $50,000, and it happened just 9 months after I bought it. 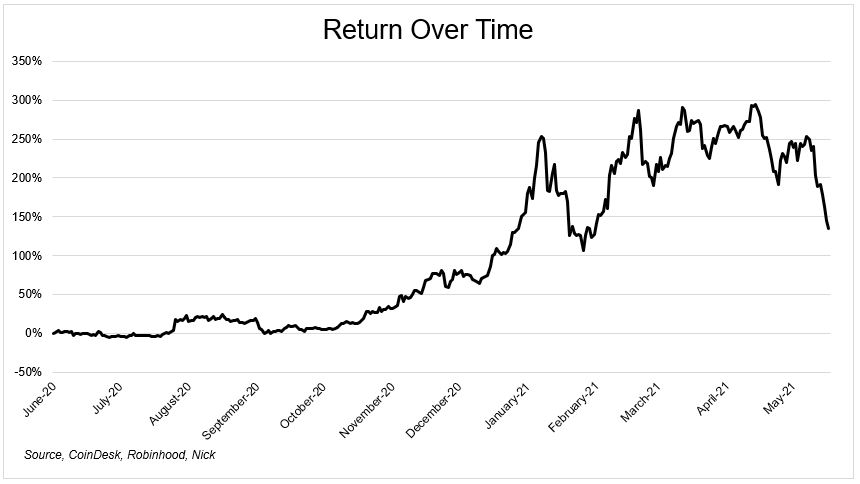 There’s nothing wrong with turning an investment into a trade. In fact, we should only be so lucky. If every long-term purchase skyrockets in the short-term, you’re going to get very rich very fast.

Over and over, my internal dialogue went something like this, “You’re up so much money. More than you ever thought you would make. Just sell it and move on.”

But then I had two thoughts. First, where would I put it? I’m in Bitcoin to get away from the stock market. That was true then, and it’s true now.

I was very confident that Bitcoin would have a sell-off like this at some point, but I didn’t know where it would start from. It could have gone up to 90 and then back down to 60 just as easily as it went from 60 down to 30.

And then there are taxes to consider. Let’s say that I wanted to play the game of locking in gains now and buying at a lower price.

If I were to pay short-term capital gains on Bitcoin, I’ll use 30% as an example, then if I sold it at 60, buying at ~47 was my breakeven number. So let’s assume that I got lucky and did better than breakeven. Hypothetically I put all my Bitcoin back in at 40k, then where would I come up with the money to pay my taxes?!? And for what, a small incremental gain? Looking at it through that lens, this wasn’t that hard of a decision. My investment is an investment.

I have no idea where Bitcoin goes from here. Obviously, I am a long-term believer. Otherwise, I would have sold it. But of course, I get the bear case. Believe me, do I get it.

I continue to hold Bitcoin because of its uniqueness. I’m not talking about the blockchain or any potential use cases. I’m talking about how unique it is in terms of investor mentality. With most investments, it’s easy to sell a big winner if you frame it through the lens of regret minimization.

If you sell a big winner, and it goes up. Okay, that stings, but you’ll live. If you hold onto a big winner and watch it get cut in half, you’re never going to get over it. You’ll be disgusted by how greedy you were. With Bitcoin, I have the opposite mentality.

I’ll be okay if my Bitcoin position is worthless in ten years, but if it goes up to six figures, I don’t know that I’ll ever forgive myself. At $100,000, I’ll be happy to pay the long-term tax bill. I think

*I wrote about different investments I’ve made in this post

Ben and I spoke about the opposite of a trade becoming an investment on this week’s Animal Spirits.