Ben Carlson has this idea that this is the way going forward. He thinks that what we saw in 2020 is the norm, in terms of how quickly stocks fell and then recovered. Prolonged bear markets, he says, could be a thing of the past. He’s basically saying that risk cannot be eliminated, but it can take different shapes.

Ben thinks that bear markets won’t take 18-months to play out the way they used to. The tradeoff is that we’re going to have more corrections that happen quicker. His reasoning is that markets will anticipate a response from the fed and treasury, and maybe even force their hand with violent declines. Government officials already have the playbook from 2020, and will use this going forward.

I see where he’s coming from, and I think it’s possible, but I don’t think it’s likely.

Before we talk about the future, let’s take a quick look at the past. This chart might be a bit of an eyesore, but it shows the history of how long it took for stocks to get back to even following a bear market. 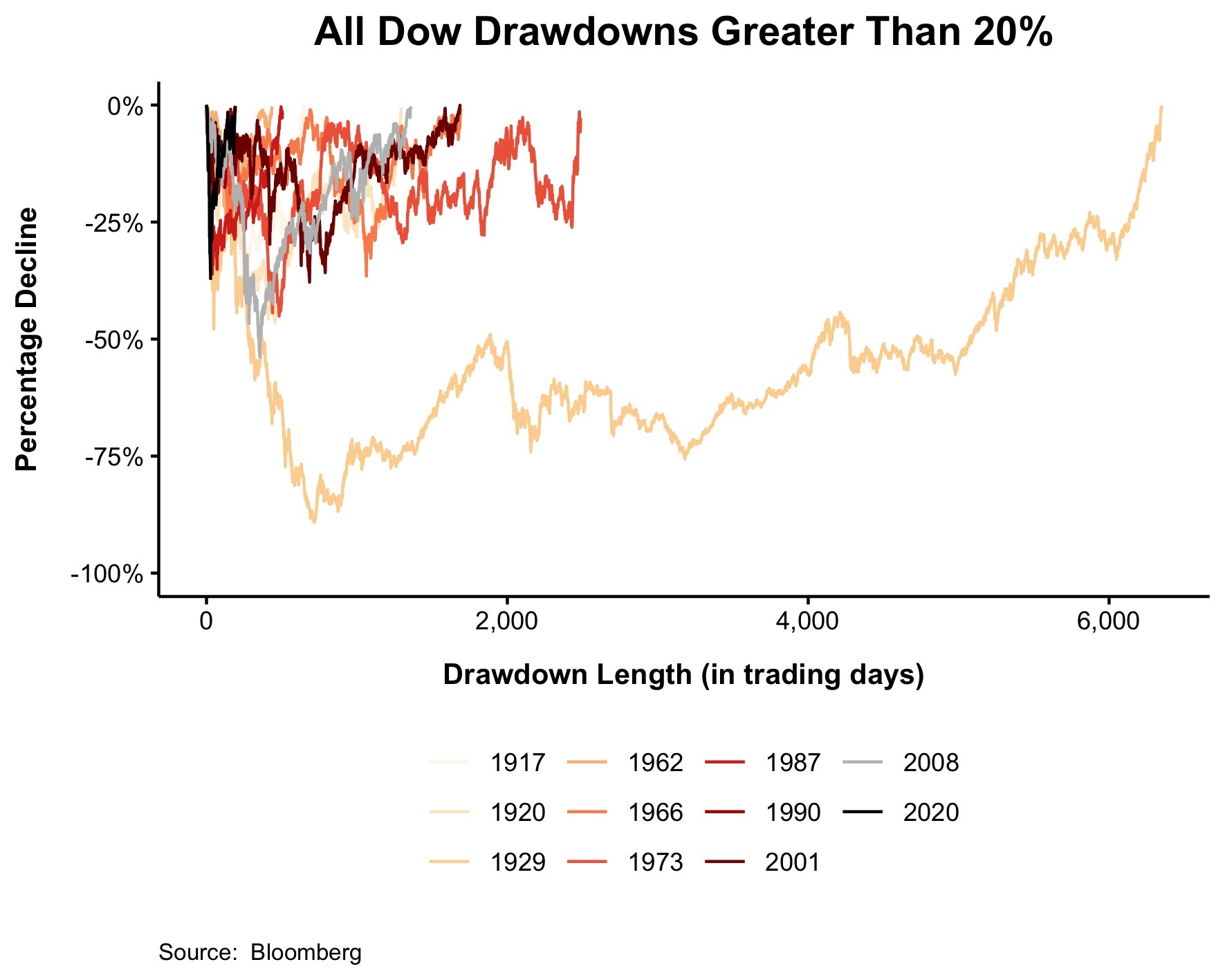 Most of the time, stocks were fairly slow to digest information. The tech bubble, for example, peaked in March 2000 but didn’t bottom until October 2002, two and a half years later.

The black line, 2020, is clearly an outlier. Stocks went from a peak to a trough in record time. It was the fastest bear market ever. Stocks also went from trough back to the peak in record time. The median bear market, excluding 2020, lasted 1,091 days, which is over 4 years. In 2020, it was over in 192 days.

So the question is, was 2020 an outlier? Or will the next recession and bear market follow the same script?

On March 11th the entire world found out that our lives were about to change. That night, Tom Hanks and Rita Wilson let the world know they had contracted the virus. Also that night, the NBA canceled a game and told the fans to go home. Shit got real.

The market bottomed when the Fed announced that it would buy an unlimited amount of Treasury and mortgage securities. They bought more government-backed debt in a week than all of QE 2! They also signaled to the market that they would be buying corporate bond ETFs, an unprecedented move. And then on March 27th, we got the fiscal response. Congress passed the CARES Act, a $2.2 trillion economic stimulus bill.

Monetary and fiscal policy united in a way that we’ve never seen before. Everybody knew that the economy could not survive an economic shutdown. So we sent checks to individuals and businesses to get them through to the other side. It worked. And if it worked this time, why would we not do it next time?

Well, because the next bear market probably won’t be caused by an externality like the Corona Virus. Sure, if a meteor hits, then we’ll get the same time of coordinated response.

I just can’t get behind the idea that the risk of a long bear market is off the table. If the only risk is that stocks fall and recover in a matter of months, then buy the dip is literally the only thing that investors need to know. “Buy the dip because stocks always come back and they always come back soon.” Come on, Ben. You don’t really buy that, do you? Do I have to show you Japan?

I agree with Ben that markets process information a thousand times faster than they used to. This has and will continue to impact the markets in ways we can’t predict. And while his theory certainly could play out over the next few years, I don’t think it can persist indefinitely.

I’m so excited to share that Josh and I have been working on something new. We’re doing a show called The Compound and Friends every week where we bring a third guest into the studio, live and in person. It’s not an interview, it’s just us hanging out and turning the recorder on.

For the pilot episode, we brought in Packy McCormick, who is one of my favorite people on the internet and in real life. We spoke about Ben’s theory, crypto, and so much more. I hope you all like it.