It’s hard to make a profit when you don’t make any money.

This describes the state of the food delivery business, which according to the founder and CEO of GrubHub, “is and always will be a crummy business.”*

It’s hard to believe he actually said this, but then again, he’s not lying. You might recall a few years back when he basically said the same thing using different words. In October 2019, prior to their earnings release, they sent out a shareholder letter to be like, yeah this is about to get ugly.

Supply innovations in online takeout have been played out and annual growth is slowing and returning to a more normal longer-term state which we believe will settle in the low double digits, except that there are multiple players all competing for the same new diners and growth.

You might be surprised to hear that investors did not care for this very much. Or what was in the report. The stock went from ~$60 to $33 the next day. 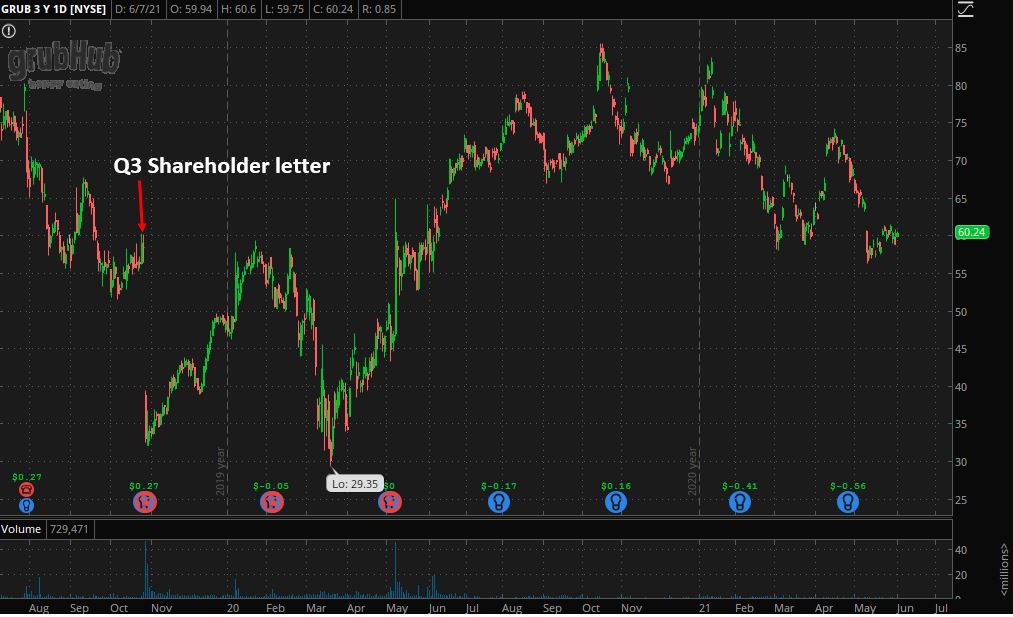 It’s been almost two years since that bruatlly honest letter came out and the stock is right back where it started, at $60.

Food delivery just isn’t a very good business, like Maloney said. During the height of the pandemic, their competitor DoorDash, the biggest player in the space, ended up with 90 cents on the average order of $36, according to the WSJ.

Only 6% of the U.S. population uses DoorDash, so I guess it’s got that going for it. The economics of this business are tough. Even without competition, it’s hard to see how the numbers work.

Josh, Packy, and I discussed this on The Compound and Friends.

*This literally had to be taken out of context. I just cannot believe this guy was like, “Yeah, awful business. Just awful. Can’t believe people actually own our stock.”