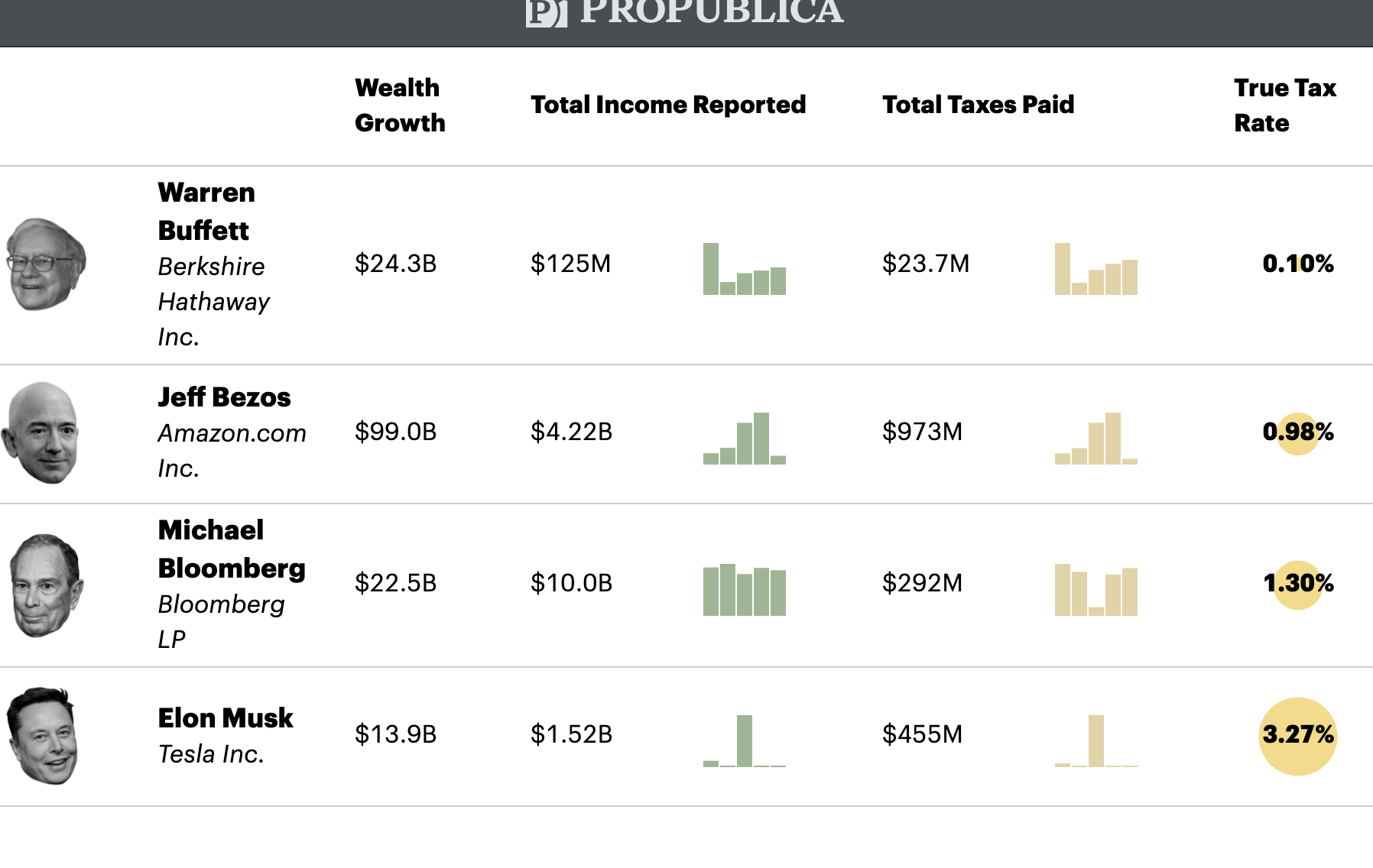 Pro Publica is out with a new piece showing how many of the world’s richest people, like Jeff Bezos, Elon Musk, and Carl Icahn, went years without paying any federal income taxes.

In 2007, Bezos’s net worth increased by $3.6 billion, thanks to Amazon’s stock price. That same year, his income was $46 million. How much did he pay in federal income taxes? Zero, point, zero. “He was able to offset every penny he earned with losses from side investments and various deductions, like interest expenses on debts and the vague catchall category of ‘other expenses.'”

If you want to get people’s blood boiling, show them this chart. People like to blame the fed for wealth inequality, but the tax code also plays a big role.

I don’t think it’s right that someone like Bezos can make $46 million in income and not pay a dime in federal income taxes, but I also don’t know how you solve the bigger issue, which the chart above shows. Are you supposed to tax people on their stock gains if they’re not selling? Imagine that the value of Bezos’s shares increases by $10 billion one year, and he pays taxes on that. What happens if, in the next year, the value of his shares falls by $10 billion? Does he get a refund?

I understand why these conversations are emotionally charged, but these things are more complicated than we make them out to be. I’m not thrilled by this report, but when we’re yelling about billionaires paying their fair share, and they should, we should also talk about the good that they do.

How much money have some of these people created by, in some cases, employing hundreds of thousands of people? And how much money are they giving away to charity every year? Buffett, for example, plans to give away 99.5% of his wealth. In 2018, Mike Bloomberg paid $70 million in taxes or roughly 4% of his ~$2 billion in income. A Bloomberg spokesperson said, “taken together, what Mike gives to charity and pays in taxes amounts to approximately 75% of his annual income.”

I’m not saying the bad outweighs the good or vice versa, but I don’t like the idea of vilifying one group of people. This “us against them” mentality is dangerous for a society that’s already on shaky ground.

Yes, I think billionaires should pay more in taxes, but I think a more productive way to have this conversation and actually to create change is to bring people up, not tear them down. We could tax the top 25 families at 50%, and it wouldn’t close the wealth gap. This might make some people feel better, but it wouldn’t make their lives better.

We’re not all going to agree on this, but here are some things I’d like to see happen. We need to improve our education system. We need to simplify the tax code. We need to give every newborn child $1,000 worth of stock. We need to pay employees in equity. We need to take care of people who lose their jobs in a recession. None of these things need to come at the expense of Jeff Bezos.

Josh and I are going to discuss this and much more on tonight’s What Are Your Thoughts?

Josh and Michael use YCharts when creating visuals for this show, as well as for many aspects of their business. What Are Your Thoughts viewers can get a 20% discount for YCharts by clicking here (new users only):