Inflation is an interesting thing. People who have an opinion before they see the data don’t update their priors once the numbers are revealed.

Imagine this for a second. General Motors reports revenue of $32 billion. One group of people argue that it’s understated, while another group argues that it’s overstated.

You would never see this because General Motors revenue isn’t personal. It doesn’t touch your life. It isn’t subjective. Inflation, on the other hand, is an aggregate number that everyone experiences differently.

Here are just some things that will impact your view on inflation: age, lifestyle, income, employment status, where you live, and how many kids you have.

Drilling deeper, right now, you’ll probably have a view that inflation is high if you’re buying a house or in the market for a new car. I’m not doing either of those things, and I haven’t really noticed much inflation in my personal life, other than gas. But I don’t drive too much, so it’s not something that’s hitting my bank account too hard.

If you asked me, “Do you see signs of inflation in your personal life?” I would say no.

“Guys, have you been to the grocery store?”

We’ve received several emails like this in the last few weeks, and I can confidently say that yes, I have been to the grocery store. And no, I really haven’t noticed any price increases at the grocery store. It feels like most trips fall in the same price range. To check myself, I looked at the “grocery store” category on my credit card to see if there was inflation in the aisles that I just wasn’t picking up on.  The data confirms my suspicions. 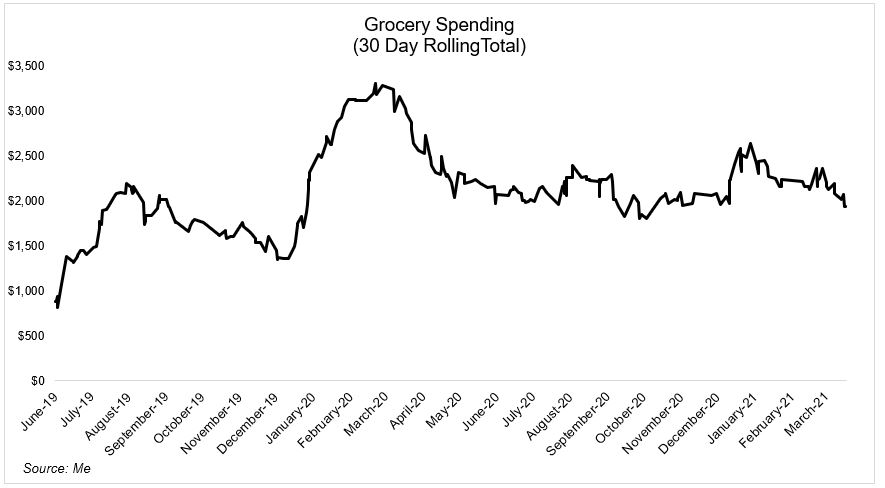 What does this mean? Nothing. The only thing this proves is that I do not see inflation at the grocery store. It does not refute aggregate data, but that’s the point. Aggregate data does not refute your own experience. Do you think a business owner would take comfort in the fact that CPI is 2% when their employees’ health care costs an additional 14% every year?

Some of the different opinions on inflation can be explained by political ideology, but mostly, everyone experiences their own inflation differently.

I spoke with Doug and Josh about my experiences at the grocery store and much more on this week’s The Compound and Friends.