The last time I wrote about non-fungible tokens, activity peaked a few days later. Like many casual observers, I thought that when the volume dried up, that would be the last we heard about NFTs. At least for a while. Well, it turns out the rumors of their demise have been greatly exaggerated. NFTs, once again, are on absolute fire. 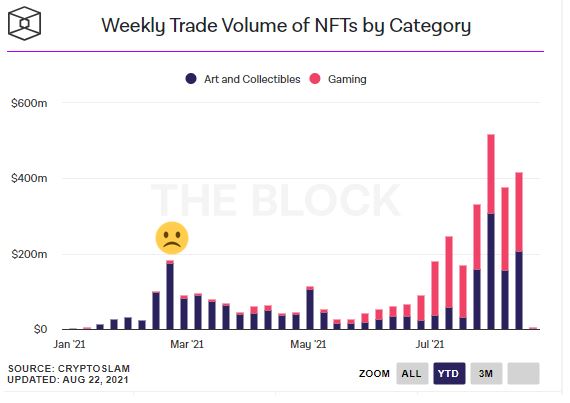 Remember back in February when a group of investors cobbled together $208,000 for a LeBron James moment. What seemed like an astronomical dollar amount just a few months ago seems quaint compared to some of the numbers we see today. 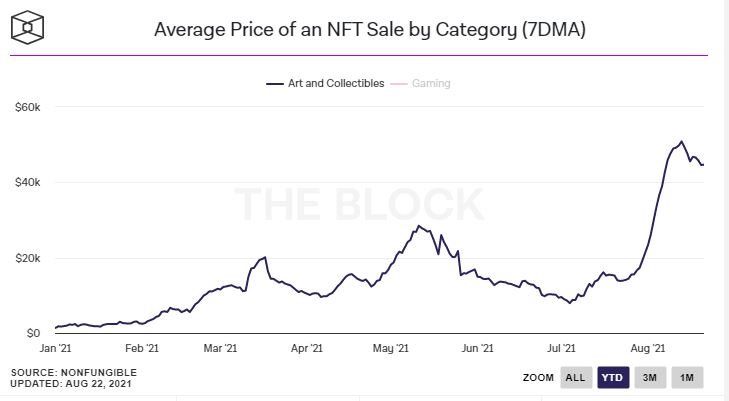 The most expensive CryptoPunk was bought for $7.58 million. It’s now listed for a cool 35,000 ETH, or $110 million. Most of these transactions happen on OpenSea, which just passed $100 billion in monthly trading volume.

The only thing crazier than how much some of these things are trading for is the speed at which they’re moving. Projects are going from “I’ve never heard of it” to selling for tens of thousands of dollars overnight. A few weeks ago, you could get a Bored Ape for less than 1 ETH. Now you can’t find one for less than 18 ETH ($58,373).

Last week, the token du jour was Pudgy Penguins. Kevin Roose even wrote a piece about it in The New York Times.

This week it’s Ether Rock, or “pet rocks on the blockchain.”

It’s normal to see this stuff and shake your head. I did. I still am. But you have to understand what’s happening here. This is purely a status symbol. There are only 100, and the more they go up in price, the more a purchase conveys that you can afford it. Packy recently wrote about this, saying, “Owning a Punk is a status symbol, like owning a Ferrari or an expensive handbag.”

YOU CAN DRIVE A FERRARI. YOU CAN WEAR A HANDBAG.

Exactly. That’s what makes this a status symbol. These things are completely useless. They might even be worthless. “And yet I can still pay a million dollars for this because a million dollars ain’t shit to me.”

You may not like it. You may not get it. But this is what’s motivating people with hundreds of thousands of dollars to burn on a status symbol that provides nothing other than status.

All of this stuff is incredibly confounding. On the one hand, you have normal people speculating on Doge, which is cute and mostly harmless. I mean, it says right there on the website that “Dogecoin is an open-source peer-to-peer digital currency, favored by Shiba Inus worldwide” Silly, sure, but hard to get too worked up over this. And then on the other side are wealthy people who buy pet rocks as status symbols. I understand this drawing your ire, but I hope now, or at least after reading Packy’s piece, that you understand people’s motivations.

And then, in the middle, you have brilliant investors like Chris Dixon who swear that this is web 3.0.

18/ The internet started out with so much promise, but over the last decade got taken over by a handful of giant, unseemly theme parks. We can build great cities, with thriving economies, to replace them. We have the tools, and the seeds have been planted.

It’s hard not to get distracted by the speculation, which is, frankly, a lot of nonsense. I mean, pet rocks? For a million bucks? I understand, but I just don’t get it. But if you can compartmentalize the insanity and open your brain to what’s being built, it’s hard not to get excited about where this is going. Especially when you see applications like this.

Between crypto, DeFi, NFTs, and DAOs, there’s a ton of things happening. Too much for any one person to follow. Sure, some (most?) projects will crash and burn, but I’m going to keep an open mind and not be too dismissive, even if some of this is beyond my wildest comprehension.

And if you think things are crazy now, just give it a week. We can’t put the genie back in the blockchain.