If you’re reading this post, you’ve almost surely heard about CryptoPunks, the most expensive Non-Fungible Token in all the land. This week, they went mainstream, with the announcement that Visa spent $150,000 on CryptoPunk #7610. The first time I tweeted about these little pixelated characters, probably when I first learned of them, was back in February of 2021. At the time, the floor price was 18.4 ETH, or $36,000.

The conviction here is truly something to behold.

Is this a bubble? You might think the answer is an obvious yes, given that the volume on OpenSea was under $100 million in May, and it’s over $2 billion so far in August. 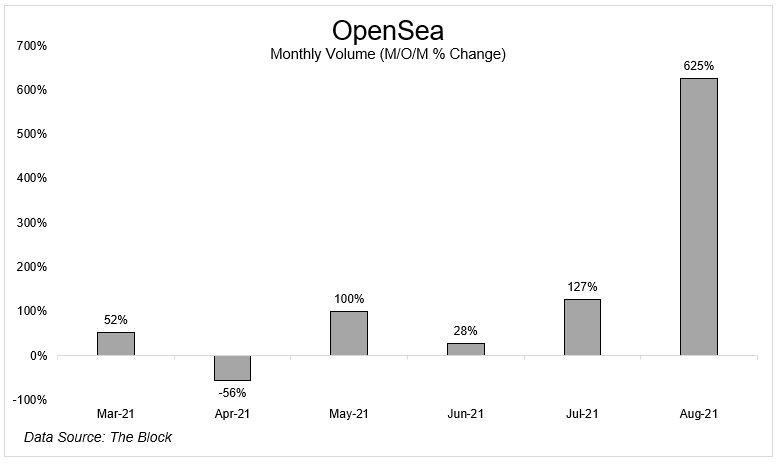 30 minutes ago CrytpoPunk 6947 sold for $645k. Another one went for $873k an hour ago. So yeah, understandably, you probably think this is a bubble. But ask yourself, is “everyone” you know talking about CryptoPunks? What would your spouse say if you asked him or her what they thought about them? What would your friends say? They probably would say “What the hell is a CryptoPunk?”

Combine this with the fact that 90% of collectors are refusing to sell, despite an offer of $300k and the prices might stay higher for longer than we think.

If I were able to bet on the market cap of NFTs collectively falling by 50%, I’d surely take that bet, but I wouldn’t underestimate the community aspect of certain projects. There’s something special going on here, clearly, and nobody wants to be the person that breaks the ice and lists below the current floor price. Once that happens, and again I’d bet that it will in most of these projects, then the speed at which prices decline will be breathtaking.

Another aspect to consider here is, as I’ve mentioned before, is that ETH are chips in a casino.

A few weeks ago I was playing craps and had hundreds of dollars spread all over the table. If I was using paper currency to place my bets, there’s no way I’d behave that way. Most of us see $310k and literally cannot process this. But the buyers don’t see the dollars. They see the ETH. And according to to data from Glassnode, there are 6,400 addresses that hold more than 1,000 ETH. So why wouldn’t they spend 100 ETH on something that gives them social status and other non-quantifiable benefits?

Here’s my final thought that I think is really important. You, me, everybody probably had the same reaction when they first learned about CryptoPunks:

“Wait. Is this a joke? People are paying tens of thousands of dollars for this? Can’t I just take a screen shot? I don’t get it.”

That’s a perfectly normal reaction. Like I said, that’s how I first responded. But when it comes to new ideas, a healthier attitude, a more profitable attitude*, is healthy curiosity rather than downright skepticism. Now I understand that most people are born with a certain disposition. We are who we are. But I think we should all strive to be a little more open minded when it comes to things we don’t understand.

This is more of a general observation and less of a “go out and buy JPEGs and you too can get rich.”

Have a nice weekend. See you on OpenSea 😃

*There’s a whole other post about being curious versus being a skeptic. I shouldn’t even write “versus” because it’s not one or the other. You can curious about certain things and skeptical about others.