$5,000 was stolen from my digital wallet tonight. I’ll explain what happened, but first, a little background.

I’ve been playing around in the cryptoverse for the past year. I first purchased Bitcoin in June 2020. Then I bought Ether, found Top Shot, OpenSea, minting, and staking.

This is a wild world, and I had no idea where I was going. I was completely lost, but thanks to Packy McCormick, some of the terrain slowly came into focus. Packy was my shepherd, and my friend Justin Paterno was my digital sherpa.

I started following more people in this new universe and picked up a few NFTs on OpenSea along the way. I never went shopping, I don’t shop, but when I saw people tweeting about a certain item, I would check it out. Nine times out of ten, the items were way out of my price range. I wasn’t looking to spend more than .1 ETH, or .3 if I was really feeling the FOMO.

I’d be lying if I said I was doing this for the culture or the community. I had a dual mandate: Learn what the heck was going on, and buy some lottery tickets hoping that one would hit. I probably spent $2-3k on various JPEGs over a 9-month period with no monetary gains to show for it. And then I got lucky.

A few weeks ago, I bought an NFT from one of my favorite writers, Mario Gabriele. He dropped a project called Philosophical Foxes on OpenSea. With this purchase (.2 ETH), I just wanted to show my support and say thank you for all of the great work he’s done. I didn’t expect this to be a winning ticket.

When I went to sleep that night, I saw the floor (the lowest asking price) was over 3 ETH. “Holy shit,” I thought. I wanted to sell, but I wasn’t sure if this was a jerk move. But then I saw that Mario got paid every time a transaction occurred and was like, “Oh cool, if I get paid, he gets paid.” Again, I’m not sure what the unwritten rules are here, but I listed my fox for 3.9 ETH and went to bed.

I woke up and saw that my fox had sold. A 20 bagger in 6 hours. Literally the best trade of my life. I couldn’t believe it. I told my wife we made $14,000 while we were sleeping.

She had no idea what I was talking about but told me that if I didn’t take the money out of my digital wallet and into my real one, it was all make-believe. So, I transferred $12,000 out and figured I would play with the other 2.

Last month an Animal Spirits listener put me on to Olympus. I thought this was a neat project and hadn’t done anything like this before, so I put $2,000 into it. But to get in, you had to join the Discord group. What’s a Discord? Packy and Mario did a killer piece this week describing what this place is all about for those unfamiliar.

Imagine a place where dank memes flow like honey.

Imagine a place where potatoes thrive.

Imagine a place where humans and bots live in harmony.

That “humans and bots” line is hitting different right now. I’ll explain in a second.

A few months ago, Justin told me to register an “ENS name.” I claimed michaelbatnick.ETH and hadn’t thought of it much since. That is until two days when I experienced my first airdrop. The feeling was pure ecstasy. I received 40 tokens (currently valued at $55 a token) just for being a customer. The number of tokens each user received wasn’t random. It was based on a few criteria, like how many domains you registered and how long you registered them for. With this experience, I felt like I could see the future. I got it.

I’ve probably spent a full year of my life on Twitter. Maybe more. What do I have to show for it? Okay, maybe a bad example. Twitter has been great for me. But the point is that in Web 2.0, all the value accrued to the platform. With this image, Packy showed where we’re going. 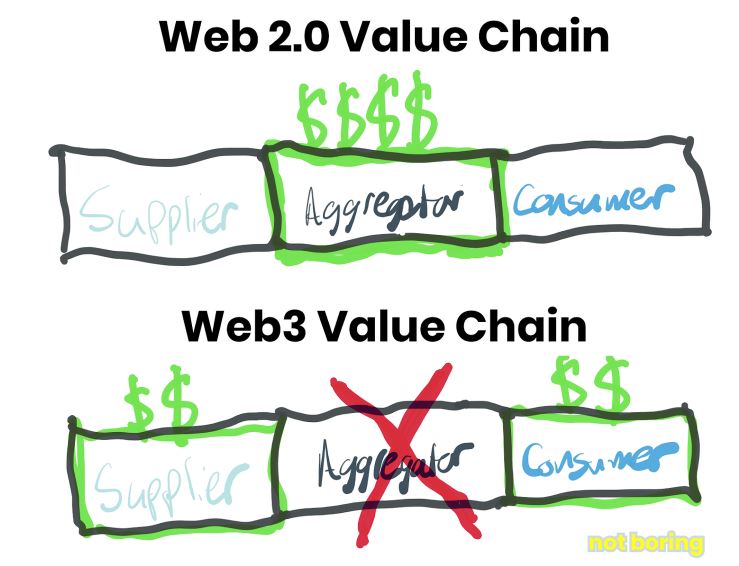 It took Twitter 147 years to come up with Twitter Blue. If it were a DAO, its users would participate in the company’s economics and governance. Some sort of edit button would have been implemented a decade ago.

But it was all a dream.

A couple of hours ago, I saw a big notification pop up on my PC as I was wrapping up. It came from Discord. I’m an older millennial, but in this alternate universe built for gamers, I truly feel like a boomer. I have no idea what’s going on and find it virtually impossible to navigate. I spend zero time on the server. That’s a full-time job, and I already have a few of those.

But when I saw this notification pop up, it said something like “Olympus DAO Airdrop.” So I hit the notification, which took me into this social metaverse. I clicked the link, which directed me to a site that I recognized. Except the link came from a bot, and the familiar-looking site it took me to was a knockoff. I should have known because they asked for my secret recovery phrase when I tried to connect my MetaMask wallet. And damnit, I fell for it.

I basically handed robbers the keys to my house and gave them the alarm code. Here was my reaction when my wallet didn’t connect. 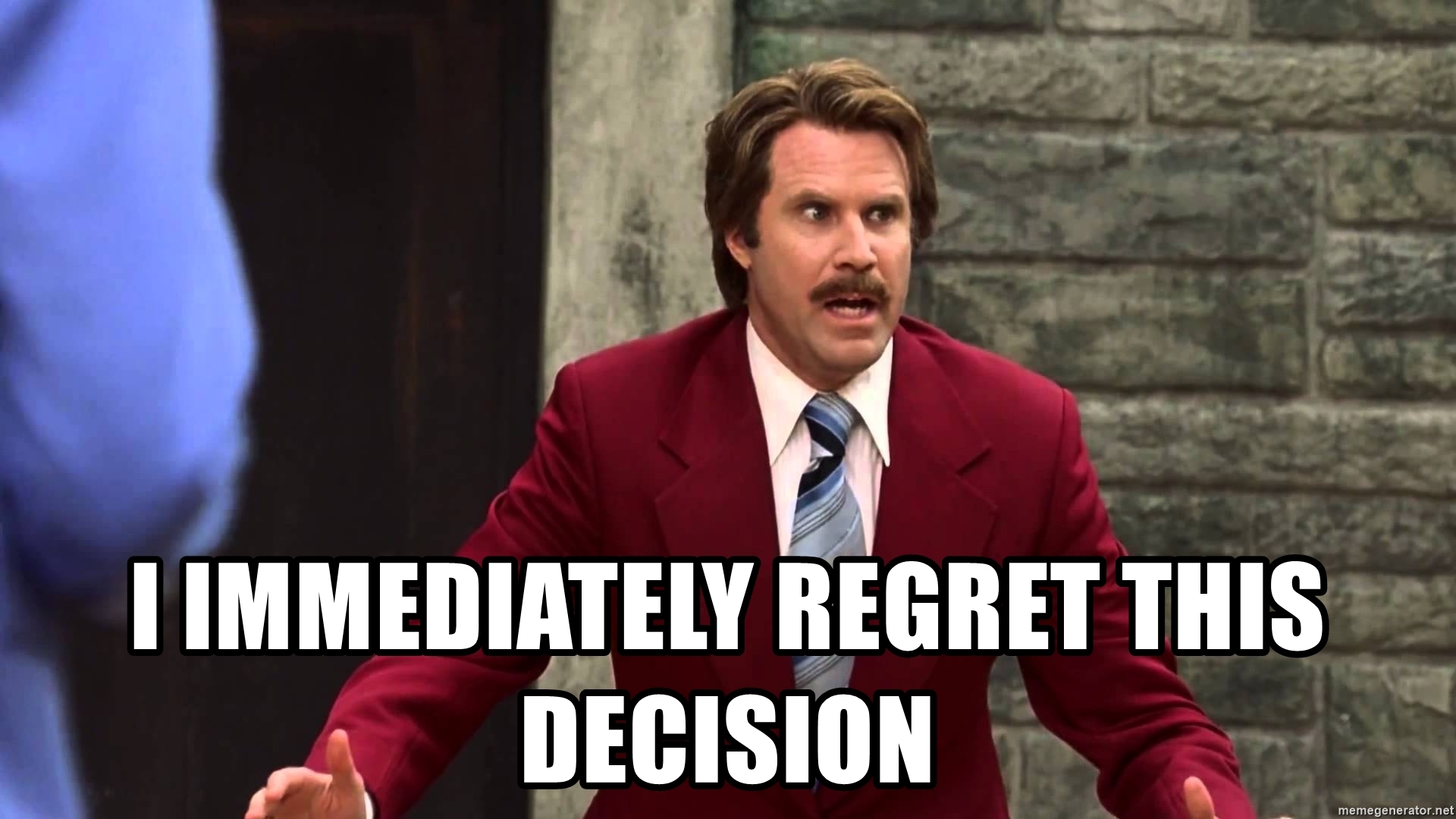 Thirty seconds later, when I opened my wallet, my OHM (Olympus tokens) were gone. I reset my password, but it was too late. Everything was gone. My ETH and my sweet, sweet ENS. 😢

The first thing I did was call my wife, Ben, and tell him what happened. We had a good laugh.

The lesson, and it’s a painful one, is never under any circumstances enter your secret phrase into any other platform than MetaMask. At least that’s the lesson I’ll take away. I’m sure crypto native people will say that this is the wrong lesson, but for the “normie” reader, you, please let this be your key takeaway.

Thanks to Mario’s fox, I’m still ahead financially, but I’d be lying if I said this didn’t hurt. A couple of hours later, the pain has mostly subsided, but it still stings a little.

I’m lucky I can say, “it’s only money.” And I’m lucky that this loss won’t impact my family or me.

I have no one to blame. I fell for the oldest trick in the scroll. Hopefully, my dumb decision prevents you from doing the same. Have a nice weekend.