The stock market has been a treacherous place for the last few months. You wouldn’t know it by looking at the indexes.

I wrote this opening salvo earlier in the week when the S&P 500 was hovering near all-time highs. This morning, due to a new variant in South Africa, stocks are selling off sharply. The Dow Jones Industrial Average, the people’s index, is down over 1,000 points, sitting 5% below the all-time highs from earlier this month.

It’s been a while since we’ve seen these names on the leader and laggard board and I was hoping to never see it again. Unfortunately, here we are. 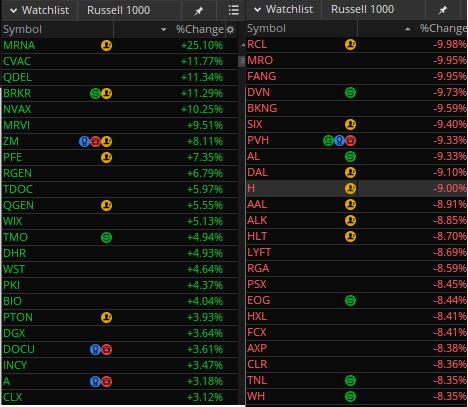 This post was initially intended to look at the difficulty of owning individual stocks, so that’s what I’m going to do.

The inspiration for this came from all the carnage that we’re seeing in growth stocks. 2020’s darlings are getting absolutely annihilated. And then there is the retail wreckage that’s currently going on. Nordstrom fell 29% on Wednesday after reporting disappointing earnings. Gap fell 24% that same day. Both stocks are sliding further today. What do you do when a name you own sheds a quarter of its value while you sleep? Do you buy bail? Do you buy more?

Seeing this type of wreckage is the periodic reminder I personally need that stock picking is really, really hard.

I’m a big proponent of index funds. This doesn’t mean I disavow active management, but I think most people should get most of their exposure to stocks through an index.  Picking stocks is hard, time-consuming, and emotionally exhausting. Even if you are able to outperform, it’s probably not worth the time necessary to achieve said outperformance. Tens and hundreds of hours to maybe beat the benchmark by a few percent doesn’t seem like a great trade. Unless it’s your passion, in which case you probably already stopped reading.

My favorite piece ever on the difficulty of stock picking, one that I’ve referenced several times on this blog, comes from the team at JPMorgan. This data point hit me over the head the first time I read it and still does today.

More than 40% of all companies that were ever in the Russell 3000 Index experienced a “catastrophic stock price loss”, which we define as a 70% decline in price from peak levels which is not recovered

If that doesn’t put the fear of Warren Buffett into you, I’m not sure what will.

I’m not an index zealot. I have fun playing with the market, even when I’m losing. But you can’t argue with the data, and the data says that beating the market, while possible, is a game that should mostly be played for fun.