As I thought about the ten lessons I would reflect on in 2021, I realized this would be a difficult exercise. Possibly pointless. That’s because lessons are timeless, but annual observations are ephemeral. Markets are a game where the rules are constantly changing.

Annual lessons are just observations of a moment in time. In 1995, you would have observed that it paid to buy the most expensive stocks. That would have been reinforced in ’96 and ’97 and looked like gospel by ’98. But buying the most expensive stocks was just a way to win that particular game at that particular time. Nobody rang a bell in March of 2000 and told you the rules were about to change.

What makes this game fun and exciting is that there is no handbook where we can observe the rule changes. All we have are numbers on a screen. When something that worked for 30 years stops working, how long before we pick up on the shift? We might notice something different over the course of a year. Debates will start raging after 3 years. After 5 years battle lines have been drawn. After 10 years, we still don’t know if what worked is dead or just laying dormant.

Few things in the market are permanent, so take what I’m about to say with a grain of salt. It’s likely that some items on this list won’t age well. I’m also going to move quickly, so you’ll forgive me if I leave the necessary nuance on the cutting room floor. Not trying to make this a 10,000 word article. Alright, here we go. 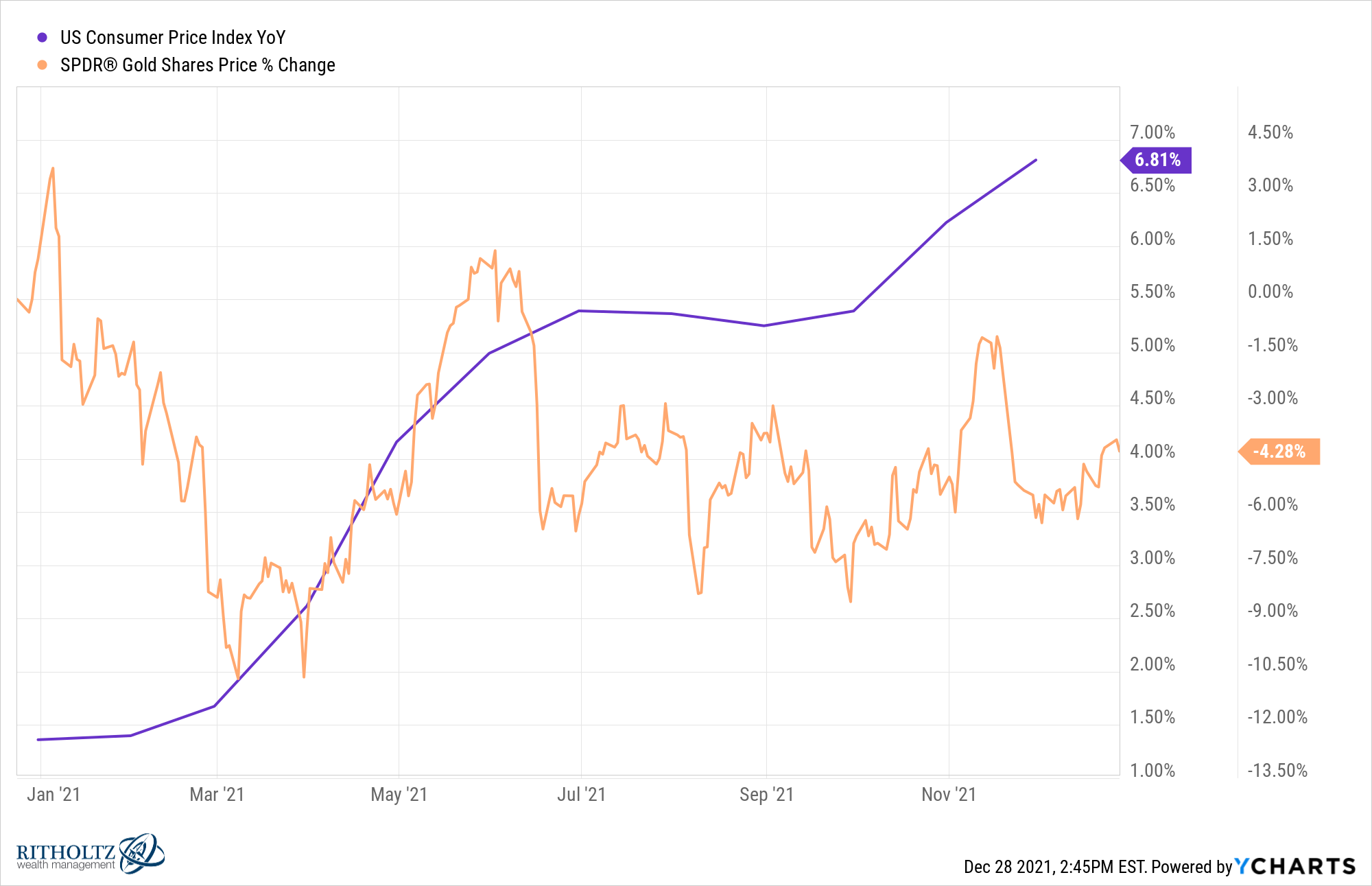 The last few years saw a record amount of money printing and inflation like we haven’t experienced in decades. Gold enthusiasts could not have teed up a fatter pitch.

Copper returned 26%. Agricultural commodities (DBA) gained 22%. A broad basket of commodities (DBC) gained 42%. And yet, sad trombone, Gold fell almost 5%. To add insult to injury, bonds, which are allergic to inflation, only fell 1.75%.

In the worst inflationary environment since the 1970s, bonds outperformed gold. If this doesn’t shake your convictions, nothing will.

Valuations don’t matter. I know, I know, but hear me out. I’m talking about at the index level. People have been citing the CAPE ratio for a long time as to why stocks will deliver lower long-term returns. I include myself in this group. Although, in my defense, I never used CAPE as a scare tactic or told people to avoid stocks. I just suggested returns would be lower. 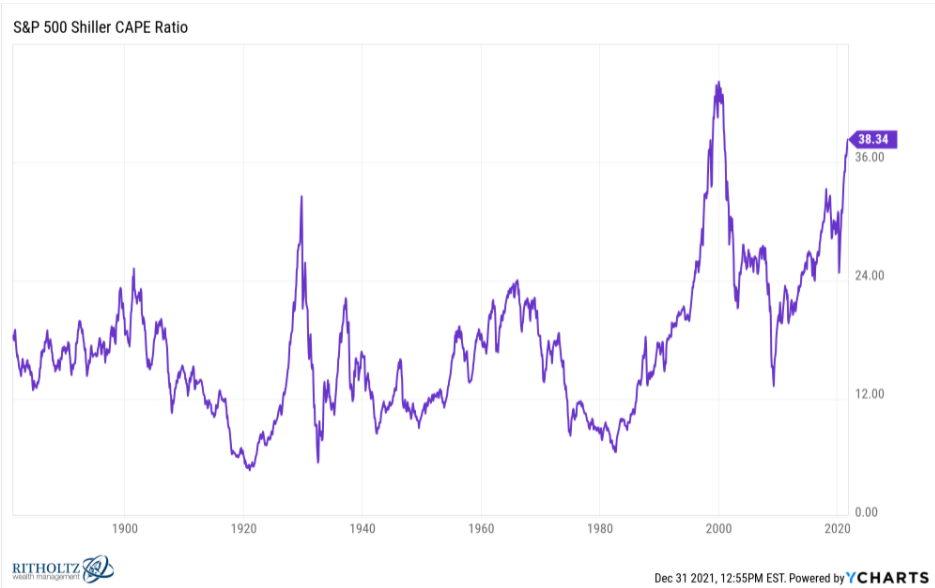 Sorry, I’m about to talk out of both sides of my mouth. Of course valuations matter. They have to. The more you pay for something, the less you should expect to receive. All else equal. But it’s never equal. And that brings me to my next point.

Strong earnings can support high valuations. Especially when interest rates are near zero. And this has been the main story of the last decade, in my opinion. 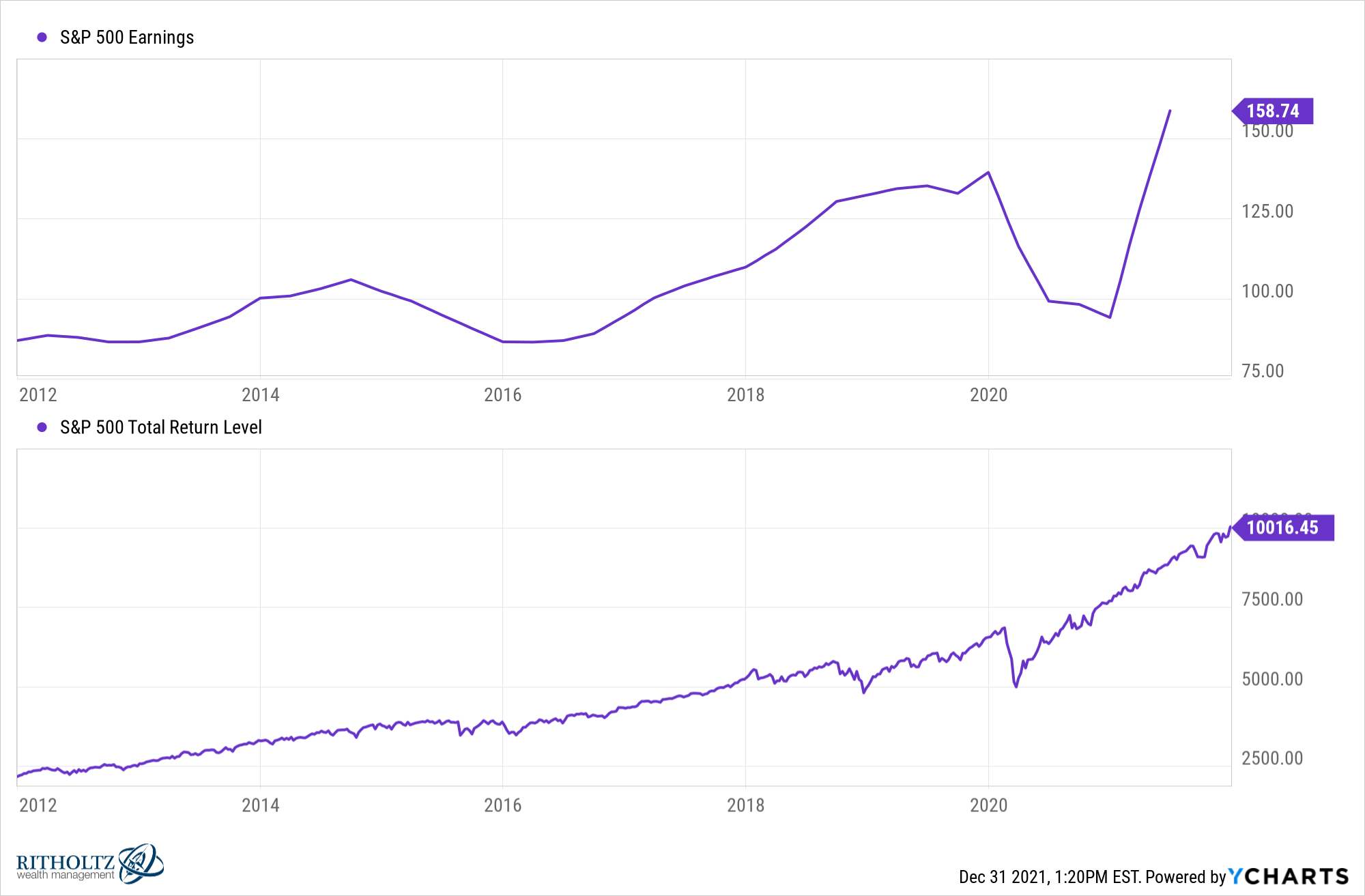 Absent the earnings recession in 15-16 and the earnings massacre in the pandemic, businesses have been on an upwards trajectory. And stocks have followed. Many of you remember stocks going sideways from the winter of 2014 to the summer of 2016 as earnings dipped.

I GuEsS iTs DifFeReNt tHiS TiMe was a trope that the bears have leaned on over the last few years instead of doing critical thinking. The thing that truly was different this time is that the growth in the largest stocks were completely supported by their fundamentals. Amazon, Apple, Facebook, Google, and Microsoft have grown their earnings at 32% PER YEAR FOR THE LAST 5 YEARS. Maybe this is as good as it’s gonna get, but this is the simplest and best explanation for why the S&P 500 has had such a tremendous run.

Bull markets can last longer than you think. From 2012-2014, the S&P 500 gained 16%, 35%, then 14%. Somewhere in that time the bears became vocal about valuations and profit margins and a whole host of other issues. The market has spent the last decade climbing this wall of worry. 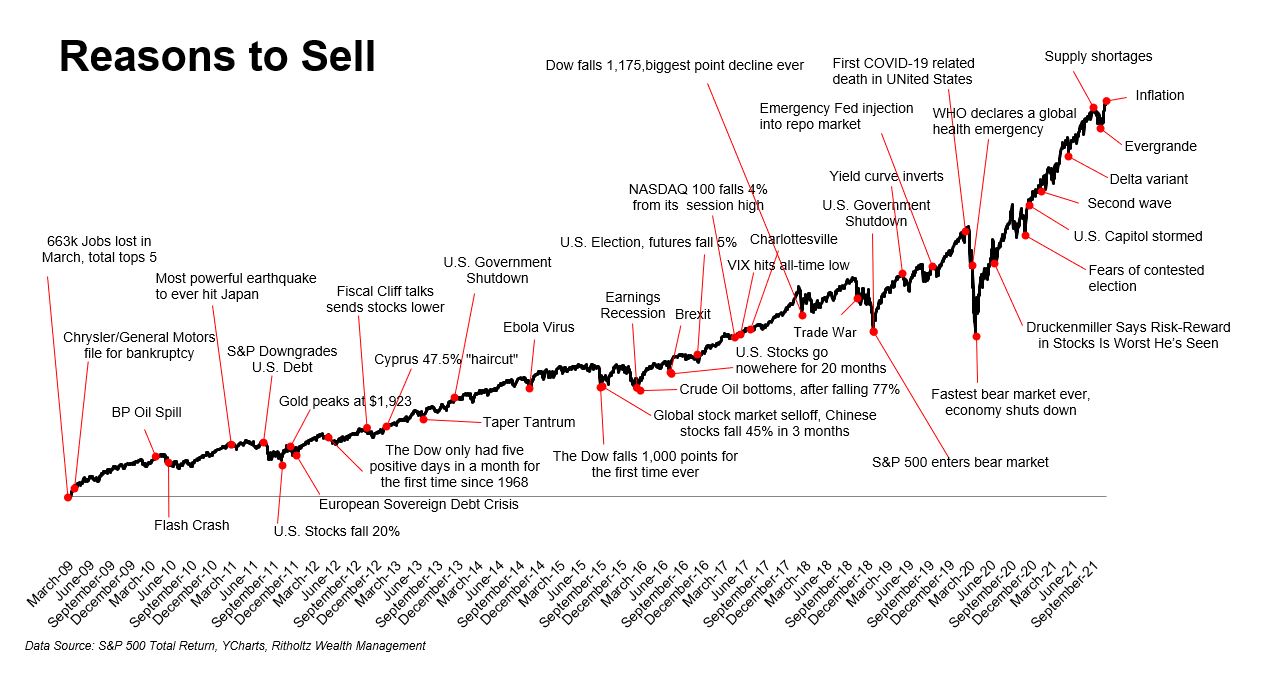 If you’ve thought this bull market can’t possibly continue, you’ve been proven wrong. Eventually you’ll be right. But can you survive being wrong? Investing is a marathon even though it feels like a series of sprints.

The market doesn’t have to stop going up when bubbles pop. One of the biggest stock market stories of the year was the reversal of high-flying stay-at-home stocks. Zoom and Teladoc are both 70% below their highs. There was a school of thought that said when these bubbles pop, it’s going to take the rest of the market down with them. With 70 all-time highs in the S&P 500 this year, clearly this has been proven to be false.

Experience is overrated. Especially in a bull market. The performance of these hedge funds, which have a collective 4,700 years in the market hammers this point home pretty well. 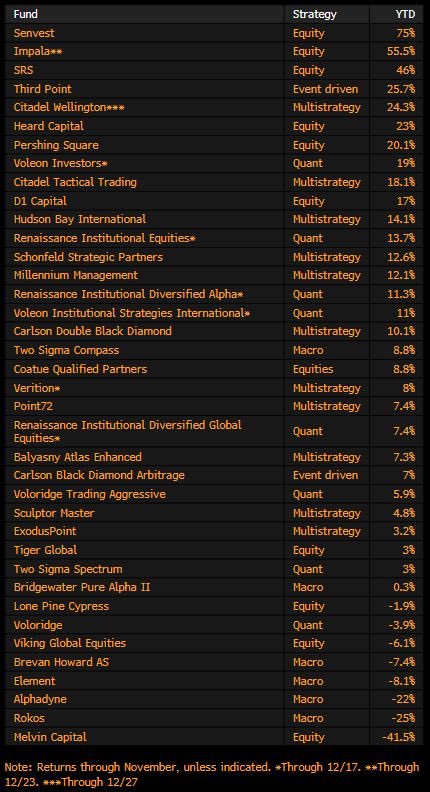 Experience tells you that this will end badly. And eventually it will, it always does. But again, can you survive when you’re wrong?

To quote myself, “The greatest lesson we can learn from history is that those who learn too much from it are doomed to draw parallels where none exist.”

Skeptics sounds smart. Optimists make money. As I said at the top of this post, my reflections and lessons of this year are a time capsule of the current environment. An environment that might change as soon as I hit publish. Sure doom and gloomers will look like soothsayers from time to time, but I don’t know anybody who got rich fading the human spirit. Don’t short capitalism.

It’s easy to be a knee-jerk skeptic. In fact, that will probably serve an investor well. Shiny objects can be dangerous. But a healthier attitude, especially in a bull market, is to be knee-jerk curious. “Metaverse? What’s that? Sounds dumb, but maybe it’s worth investigating.”

Shoeshine indicators are completely dead. A year and a half ago, a plumber came to my house and started talking about the stock market. It felt like a “sell everything” moment. Sure, a lot of the names he was trading went to crap, but the market is up 50% since that time. If I used that as an indicator to go to cash, I’d still be waiting to get back in.

Avoid extremes. Never go all in or all out. Both lead to extreme thinking, which leads to extremely bad outcomes. It’s one thing to say, “crap, I guess I can’t handle a portfolio of 80% stocks, I’ll dial it back to 60%.” It’s a whole other thing to say, “crap, I can’t handle the volatility. I’m gonna go to cash until things settle down.” One person is going to survive the ups and the downs and the other person isn’t.

People are starved for yield. With inflation running as high as it has, it’s incredible what’s happened to interest rates. This is another chart that should make you question everything you thought you knew about how markets function. 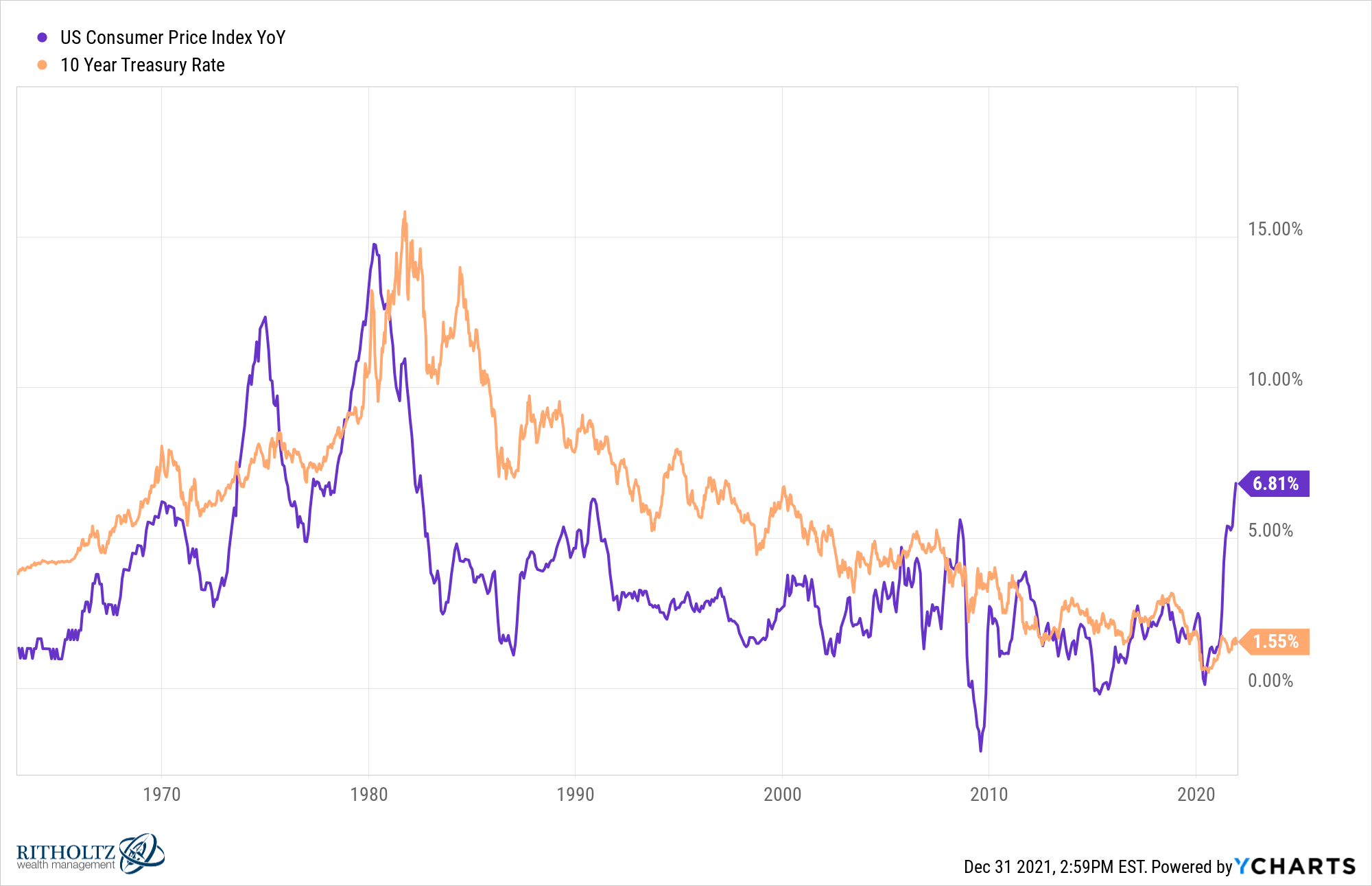 Inflation is running near 7% and the 10-year couldn’t get higher than 1.75%. This chart from Eric Balchunas shows $209 billion flowing into fixed income ETFs in 2021, despite a 2% loss, and with the fed telegraphing 3 rate hikes in 2021. 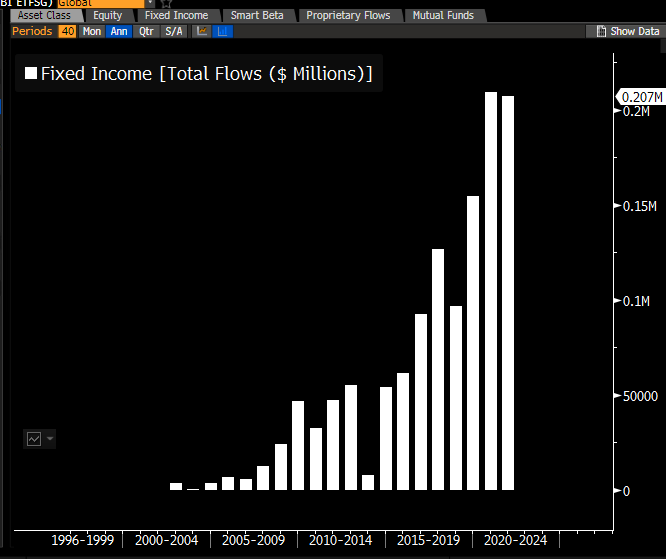 There’s a record amount of money out there and all of it needs a home. I could be wrong, obviously, but if I had to guess, I’d say the 10-year doesn’t get above 3% for a long time.

Wishing everybody a happy and healthy new year. Thank you very much to all of you who took some time to read my stuff this year.