If I gave you information from the future, how confident are you that you could beat the market?

I wrote about this concept last week, focusing on how great Netflix the business has done, versus how poorly Netflix the stock has done.

If you knew in 2018 that over the next ~4 years Netflix would double its revenue, add 90 million global subscribers, win multiple Oscars and Emmys, quintuple its income, and see operating margins double, how much stock would you have wanted to buy? However much was too much, because the stock has done nothing other than make a nasty roundtrip.

I’ll give you another one. If in 2019, someone were to tell you that there would be a global pandemic that would put the economy into a medically induced coma, sending the unemployment rate to 15%, the highest level since The Great Depression, and real GDP falling 9%, also the lowest levels since The Great Depression, how would you have allocated your portfolio? You probably would not have been prepared for a world where the S&P 500 gained 19% on the year. Or one where the Nasdaq-100 gained 49%. In one of the worst years ever for the economy, like literally ever, the Nasdaq went up by half.

This is why investing is so hard. Even if you had all the information, there would be no way to process how market participants would collectively respond to it.

This is how markets have always worked. John Maynard Keynes wrote about this in 1936.

Professional investment may be likened to those newspaper competitions in which the competitors have to pick out the six prettiest faces from a hundred photographs, the prize being awarded to the competitor whose choice most nearly corresponds to the average preferences of the competitors as a whole; so that each competitor has to pick, not those faces which he himself finds prettiest, but those which he thinks likeliest to catch the fancy of the other competitor, all of whom are looking at the problem from the same point of view. It is not a case of choosing those which, to the best of one’s judgment , are really the prettiest. We have reached the third degree where we devote our intelligences to anticipating what average opinion expects the average opinion to be. And there are some, I believe, who practice the fourth, fifth and higher degrees.

Traders make all kinds of convoluted wagers to hedge against certain outcomes. Right now all eyes are on interest rates and what the fed is going to do with them. Wouldn’t it be great if, instead of betting how gold or USD or stocks will react to an announcement, we can just bet directly on the announcement itself?

Thanks to Kalshi, now we can. With this platform, you can bet on everything from CPI to the Grammys to weather. Before going further, I need to disclose that I am a shareholder in the company. More below.*

Markets didn’t believe that the fed was going to raise rates until only recently. One month ago, there was a 45% implied probability that the fed wasn’t going to move in March, keeping the target rate between 0-25 bps. Now there’s zero chance that happens.

You can see how market expectations are changing over time on Kalshi. The green line shows “yes, there will be a rate hike in March,” which you could have gotten for even money at the end of December. Now, at 95 cents, it’s all but a foregone conclusion that they’re going to raise. Which is why I’m going the other way. Risking $100 to win ~$5 doesn’t appeal to me. Risking $20 to make $290? Now we’re talking. I’m probably going to lose, but like the NY lottery says, “Hey, ya never know.” 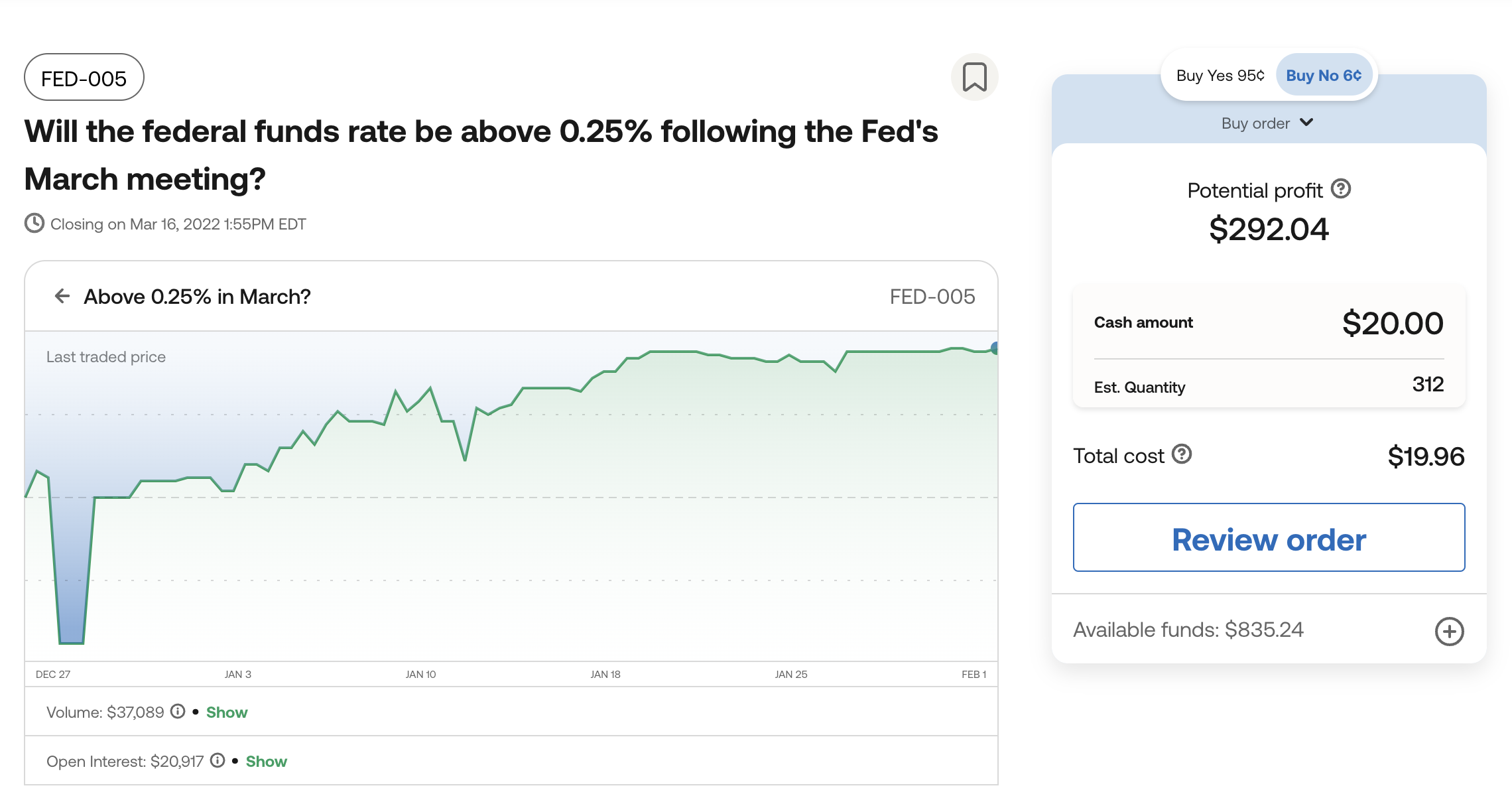 Markets tend to price things pretty well. I wanted to make a bet on 2 rate hikes by June, but the problem is, everyone wants to make that bet. “Yes” is trading at 91 cents. No thank you.

The good news about these contracts is that they’re liquid. So if for whatever reason, the fed signals that they’re not going to hike in March and the “no” spikes from 6 cents to 95 cents, I can get out before contract expiration.

Banks are putting out some wild forecasts on where rates are going to go. JPMorgan calling for 5 hikes this year. Goldman’s at 7. I’m at 2-20. Josh and I are going to get into this and much more on tonight’s What Are Your Thoughts?

*We had Tarek, Kalshi’s co-founder and CEO, on Animal Spirits a couple of months ago and were blown away by the product. We wanted to work with them as users and shareholders to help make a better user experience and make sure that people know about it.