“The early-stage continues to resemble the late stage of years past.”

That’s quite the lede from Pitchbook’s 2021 VC Valuations Report. As Yogi Berra once said, “It’s getting late early.”

According to this report, the median early-stage valuation jumped 50% YoY to $45 million in 2021. “This value represents a higher median than the late-stage just a few years ago and illustrates the tsunami of capital that has flowed into the venture strategy.” 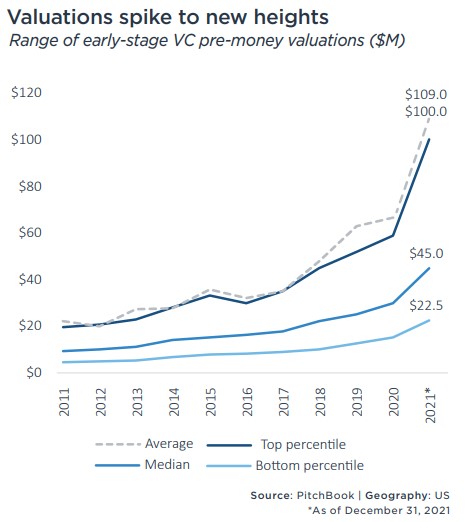 There has been a massive transformation in private markets over the years. The story that drove the money was compelling; Part of it involved low rates and cheap money. Another driver was the cost and hassle involved in going public.

Growth equity wasn’t really a thing in the 90s when the hottest companies like Amazon were going public at half a billion-dollar valuation. Today, private companies big enough to be in the S&P 500 still need to tap the equity market. Only they’re doing it with venture dollars instead of taking money from the public.

Series E rounds at $60 billion make sense when viewed through this lens. But what about early-stage rounds at $45 million. Has everyone lost their mind? I don’t think so. Companies have demonstrated an ability to go from zero to hundreds of millions of dollars in revenue at record speed. All these factors brought us to the place where 231 early-stage deals were raised at valuations of $200 million or higher last year. Just five years earlier, only 24 companies could make the same claim.

The transformation in private markets has led to a massive shift in public markets, particularly with companies that were private just a few years back. Traditional venture capitalists and especially crossover investors pushed these companies to dizzying and unsustainable heights. Gladiators are now mowing down these young companies that recently entered the public arena.

Take Amplitude, a behavioral analytics SAAS company that went public last September. On Thursday, they reported earnings and guided towards 35-40% revenue growth for 2022, below the 43% consensus. The stock got annihilated. $41 one day. $17 the next. The company is now worth just half of its last private round (H/t @buccocapital). A 60% decline in a single day is insane, but crazy moves like this are becoming common.

With rising interest rates and inflation, investors are more selective about when they’ll get their money back. Said differently, they’re killing the same stocks they were willing to subsidize nine months ago. DraftKings posted guided to an adjusted loss of between $825 million and $925 million for the year, compared with $676.1 million a year ago. The story with DraftKings is straightforward. Acquiring customers in that space is expensive and super competitive. Investors aren’t having it. DraftKings was already down 70% from its highs heading into earnings on Friday. After a disappointing number, it crashed 22%.

With all these young public companies blowing up, the big question is how long before the same thing happens in private markets?

It might already be happening. The Information quoted Keith Rabois, a partner at Founders Fund, who said:

“If you have a high burn rate and have raised money at high prices, you’re going to run into a brick wall very fast. There’s no free money anymore.”

Numbers back him up. According to The Information:

“Crossover firms participated in just one global venture capital deal valuing a startup at over $5 billion in February, compared to ten in January and eight in December, according to data firm PitchBook. VC deals are usually made public more than a month after they’re initially struck. That suggests the drop in investing in late-stage startups, which usually carry valuations in the billions of dollars, may have started toward the end of last year, after tech stocks had started to tumble.”

Tiger Global, which invested more money in private companies than any firm last year, told its investors earlier this month “that it would no longer focus on backing large, late-stage startups preparing to go public…Instead, partner Scott Shleifer said the New York hedge fund would focus on investing in younger firms in Series A and B rounds.”

This strikes me as a big deal. If the most significant player in a social proof game is changing its behavior, the followers will get in line.

Late-stage companies will ultimately take their cue from public markets, I think. But it might happen slower than people expect. There’s still so much dry powder. 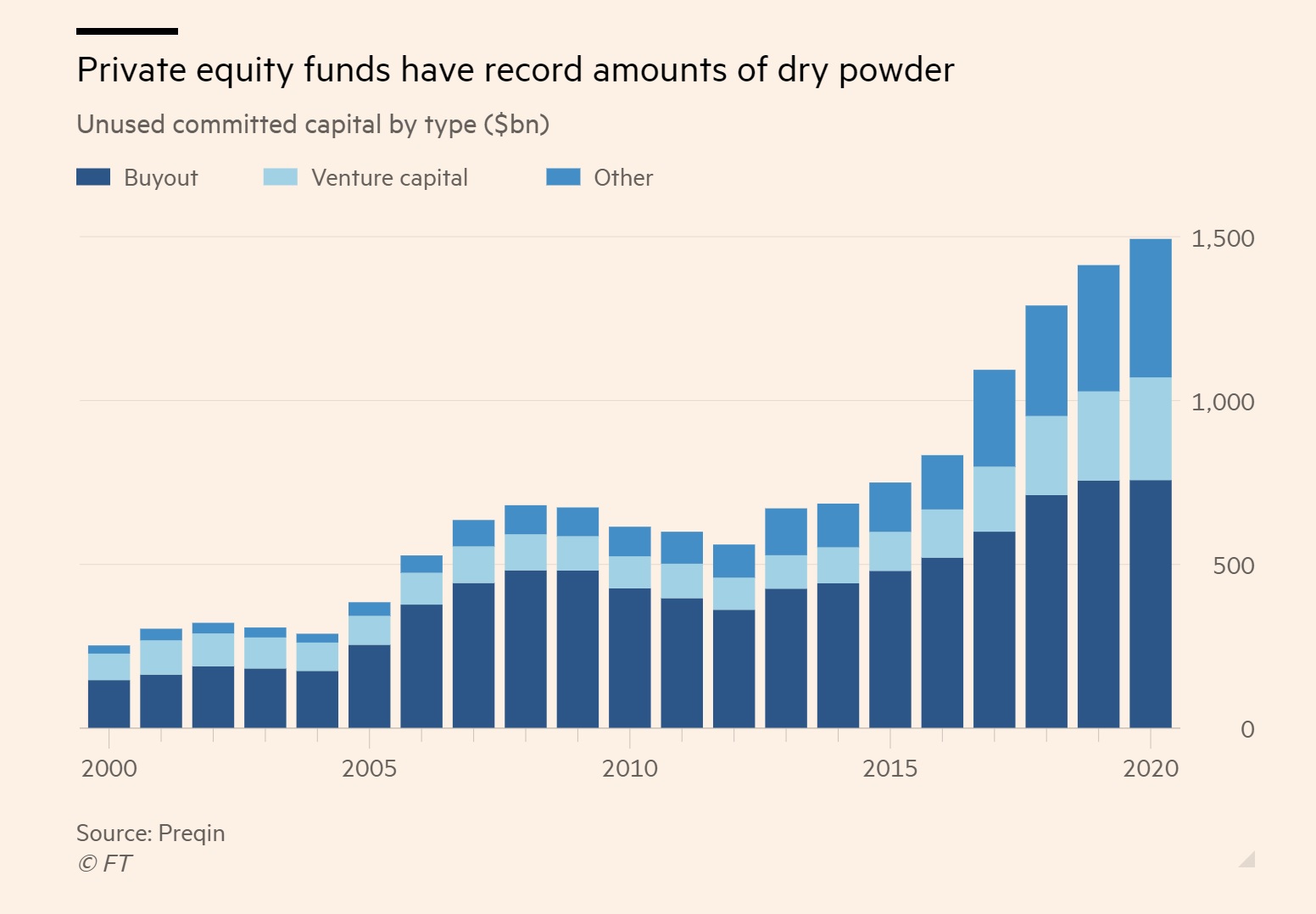 I think the early stage will be less impacted by public markets because seeds today are being planted for the next decade. And again, due to the liquidity sloshing around, I believe $25 million seed rounds can continue. Investors will continue to invest in exciting opportunities, and the earlier they are, the less they should be impacted by current events. But all bets are off if we enter a recession.

Private market valuations are no easier to predict than public ones. It’s logical to conclude that the Stripes of the world, which are public companies in private companies’ clothing, will be impacted. But who knows? I’m excited to see how all of this unfolds.